A Scheduled Monument in Billesley, Warwickshire 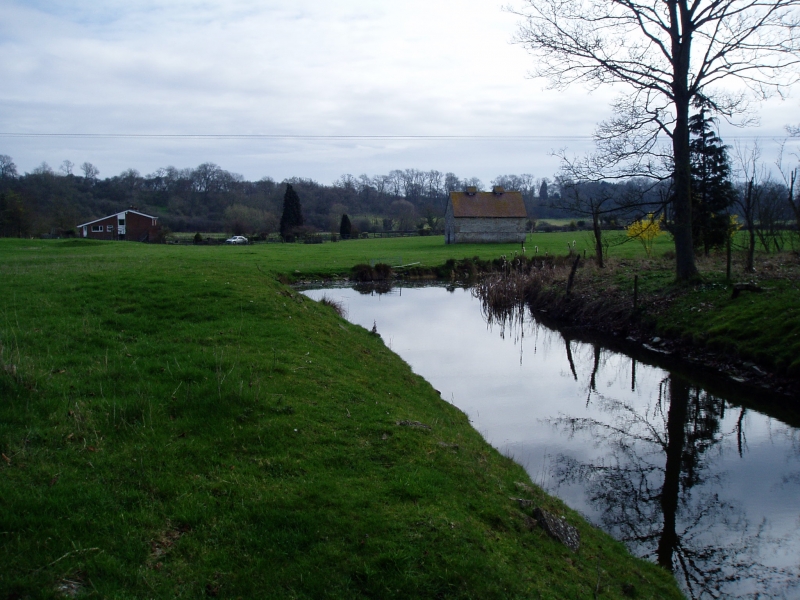 The monument includes the buried and earthwork remains of the medieval
settlement of Billesley Trussell and its associated medieval ridge and furrow
cultivation remains. Also included is All Saints Church and its cemetery.
The medieval settlement of Billesley Trussell was located 700m north of a
crossroads on the Roman road from Stratford to Alcester, to the south of the
church. The settlement lies in a valley of a tributary of the River Alne in an
area of underlying Lower Lias Limestone.
The settlement remains include an area of regular house enclosures (tofts)
and the allotments or garden plots associated with dwellings (crofts) defined
by banks and ditches measuring up to 0.75m high and 1m to 2m wide and laid out
on either side of a narrow green, or wide main street, leading from the church
towards a former fishpond complex near the stream. The main street is
orientated east to west and measures approximately 8m to 12m wide. The
fishpond complex has since been ploughed out and is not included in the
scheduling.
The building platforms of the tofts are best preserved on the northern side of
the street, where five are clearly visible, measuring between 15m and 20m wide
and approximately 20m long. Parch marks, created by the browning of grass
where its roots lie above buried stone remains, occur at the site and indicate
that the buildings were constructed from stone, which is relatively rare among
the villages of Warwickshire. Under dry conditions the foundations of several
houses are visible, some of the houses are of two cell construction and others
appear to be more closely related to long house type structures.
The crofts are regular enclosures lying behind the house sites, as wide as the
house platforms and approximately 30m long, although the rear boundary on the
north side has been obscured by modern farming. Those to the south of the road
are best preserved, lying between the road and the ridge and furrow
cultivation remains of the medieval fields. The regularity of the village
remains suggest that this part of the settlement layout was deliberately
planned. Until 1967 a single limestone cottage survived within a toft which
represented the last of the medieval houses of the settlement. The cottage has
since been demolished and replaced by a modern house which is excluded from
the scheduling, although the ground beneath it is included. In the western
part of the monument, lying at the head of the street, are the remains of the
moated site. The moat is water-filled on its northern, eastern and part of its
southern arms. The western arm was infilled when the post-medieval manor
house, built to the west of the moated site, was refurbished and the route to
the church diverted along the line of the western arm of the moat, slightly
impinging on the moated island. The moat arms are 2m to 4m deep, and 10m to
15m wide; a limestone rubble revetment or lining is visible around the
interior edge. The island measures approximately 40m by 30m, orientated east
to west. There are the remains of an external bank, measuring up to 6m wide
and 0.75m to 1.5m high, on the eastern and northern arms. The uneven surface
of the island suggests that the buried remains of buildings survive. These are
believed to include the manor house and its associated agricultural and
ancillary buildings. The moated site must always have been quite small and the
existence of the dovecote to the east of the moat, suggests that some
ancillary buildings were constructed outside the moat. The area of irregular
earthworks between the dovecote and the moat, and between the moat and the
church are believed to represent further buried buildings of the manorial
complex. The remains of at least two embanked enclosures can be seen on either
side of the moat, and another survives to the east of the dovecote. These may
represent stock enclosures associated with the demesne land of the manor.
Demesne land was land held directly by the lord of the manor and was often
farmed in enclosures, separated from the common agricultural system followed
in the open fields of the village. A restored Grade II Listed late medieval
dovecote stands 50m to the east of the moated site. The dovecote is excluded
from the scheduling, although the ground beneath it is included.
Billesley is first recorded in a document of AD 704-9, and again (with a
priest) in the Domesday Survey of 1086. From the 12th century the Lordship was
in the hands of the Earls of Warwick, but the resident lords were the
Trussells, from Osbert de Trussell in 1199, for 400 years. Tax records (lay
subsidies) of the 14th century suggest a high population, with at least 18
families resident in 1332. The effect of the Black Death, the decline in the
climate and the rise in profitability of sheep, appears to have caused the
desertion of Billesley Trussell during the late 14th to early 15th century. In
1428 the Lay Subsidy returns recorded only four people at Billesley, and in a
list of 1450 Billesley is recorded as being fully deserted, with only the
manor house remaining. Following the execution of Thomas Trussell in 1588, the
manor passed to Sir Robert Lee a merchant from London, who built a new house
(Billesley Hall) in 1610-20 to the east of the moated site, abandoning the
medieval house on its moated site.
Both church and churchyard are included in the scheduling. The church, which
is a Grade I Listed Building, is in the care of The Redundant Churches Trust.
It was recorded as being ruinous by Dugdale in 1624, but was partly rebuilt
for the Lee family in 1692, retaining some 12th century fabric and later
medieval windows and door.
All modern paths and surfaces, the modern house in the centre of the
settlement remains, the dovecote, and all modern post and wire fences
are excluded from the scheduling, although the ground beneath these features
is included.

Medieval rural settlements in England were marked by great regional diversity
in form, size and type, and the protection of their archaeological remains
needs to take these differences into account. To do this, England has been
divided into three broad Provinces on the basis of each area's distinctive
mixture of nucleated and dispersed settlements. These can be further divided
into sub-Provinces and local regions, possessing characteristics which have
gradually evolved during the last 1500 years or more.
This monument lies in the Cotswold Scarp and Vales sub-Province of the Central
Province, a scarp and vale landscape extending south eastwards from the clays
and alluvium of the Severn Plain, over the limestones of the Cotswolds to the
Oxford Clay Vale. Villages and hamlets concentrate thickly in the Severn
Valley and the Vale of Pewsey, but are only moderately dense elsewhere. They
are most thinly scattered on the higher ridge of the north east Cotswolds, an
area where in 1851 there were low populations and frequent deserted villages.
Overall, there are very low concentrations of dispersed farmsteads, the only
exceptions being the Vale of Pewsey and the Upper Avon and Thames watershed.
The Severn Plain local region contrasts markedly with the main limestone scarp
of the Cotswolds. It contains large numbers of villages and hamlets founded in
the Middle Ages; only a small proportion of these have since been depopulated.
Domesday Book indicates that the area was particularly densely populated in
1086, when very little woodland remained there.

The medieval settlement at Billesley Trussell includes well preserved remains
of a variety of settlement features. In addition there are a series of
important documentary sources, ranging from the Anglo-Saxon to the post-
medieval periods. Relatively few settlements have detailed Anglo-Saxon
documentation providing information about the earliest phases of their
development. Whilst the survival of information about the medieval village
and particularly about the cause and conditions of the abandonment of the
medieval settlement at Billesley Trussell provide an important opportunity to
understand the development of the settlement over time.
The earthworks and buried remains will preserve domestic dwellings and their
ancillary and agricultural buildings, which will provide information
about the relative wealth and activities of the members of the community,
changing building techniques, as well as the technological development of
agriculture and patterns of subsistence. Artefactual evidence will preserve
information on the social history of the site, including evidence about
its occupants and their daily activities, as well as insights into the range
of social activities and trading contacts of the inhabitants of the settlement
throughout its history.
The church and churchyard at Billesley Trussell, which have been closed to
burial for many years, will preserve the skeletal remains of the inhabitants
of the medieval settlement. These will provide information about the dietary
conditions, age and health of the rural population, and will allow statistical
analysis of the changing population of medieval Billesley Trussell. In
addition the survival of burial goods and artefacts such as coffin fittings
will provide information about funerary practices in the settlement throughout
the medieval and post-medieval period.