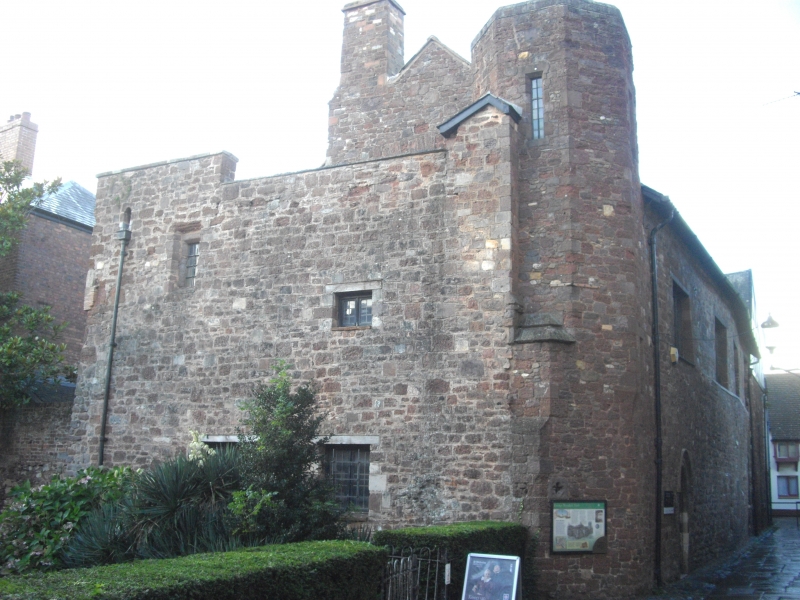 The monument includes part of St Nicholas' Priory, a Benedictine monastery
founded in the late 11th century and dissolved in 1536. It is situated
within the centre of the city of Exeter, in the west quarter of the area
enclosed by the medieval walls. The monument includes the buried remains
of part of the claustral buildings of the priory and the area of the
cloister. The priory conformed to the traditional monastic plan in which
a church and three ranges of two storey buildings were grouped around the
central open square court of the cloister, the church in this case forming
the south side of the cloister. The standing remains of the claustral
buildings consist of two adapted structures incorporating parts of the
west and north ranges, now separated by a public footpath known as The
Mint. These structures have been in continuous occupation for about 900
years and retain evidence for the conversion of the medieval buildings
into a post-Dissolution house which was subsequently subdivided into
smaller dwellings. The walls are mostly of random rubble construction
utilising local Heavitree stone with dressed stonework of volcanic trap
and some Beer stone. Carved stonework in Purbeck marble has been recovered
from the site.
The west range, which is Listed Grade I, survives as a substantial two
storeyed building approximately 31m by 13m, with a slate roof, abutted on its
north end by a later building with a three storeyed tower to the west. The
standing remains of the north range are incorporated into No 21 The Mint, a
substantial detached building of two storeys, which is Listed Grade II*. The
north range of the priory would have originally extended farther to the east
of this building and traditionally would have contained the refectory (dining
hall) of the priory.
To the south of the west range are the buried foundations of the west end of
the priory church which were revealed by archaeological excavation in 1971.
Further excavation in 1983 identified four structural phases of the west front
of the church, culminating in the 14th century with the construction of the
massive foundations of an apparently rectangular structure, interpreted as a
church tower. In 1992/3 a trench excavated in The Mint along the east face of
the west range revealed the foundations of the walls of the north range where
they met with the west range, and on the south side of the cloister, wall
foundations associated with the north side of the priory church. Documentary
sources indicate that the church was badly damaged by fire in 1111 and again
in 1161. In 1321 it is recorded that the church tower collapsed and was
subsequently rebuilt.
The priory was founded on land belonging to St Olave's church which had been
sequestrated by William the Conqueror (1066-87) following the siege of 1068.
The land and church were granted to the Benedictine Order in 1070 and were
colonised in the last quarter of the 11th century by monks from Battle Abbey
in Sussex. King John (1199-1216) granted the priory a manor and a fair on
St Nicholas' day. The priory was part of St Nicholas Fee which was an enclave
of independent legal and financial authority within the city, and the cause of
a number of documented disputes between the priory, the city and the
cathedral. The priory performed an important charitable function within the
Fee, distributing food and alms to the poor, and also held rights to a part of
the city's piped water supply.
The priory was dissolved in 1536 and was in crown ownership until 1540 during
which time building stone was taken to repair the city wall and Exe bridge. In
1562 the buildings were sold to Robert Mallett and remained in his family for
about two centuries. In the Elizabethan period the west and north ranges were
converted into a substantial town house, but by 1655 it appears that the west
range had been converted into tenements. The buildings subsequently underwent
a series of adaptations and divisions under a succession of owners and
tenants. In 1788 the north range came into the ownership of the Roman
Catholics, and in 1863 was separated from the west range. In 1913 the west
range, which had been divided into four dwellings, was purchased by the City
and subsequently restored for use as a museum.
A number of features are excluded from the scheduling: these are the standing
structure of the west range, the standing structure of No 21 The Mint which
incorporates the standing remains of part of the north range, all made up
footpaths and pavements, all post-medieval garden walls, and all street
furniture; the ground beneath all these features is, however, included.

St Nicholas' Priory played a significant part in the history and development
of the medieval city of Exeter. The standing remains of the priory are among
the oldest surviving medieval buildings in the city. The west range, which is
excluded from the scheduling, demonstrates a high state of preservation in
which most of the layout of the monastic building remains visible or can be
reconstructed, and contains a fine vaulted Norman cellar. It also includes
features relating to its conversion to a post-Dissolution residence. The
direct association of the priory with William I and succeeding Norman kings
serves to emphasise the regional importance of Exeter in that period and to
locate the early history of the priory and city in a national context.