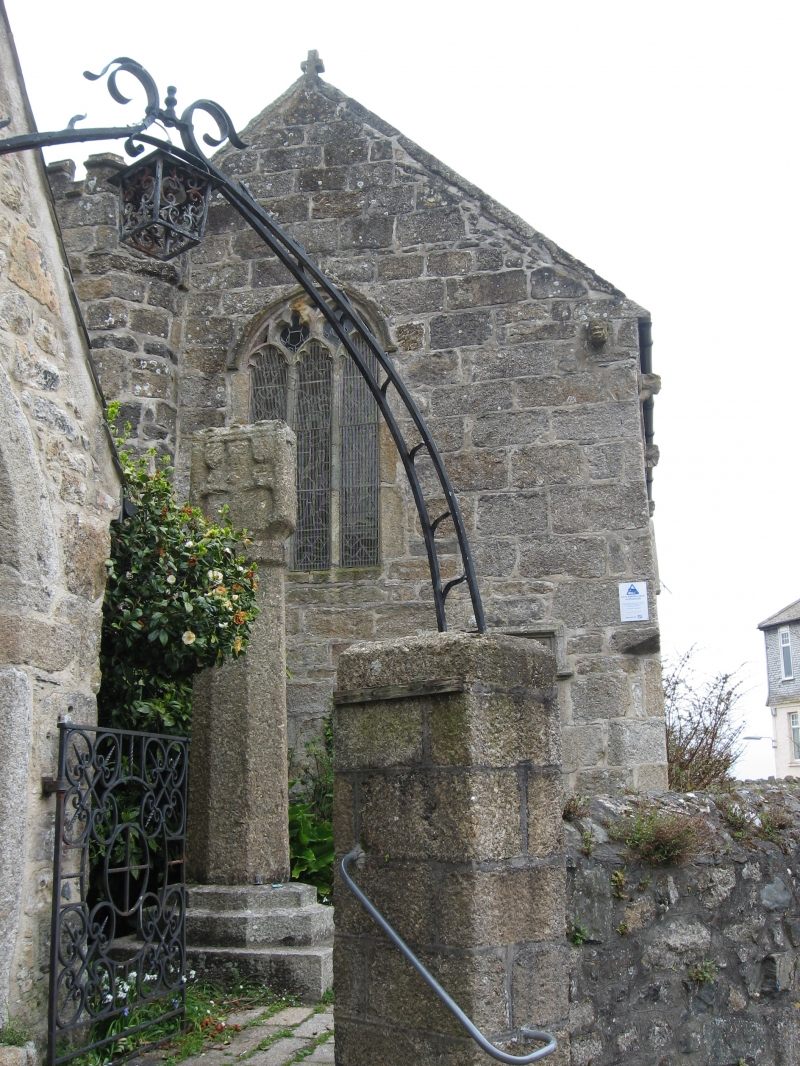 The monument includes a medieval churchyard cross situated in the
churchyard of St Ia's church in St Ives on the Penwith peninsula in the far
west of Cornwall.
The churchyard cross is visible as an upright flattened octagonal granite
shaft with a rectangular lantern head mounted on a three stepped modern
granite base. The monument measures approximately 3m in overall height. The
principal faces are orientated east-west. All four faces of the head are
decorated with scenes in relief. The west principal face bears a crucifixion
scene with the head of God the Father above the cross. There is a small
shield on either side of the head of God. The east principal face is decorated
with the Virgin and Child, flanked by a figure to either side, possibly
representing angels. Again, two shields flank the Virgin's head. The south
face bears a figure of a bishop, probably St Uny, and the north face bears the
figure of St Ia. The top of the head is decorated with `battlements', and the
corners of the head are beaded, forming `turrets' at the top. The octagonal
section shaft widens at the top to form a collar just below the head.
The shaft is mounted in a three stepped base. The top two steps are octagonal
in shape; the bottom step is rectangular and measures 1.48m north-south by
1.16m east-west. In 1869 the historian Langdon recorded that this cross was
found buried in the churchyard in 1832. It is considered that this cross is
probably the original churchyard cross that was thrown down and buried at the
Reformation, and is possibly contemporary with the church which was completed
in 1434. The cross was re-erected in 1852.
The drains to the north east and north west, the architectual fragements and
floor tiles, the granite paved footpath to the south, and the iron boot
scraper to the east of the cross are excluded from the scheduling, although
the ground beneath all these features is included.