Wayside cross in Madron churchyard, west of the church 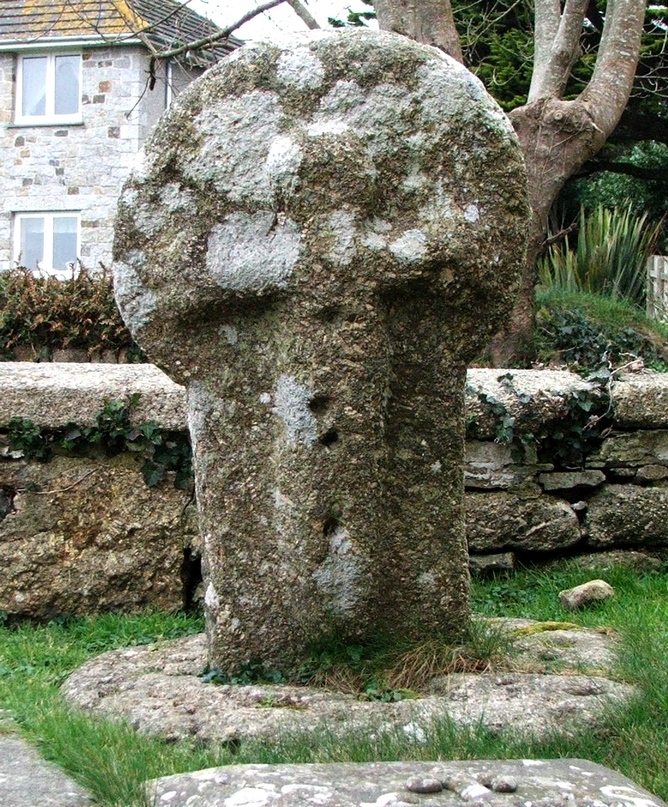 The monument includes a medieval wayside cross situated to the west of the
church at Madron on the Penwith peninsula in west Cornwall.
The wayside cross, which is listed Grade II, is visible as an upright granite
shaft with a round or `wheel' head, mounted on a circular granite base. The
monument measures 0.97m in overall height. The head measures 0.62m wide by
0.24m thick. The principal faces are orientated east-west and are decorated.
The east principal face bears a large figure of Christ, 0.84m high, with
outstretched arms, the legs and lower part of the body extending down the
shaft. The ends of the arms are expanded, showing the sleeves of the tunic,
and the feet are missing. There are four shallow holes or drillings on the
figure of Christ motif. The west principal face bears a relief equal limbed
cross with slightly expanded ends to the limbs; two incised lines continue the
lower limb down the length of the shaft. There is a narrow bead around the
outer edge of the head on this face. There is a 0.04m diameter hole, 0.07m
deep in the shaft, just below the head, probably the result of an earlier
reuse of the cross as a gatepost. There is a similar hole in the south side of
the top of the head. The shaft is mounted in a circular base, 0.95m in
diameter, which is set flush with the ground. This base consists of two pieces
of granite with many shallow holes being sunk into it, the result of its
previous use as a practise stone for young men to practice drilling holes in
granite prior to starting work in the quarries. The four holes on the figure
of Christ are also a result of this reuse of the cross.
This wayside cross was recorded by the antiquarian Blight in the mid-1850s as
being built into a hedge near the east entrance to the churchyard at Madron.
By 1896, when the historian Langdon illustrated the cross, it had been mounted
in a base and relocated at the west end of the churchyard in its present
position.
The electricity cable to the west of the cross, the headstones to the north,
north east, and east, and the granite and brick structure to the south, are
excluded from the scheduling, although the ground beneath, these features is
included.

This wayside cross has survived well as a good example of a `wheel' headed
cross with a rare figure of Christ motif on one face. Its reuse as a gatepost
and relocation in the churchyard at Madron illustrates well the changing
attitudes to religion and their impact on the local landscape since the
medieval period.