A Scheduled Monument in Avebury, Wiltshire 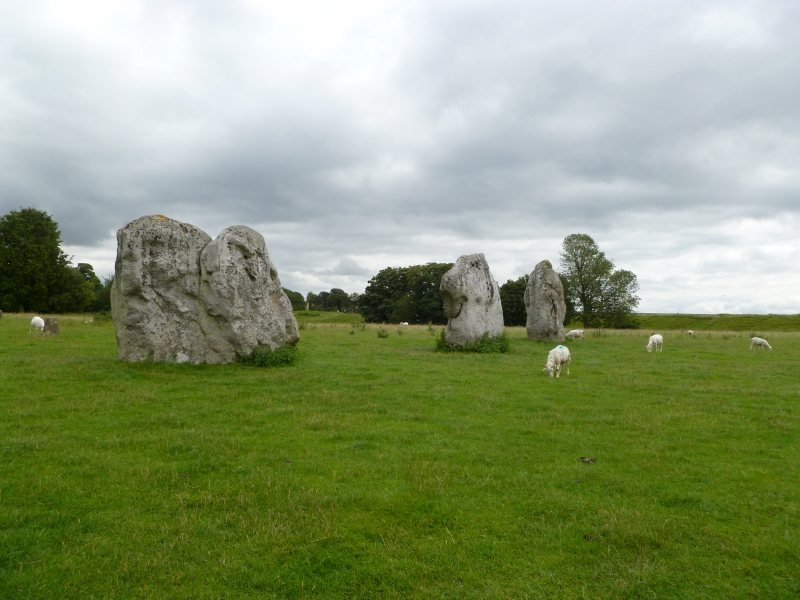 The monument includes the henge at Avebury as defined by its earthen bank and
internal ditch containing a large stone circle within the henge, two smaller
stone circles within the enclosure, the stone setting known as The Cove, a
series of medieval and later field and property boundaries and a section of
ancient trackway which at one time formed the London to Bath road. Avebury is
situated in the north-south aligned valley of the River Kennet, lying just to
the east of the river. The monument forms part of a World Heritage Site, which
has a concentration of major funerary and ceremonial prehistoric monuments.
These include many monuments which are among the best known examples of their
type, such as the Silbury Hill monumental mound, the Windmill Hill causewayed
enclosure, West Kennet long barrow and the Sanctuary. A narrow portion of the
bank and ditch on the henge's west side lies within a churchyard in active
use. This area is not included in the scheduling. The monument abuts another
scheduling containing the associated Avenue, immediately south of the
Beckhampton Road, which is the subject of a separate scheduling.
Avebury henge is one of the largest known examples of its class and the stone
circle which runs around its interior is the largest stone circle in Britain.
The henge enclosure consists of a roughly circular ditch and outer bank
enclosing an area of roughly 11.5ha. The ditch measures 23m wide at its top
and originally had a flat bottom 10m wide and between 7m and 10m below the
ground level, cut into the natural chalk. There were four causewayed entrances
into the interior, all roughly aligned with the cardinal compass points. The
outer bank, which was built with the material excavated from the ditch,
measured between 22m and 30m wide at its base and stands up to 5m high.
Within the enclosure stood a stone circle of some 100 stones, built c.2500 BC.
Inside this massive circle stood two further stone circles. The northern
circle contained 27 stones and had an inner horseshoe of stones known as The
Cove. These inner stones stand up to 4.8m high.
The southern circle of 29 stones included a 6.4m high central stone known in
recent times as the `Obelisk'. These stones all come from the sarsen `fields'
within 3km of the site, mostly on the Downs to the east.
The ancient trackway running east-west through the henge, which later became
the route of a medieval road, runs up onto the Fyfield Downs and it is likely
that many of the stones for the monument would have been dragged along it, a
mostly downhill route from the Ridgeway.
Later activity on the site included occupation from the Saxon period up to the
present time, with evidence surviving for the medieval village in the form of
some of the existing land divisions and buildings. The medieval village,
including the manor, extends beyond the monument and parts of it are the
subject of separate schedulings.
The monument remained little affected by these later activities until the
1700s, when a concerted effort was made to remove the stones by breaking them.
Excavation has shown that earlier attempts to remove stones were also made
and one such action resulted in the death of a Barber Surgeon in c.1300 AD.
Excluded from the scheduling are all road and paving surfaces, boundary fences
and walls, standing buildings, sign posts, septic tanks and other modern
features, although the ground beneath all these features is included.

A small number of areas in southern England appear to have acted as foci for
ceremonial and ritual activity during the Neolithic and Early Bronze Age
periods. Two of the best known and earliest recognised, with references in the
17th century, are around Avebury and Stonehenge, now jointly designated as a
World Heritage Site. In the Avebury area, the henge monument itself, the West
Kennet Avenue, the Sanctuary, West Kennet long barrow, Windmill Hill
causewayed enclosure and the enigmatic Silbury Hill are well-known. Whilst the
other Neolithic long barrows, the many Bronze Age round barrows and other
associated sites are less well-known, together they define one of the richest
and most varied areas of Neolithic and Bronze Age ceremonial and ritual
monuments in the country.

Henge enclosures are settlements and ceremonial centres which date to the late
Neolithic period (2400-2000 BC). They were constructed as large, roughly
circular or oval shaped enclosures, usually over 300m across, comprising an
area of ground more or less completely enclosed by a ditch and external bank.
Either two or four fairly wide entranceways through the earthwork provided
access to the interior of the monument which may have contained a variety of
features including round houses, timber circles, fences and burials. Less than
ten henge enclosures have been firmly identified, all in Wiltshire and Dorset.
They are distinguished from the more common, but still rare, henges by their
size and by the evidence of higher levels of activity within their interiors.
The identified henge enclosures are in low-lying situations, on gentle hill
slopes beside or overlooking water courses. They occur only as isolated
examples yet typically contain or lie adjacent to one or more standard henges.
The spacing between the henge enclosures is so regular as to suggest that each
may have formed the focus of a particular tract of land or territory. As one
of the few types of identified Neolithic structure and in view of their
considerable rarity, all henge enclosures are considered to be of national
importance.
The Avebury henge enclosure is a particularly large and well preserved example
of its class. It is world famous and forms the core of one half of the
Stonehenge and Avebury World Heritage Site. Later human occupation leading
to the establishment of a village in part of the enclosure contributes to our
understanding of changing attitudes towards such ceremonial sites over time.
The monument is known from partial excavations and non-intrusive survey to
contain archaeological and environmental evidence relating to its
construction, function, changing use over time and the landscape on which it
was built.