The Three Kings four poster stone circle and round cairn

A Scheduled Monument in Rochester, Northumberland 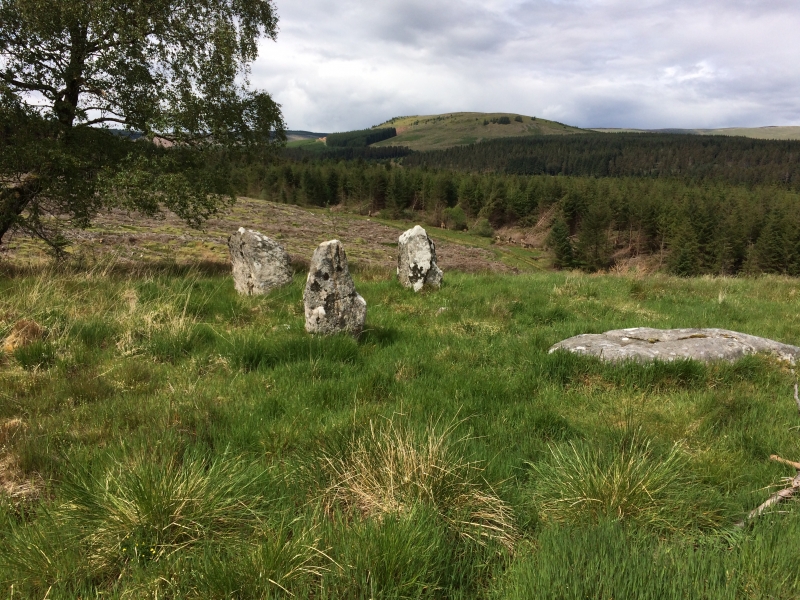 The monument includes the remains of a four poster stone circle situated at
the eastern end of a broad terrace overlooking the River Rede and commanding
views to the east, south and north. The stone setting is formed of four
irregular blocks of sandstone on average 1.4m high and on average 0.9m wide
set on the edge of a circle 4.2m in diameter. It is thought that the stones
were quarried locally as several sandstone outcrops lie in the immediate
vicinity of the monument. Prior to 1971 three of the stones were standing
while the fourth stone at the south east corner of the monument was recumbant;
there was no discernable difference in the heights of the three standing
stones. Part excavation in 1971 revealed the existence of the fourth stone
hole, indicating that this stone was originally upstanding. The remains of a
Bronze Age round cairn were uncovered within the interior of the stone
setting. At the centre of the cairn there was stone lined elliptical space
used for the deposition of cremated bones in an urn. Flecks of charcoal within
the central space and a flint tool beneath the cairn were uncovered. It is
believed that the cairn predated the construction of the stone circle. The
landscape setting of this monument is of great importance as, although it was
situated in order to command extensive views, its position means that it is
not easily visible from the valley below.

Stone circles are prehistoric monuments comprising one or more circles of
upright or recumbent stones. The circle of stones may be surrounded by
earthwork features such as enclosing banks and ditches. Single upright stones
may be found within the circle or outside it and avenues of stones radiating
out from the circle occur at some sites. Burial cairns may also be found close
to and on occasion within the circle. Stone circles are found throughout
England although they are concentrated in western areas, with particular
clusters in upland areas such as Bodmin and Dartmoor in the south-west and the
Lake District and the rest of Cumbria in the north-west. This distribution may
be more a reflection of present survival rather than an original pattern.
Where excavated they have been found to date from the Late Neolithic to the
Middle Bronze Age (c.2400-1000 BC). It is clear that they were designed and
laid out carefully, frequently exhibiting very regularly spaced stones, the
heights of which also appear to have been of some importance. We do not fully
understand the uses for which these monuments were originally constructed but
it is clear that they had considerable ritual importance for the societies
that used them. In many instances excavation has indicated that they provided
a focus for burials and the rituals that accompanied interment of the dead.
Some circles appear to have had a calendrical function, helping mark the
passage of time and seasons, this being indicated by the careful alignment of
stones to mark important solar or lunar events such as sunrise or sunset at
midsummer or midwinter. At other sites the spacing of individual circles
throughout the landscape has led to a suggestion that each one provided some
form of tribal gathering point for a specific social group. A four-poster
stone circle is a rectangular or sub-rectangular setting of four or five
stones, which are, or were once, upright. The corner stones of the rectangle
usually lie on the perimeter of a circle. They are confined to high ground,
clustered on Exmoor, the North Yorkshire Moors, Northumberland, Cumbria and
West Yorkshire with outliers in Shropshire and Derbyshire. Of the 250 or so
stone circles identified in England only 22 are examples of four-posters. As a
rare monument type which provides an important insight into prehistoric ritual
activity all surviving examples are worthy of preservation.

Despite the fact that the The Three Kings four poster stone circle has
undergone part excavation, significant archaeological deposits survive at
The monument, especially in and immediately around the sockets of the three
upright stones which remained in position throughout the excavation. Taken
with other known ritual and funerary monuments of a similar date in the
vicinity, this monument and the importance of its setting in the landscape
will add considerably to our understanding of Bronze Age ritual and society.