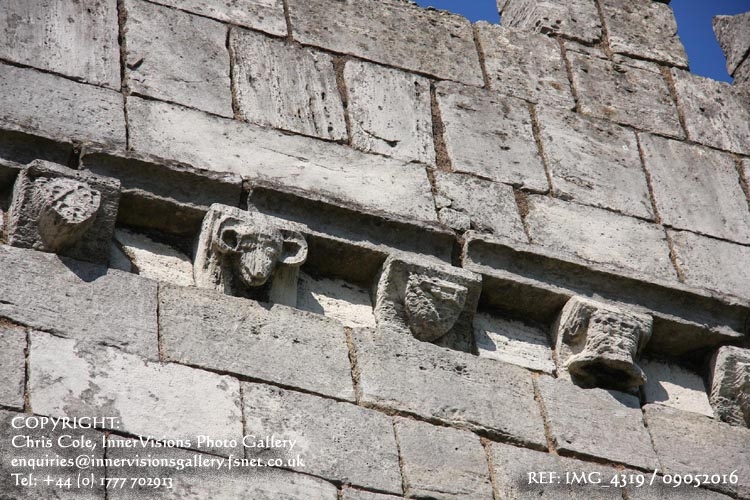 The monument includes the site of the magnate's residence and manorial centre
of Steeton Hall and the upstanding medieval gatehouse. Included in the
scheduling are earthwork remains of the precinct wall, which surrounded the
manorial complex and further earthwork remains of structures and garden
terraces, both within the precinct and immediately adjacent to it. Upstanding
garden and field walls within the precinct area are also included. The
monument lies on the southern side of shallow valley with the hall and
gatehouse lying on level ground and the precinct extending into the
surrounding fields. Part of the medieval Steeton Hall still stands, but has
been added to and altered, particularly in the 17th and 19th centuries. It is
Listed Grade I and is not included in the scheduling, although the ground
beneath it is included.

Steeton Hall stood at the centre of a complex of domestic and agricultural
structures lying within a large enclosure known as a precinct which was
defined by a wall. A gatehouse providing access into the precinct still stands
and is Listed Grade I and is also in the guardianship of the Secretary of
State. Within the precinct was a smaller inner enclosure which contained the
hall itself and the immediate domestic buildings such as staff lodgings and
kitchens. In the outer precinct a range of structures associated with the
wider agricultural and economic functions of the manorial centre such as
stables, workshops, stores and barns would have been located.

In the north western section of the precinct are a series of stone revetted
terraces orientated north to south which are interpreted as remains of garden
terraces. These would have included formal and informal flower beds and may
have housed plinths for statues and structures such as stands and
summerhouses.

The precinct wall survives as a low bank extending eastward from the gatehouse
for 100m, turning south for 110m then westward for 270m then northwards
towards the stream. In some places stone footings for the wall are visible
along the bank and in one place east of the gatehouse 3 courses of stonework
survive above ground level. At the northern end of the precinct the stream
occupies a deep moat-like cutting, interpreted as an artificially enhanced
natural stream bed. This served as a precinct boundary along this side.

Further building platforms survive as slight earthwork features to the north
east of the gatehouse. Within the north eastern corner of the monument an
earthern bank crosses the line of the stream forming a small, now dry,
fishpond. The stream has been channeled by stone revetting and a stone
abutment on the edge of it are the remains of a sluice for controlling water
flow. Within the south eastern section of the precinct are earthwork remains
of building platforms.

A low wall to the north east of Steeton Cottage has a series of 17th century
arched bee boles built into it. These were alcoves to protect bee hives from
the weather. This wall, along with others on the site of the 17th century or
earlier date, are included in the scheduling.

The gatehouse still stands complete. It dates to c1360 and is a two storey
rectangular structure with a central archway and a small side passage. There
are two chambers on the first floor, the larger of which is reached by a
spiral staircase and the smaller by an external stair on the south east side.
The top of the gatehouse is crenellated and decorated with gargoyles and coats
of arms and crests carved onto stone shields.

Steeton Hall is a complex building the core of which dates to the 14th
century. The 14th century building is thought to have been much larger than
the fragment surviving today and buried remains indicating the full extent and
nature of this medieval building will survive beneath and adjacent to the
later additions. The latter are 17th century and later in date. The range of
stone farm buildings north of the hall were constructed in the late 17th
century and may have been built on the footings of earlier structures. They
are Listed Grade II and are not included in the scheduling. The core of
Steeton Cottage is also thought to date to the 17th century and was altered in
the 19th.

Steeton manorial centre was one of the manors of the barony of Sherburn and
was purchased by the Reygate family in 1261. The hall and the gatehouse were
built in the 14th century probably by William de Reygate who was Escheator to
the king for the county of York and it was during this time that the manorial
centre flourished. The site was then neglected for many years until 1642 when
it was occupied by the Foljambe family. The site was substantially re-modelled
in the 17th century when the hall was added to, the farm buildings and bee
bole wall were constructed and the gardens rebuilt. Much of this activity
reused the existing earlier features.

The gatehouse and adjoining walls and Steeton Hall are Listed Grade I and the
barn, granary and cartshed north east of the hall are Listed Grade II.
Steeton Hall, the farm buildings, the modern barns, garages, Steeton Cottage,
fences, surfaces of paths, tracks and yards and the bridge are all excluded
from the scheduling, although the ground beneath these features is included.

In common with other medieval complexes, magnates' residences would also
have a range of formal and ornate gardens by or near the house often falling
within the curtain wall. Gardens were both functional and decorative. There
would be a kitchen garden for producing food and a herb garden which had a
medicinal as well as a culinary use. In the formal and decorative garden there
may be terraces and walled enclosures which contained raised beds and
pedestals for plant holders and statues, linked by pathways and, in larger
gardens, rides. Within the pleasure gardens of the wealthy a wide range of
ornamental but functional buildings would exist depending on the size and
style of the garden. In early gardens these seem to have been limited to
galleries and elaborate entrances but by the 16th century the buildings
included, pavilions, summerhouses, stands, grottoes, belvederes, grandstands,
kennels, gazebos, banqeting houses and prospect mounds. Gardens at high status
secular buildings were positioned so they were overlooked by private chambers
and rooms of relaxation within the building and in some cases it seems that
the house and garden would be designed and planned in tandem. As with the
architecture of their houses, gardens of the wealthy were created for prestige
and as status symbols.

High status medieval centres worked as agricultural units for domestic
consumption. A common element of which was the fishpond. These were
artificially created pools of slow moving freshwater constructed to cultivate,
breed and store fish. Fishponds were maintained by a water management system
which regulated water supply by sluices and leats.

The remaining structures and earthworks at Steeton Hall survive well and
significant buried archaeological remains will be preserved throughout the
monument. The gatehouse survives particularly well and important information
about the architectural details are preserved within the fabric. The fishpond
as well as the earthworks in the outer precinct offers important information
about the wider economic functions of the monument and the development of a
high status domestic complex in the medieval and post-medieval periods.