Lord Dacre's Cross or Towton Cross on the west side of the B1217, 1km south west of Towton

A Scheduled Monument in Saxton with Scarthingwell, North Yorkshire 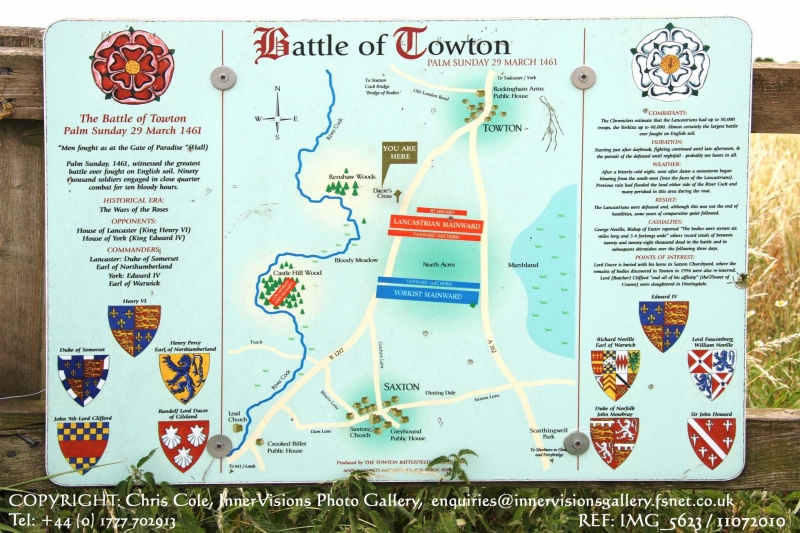 Entry Name: Lord Dacre's Cross or Towton Cross on the west side of the B1217, 1km south west of Towton

The monument includes a high cross erected beside the B1217 road from Towton
village to Garforth. The cross was erected on this site to commemorate the
Battle of Towton, a decisive engagement during the Wars of the Roses. The
battle was fought in 1461 and this gives a date for its erection.
The cross consists of a cross-head, a medieval stone base and a modern shaft.
The base is set in a modern concrete plinth and a plaque is affixed to the
plinth on the north side reading "Battle of Towton 1461".
The base is of yellow fine-grained York stone. It stands 0.4m high and
measures 0.69m by 0.69m at the bottom and tapers to 0.53m by 0.53m at the top
edge. The shoulders of the base are chamfered for 0.16m. The shaft, a modern
addition, is cut from the same stone standing 1.7m from the base to the
projecting shoulder of the wheelheaded cross. It measures 0.35m by 0.28m at
the base and tapers to 0.25m by 0.21m at the head. The head is 0.62m high and
is in the form of a Maltese cross set in a wheelhead, with the arms of the
cross projecting 0.08m from the edge of the wheel. There is also a projecting
shoulder below the head. The top of the cross is fractured away. The base has
an inscription, cut later in the history of the monument, "Battle of Towton
Palm Sunday 1461".
The cross stands 5m to the west of the B1217 road and a droveway runs beside
it heading west. This has a metalled surface.
The shaft was inserted in the base and the cross restored with its concrete
plinth by Mr J R Ogden in 1929. It is also Listed Grade II.
The cross and the plinth are included in the scheduling. The surface of the
adjacent track is excluded from the scheduling, although the ground beneath it
is included.

The Towton cross is an important commemorative cross. It survives well and has
been sensitively restored on its original site. The original carving is
elegant and has a 15th century style which is related to the church buildings
of this period. It serves as a reminder of the piety expected of the medieval
traveller, standing beside a main road. It also gives insight into the late
medieval importance attached to the Battle of Towton.