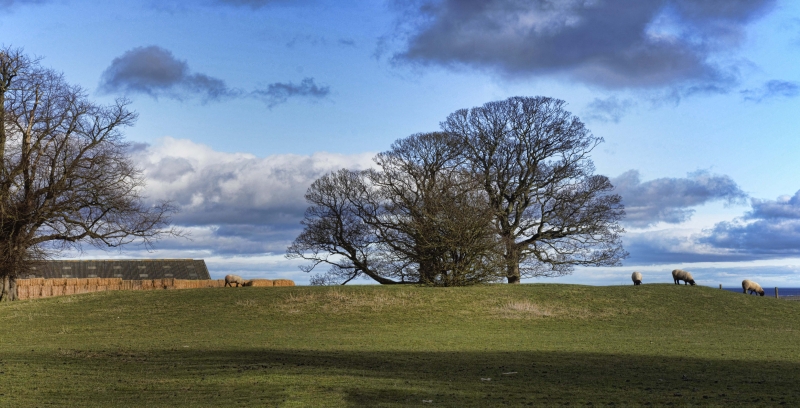 The monument includes the site of a medieval tower house (Widdrington Castle)
with later additions, part of its gardens, and the site of an 18th century
Gothic castle. The site of the medieval building is in the north west corner
of the monument. The site of the 18th century castle lies to the south east
and is visible as a roughly circular mound 2.1m high and 49m in diameter, with
an internal depression up to 1.6m deep and 20m in diameter. This is referred
to as `Castle Mound' on the 1:10000 map. Building foundations are visible in
the side of the turf covered mound and consist of worked stone and 18th
century brick. In 1954 several trenches were excavated to the south of the
mound in an area measuring c.90m by c.73m. Building foundations were
discovered on the south edge of the mound. Other features further south
included the foundations of a garden wall and a carriageway, and possible
remains of garden paths and rubbish dumps.
The medieval tower house is documented in 1341 when licence to crenellate
(i.e. erect a fortification) was granted to Gerard Widdrington. By 1592 the
castle consisted of three parts: the original (south) tower, a great hall to
the north, and beyond that the north tower. Both towers projected eastwards
from the hall leaving a recess containing the principal entrance. Between 1592
and the Civil War (1645-49) the hall was rebuilt and heightened. Between 1653
and 1676 projecting wings were added to the north and south from the two
towers by William, Second Baron Widdrington. He also laid out an enclosed
forecourt and, to the south of this, a walled garden. In 1720 the castle was
bought by York Buildings Company and was described as in a very ruinous
condition and in danger of falling. Some time after 1772 the castle was
demolished by Sir George Warren and then rebuilt, based on a drawing by S and
N Buck made in 1728. This new structure burnt down before it was completed and
was replaced, on a new site to the south east, by a Georgian Gothic castle
designed by Thomas Sewell of Alnwick. Slight indeterminate earthworks are all
that remain visible on the site of the tower house. However, the foundations
of the tower house and its various additions will survive well below ground.
An engraving of the new Gothic building records it as having been built in
1772. It depicts a south facing rectangular building with a central octagonal
tower, the whole situated on a slight mound. This house was uninhabited from
1802, and in 1862 was demolished leaving only the central tower standing. By
1903 the tower had also been removed leaving only the hollow mound which can
be seen today. In the middle of the site is a line of twelve trees orientated
north-south and called the Twelve Apostles. However, it is not clear which
building their layout relates to.
The fence which runs across the southern line of the protected area is
excluded, although the ground beneath is included.

The remains of Widdrington Castle and the 18th century Gothic castle survive
below ground and as visible earthworks and will contain significant
archaeological deposits. The continued use of the site from the 14th to 19th
centuries will provide information on the development and evolution of high
status residences in Northumberland where few comparable houses have been so
completely abandoned. Evidence for the development of the gardens associated
with these residences will also survive.