A Scheduled Monument in Matfen, Northumberland 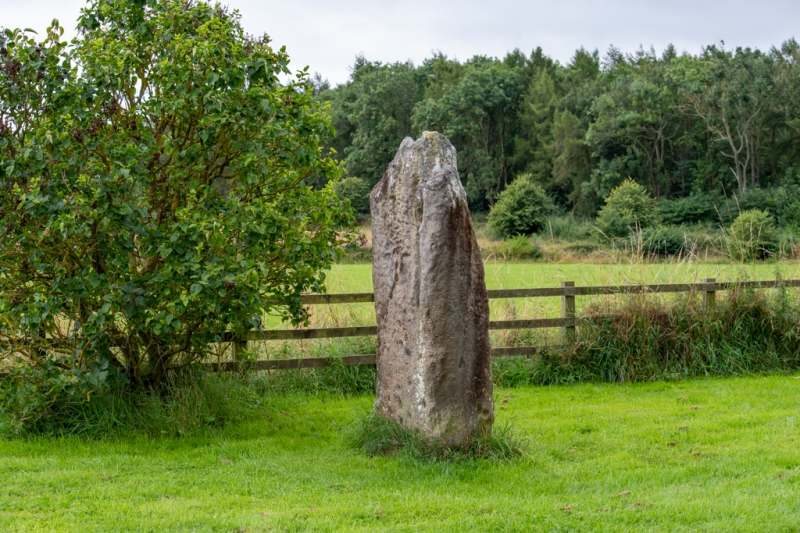 The monument includes the remains of a standing stone of Bronze Age date
situated near the top of a promiment rise. The standing stone is 2m high and
0.5m square at the base and 1m wide at the top. It has been fashioned from a
massive freestone block, the upper parts of which are weathered and deeply
grooved and it leans slightly to the south. The eastern face of the standing
stone displays at least four cup marks or shallow, circular prehistoric motifs
pecked out of the surface of the stone. The standing stone is known locally as
`The Warrior Stone'.

Prehistoric rock art is found in many areas of upland Britain and is
especially common in the north of England. The most common form of decoration
is the `cup and ring marking' where small cup like hollows are pecked onto the
surfaces of rock. These cups may be surrounded by one or more `rings'. Other
shapes and patterns may also occur but are less frequent. Carvings may occur
singly, in small groups or may cover extensive areas of rock surface. They
date to the Neolithic or Bronze Age periods (2800-c.500 BC) and provide some
of our most important insights into prehistoric `art'. The standing stone at
Sandway Heads is well preserved and retains significant archaeological
information including evidence of prehistoric cup marks. It is one of a small
group of three standing stones in the area which, taken together, will add to
our knowledge and understanding of Bronze Age settlement and activity in the
region.

Books and journals
Hope-Dodds, M , The Victoria History of the County of Northumberland: Volume XII, (1940), 13
Other