A Scheduled Monument in Rushton, Northamptonshire 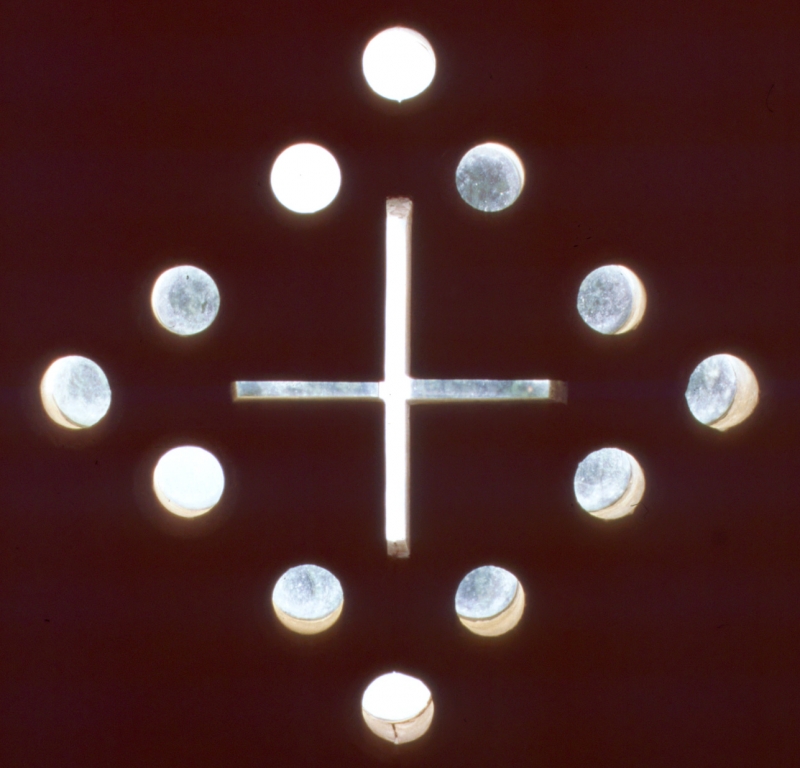 Church of England Parish: Rushton with Glendon All Saints

The monument includes Rushton Triangular Lodge, a warrener's lodge built in
the years 1594-7 by Sir Thomas Tresham. As a recusant, Tresham was repeatedly
fined and imprisoned, and he devised the Triangular Lodge as an architectural
expression of his commitment to Roman Catholicism. The design of the building
is based on the equilateral triangle, symbolic of the Holy Trinity, and its
variant the trefoil, emblematic of the Tresham family; it also incorporates
symbols of the Mass. The monument includes the lodge, a Grade I Listed
Building, and the earthwork and buried remains of parts of the adjacent rabbit
warren of which it formed a component. The monument is in the care of the
Secretary of State.
The monument is located approximately 650m north west of Rushton Hall, former
seat of the Tresham family, and marks the north western corner of the former
Rushton Park. The lodge is a stone built structure of triangular plan. The
three exterior walls are constructed of alternating courses of light and dark
limestone resting on a plinth of roughly dressed blocks; the quoins, window
dressings and other architectural details are picked out in white limestone.
The total perimeter of the building is 100ft, divided into three sides each
33'4" (10.16m) in length; each side is divided into three, both horizontally,
by a string-course and cornice, and vertically, by windows and gables. On each
face are three rows of three windows corresponding to three internal storeys.
Each of the basement windows, just above the plinth, takes the form of a small
triangular light set in a trefoil panel. The windows of the raised ground
floor are much larger and more elaborate: the central light of each is cut in
the shape of a cross, each arm terminating in a trefoil of three circular
openings which run together to describe a square. Each window is set in a
square panel, the corners of which are carved with shields; here, as elsewhere
on the building, the shields are principally those of the Treshams and related
families. The cross in the central window of the south east side has been cut
away to create a larger light adjacent to the entrance to the building, a
rectangular doorway reached from a flight of stone steps; on the lintel is the
number 5555, believed to indicate the date of the building calculated from
Creation. Over the doorway is a shield and the inscription TRES TESTIMONIUM
DANT (`There are three that bear witness'), set in a panel which combines the
trefoil (above) with the triangle (below). This panel cuts into a string-
course which divides the ground floor from the upper storey, and above which
are fixed the iron letters and numbers which represent Tresham's initials
(south west side) and the date the building was devised, 1593 (south east and
north sides). The upper windows are set in square panels, of similar
dimensions to those below; each is occupied by a large trefoil differently cut
with a number of small lights, principally of triangular shape. The upper
corners of the square panels are carved with shields. Above is a classical
cornice, divided into three by rainwater heads in the shape of angels; on the
cornice are three Latin inscriptions of 33 letters each, taken from the Bible,
and below it another of six letters on each side. At roof level are three
crocketed gables with an obelisk of triangular section on each point; within
each gable is an inscription and a square panel, those on the left and right
carved with a religious emblem and that at the centre fixed with a sundial. At
the centre of the roof is a chimney of triangular section, ornamented with
trefoils, inscriptions and emblems symbolic of the Mass.
The interior of the building has three storeys. The principal room on each
floor is hexagonal in shape, beyond alternate sides of which is a small
triangular room or space. On the north eastern corner of the building this
space is occupied by a newel staircase which connects the three storeys; on
the raised ground floor it also includes a small lobby through which the
building is entered from the exterior doorway. At this level each of the three
windowless walls is ornamented with a carved shield with a rectangular panel
on each side; at each of the basement and upper levels similar ornament
appears on two walls. On the upper floor, now open to the roof, is a fireplace
with a cast-iron surround of 19th century date, and at the north western
corner is a small chamber with blind windows. This storey would have provided
living accommodation for the warrener, from which he could oversee the warren.
The basement would have been used for the storage of tools and traps.
The lodge stands within a subtriangular enclosure which includes the remains
of parts of the rabbit warren which occupied this corner of Rushton Park. In
the northern part of the enclosure, running parallel with the adjacent road,
is a linear mound approximately 50m long, 5m wide and 0.75m high, tapering at
each end. This feature is considered to represent a `pillow' mound constructed
to house rabbits. In the south western part of the enclosure is a well. The
remainder of the enclosure is believed to include the buried remains of
outbuildings and other features associated with the use of the warren and
lodge.
The modern building which partly overlies the pillow mound in the northern
part of the monument is excluded from the scheduling although the ground
beneath it is included. Also excluded is the concrete foundation for a modern
building in the south east part of the monument, and all modern railings; the
ground beneath these features is, however, included.

A warren is an area of land set aside for the breeding and management of
rabbits or hares in order to provide a constant supply of fresh meat and
skins. Although the hare is an indigenous species, the tradition of warren
construction and use dates from the 12th century, following the introduction
of rabbits into England from the continent. Warrens usually contain a number
of purpose-built breeding places known as pillow mounds or rabbit buries,
which were intended to centralise the colony and make catching the animals
easier, whether using nets, ferrets or dogs. The mounds vary in design
although rarely exceeding 0.7m in height. Earlier monuments such as burial
mounds, boundary features and mottes were sometimes reused as breeding places.
The mounds are usually surrounded by ditches and contain underlying channels
or are situated on sloping ground to facilitate drainage. The interior of the
mound may also contain nesting places constructed of stone slabs or cut into
the underlying subsoil or bedrock.
A typical warren may contain between one and forty pillow mounds or rabbit
buries and occupy an area up to c.600ha. Many warrens were enclosed by a bank,
hedge or wall intended to contain and protect the stock. Other features
associated with the warren include vermin traps (usually a dead-fall mechanism
within a small tunnel), and more rarely traps for the warren stock (known in
Yorkshire as `types') which could contain the animals unharmed and allow for
selective culling. Larger warrens might include living quarters for the
warrener who kept charge of the site, sometimes surrounded by an enclosed
garden and outbuildings.
Early warrens were mostly associated with the higher levels of society;
however, they gradually spread in popularity so that by the 16th and 17th
centuries they were a common feature on most manors and estates throughout the
country. Warrens continued in use until fairly recent times, finally declining
in the face of 19th and 20th century changes in agricultural practice, and the
onset of myxomatosis. Warrens are found in all parts of England, the earliest
examples lying in the southern part of the country. Approximately 1,000 -
2,000 examples are known nationally with concentrations in upland areas, on
heathland and in coastal zones. The profits from a successfully managed warren
could, however, be considerable and many areas in lowland England were set
aside for warrens at the expense of agricultural land. Although relatively
common, warrens are important for their associations with other classes of
monument, including various forms of settlement, deer parks, field systems and
fishponds. They may also provide evidence of the economy of both secular and
ecclesiastical estates. All well preserved medieval examples are considered
worthy of protection. A sample of well preserved sites of later date will also
merit protection.

The remains of the rabbit warren at Rushton Triangular Lodge include both
earthwork and structural features surviving in good condition. The lodge is
rare not only as a complete survival of a warrener's lodge but also as an
example of an Elizabethan architectural `device'. The unique design of the
building is a manifestation of philosophical and religious ideas at a
particular period, and as such is of both architectural and historical
importance. It is historically well documented and associated with a
prominent individual of whose works it is one of only three complete examples.
Both the warren and the lodge are of further interest as elements of a post-
medieval landscaped park. The site has remained relatively unaffected by
modern activity and has never been excavated, indicating a high potential for
the survival of buried archaeological deposits. Through structural, earthwork
and buried remains the monument will therefore preserve valuable evidence for
the occupation and use of rabbit warrens during the peak period of warren
construction. As a well known monument in the care of the Secretary of State
it also serves as an important educational and recreational resource.