A Scheduled Monument in Geddington, Northamptonshire 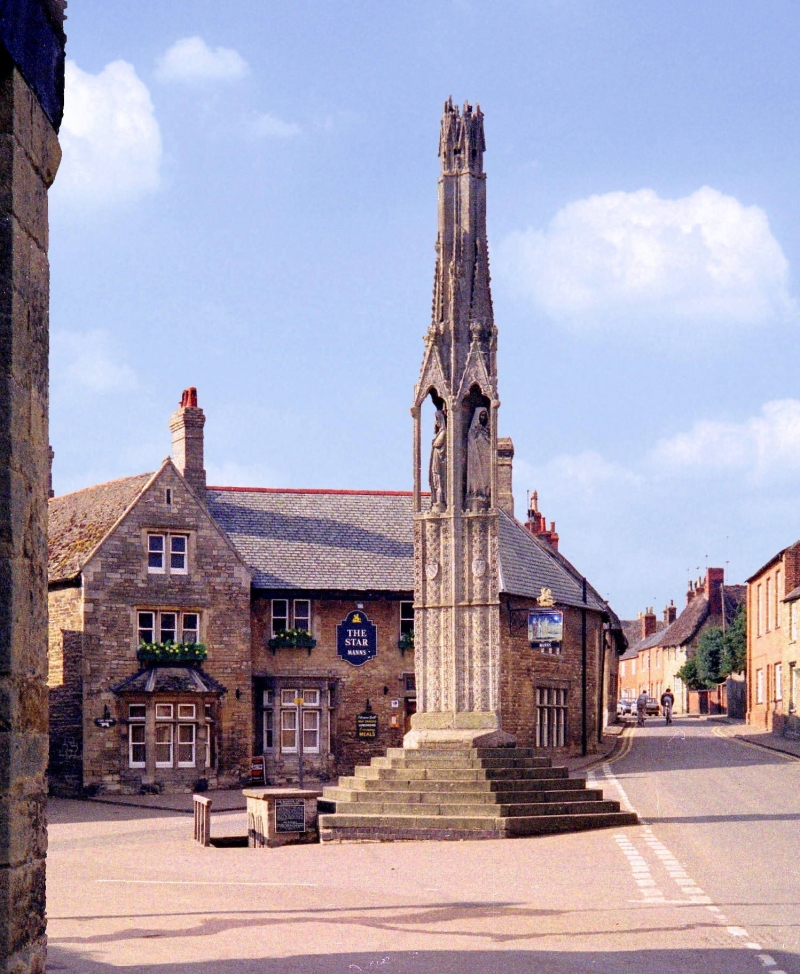 The monument includes Geddington Eleanor Cross, a standing stone cross erected
at the end of the 13th century in memory of Eleanor of Castile, wife of
Edward I. Queen Eleanor died on 28 November 1290 at Harby, Nottinghamshire,
and her funeral procession passed from Lincoln to Westminster in December. The
cross at Geddington marks the resting place of Queen Eleanor's body on the
night of 6-7 December 1290. The monument includes the standing cross, Listed
Grade I, in the care of Secretary of State, together with its foundation
and associated archaeological deposits. It also includes the adjacent
conduit house, built in 1769 and restored in 1868. The steps of the cross
were rebuilt in the 19th century.

The monument is situated over a conduit at the junction of three roads in the
centre of the village of Geddington. The cross, which stands on sloping
ground, is spire-shaped and includes a stepped base, plinth and spire. There
are seven steps of hexagonal plan joined together by mortar and recessed metal
clamps. The lowest step measures about 6m across and stands up to 0.5m above
the sloping ground surface; the lower part of the step is partly faced with
limestone blocks and blue bricks. On the top step rests the plinth, hexagonal
in plan at the base and chamfered above to a top of triangular plan. The
plinth was altered in the 19th century when the original eight steps were
replaced by the present seven; the blue bricks beneath the lowest step were
added during later repairs.

The spire of the cross takes the form of a tall pinnacle of three receding
stages. It is constructed of local limestone, principally Weldon stone with
string courses and weatherings of Stanion stone. The lowest stage is
triangular in plan with undulating sides of wave-moulding, patterned with
rosette diaperwork in low relief. It is divided into two parts by a
string course; in the upper part are six shields, two on each face, carved
with the arms of Castile, Leon, Ponthieu and England. The upper part
terminates in a low battlement. There are vertical engaged shafts at the
angles and at the centre of each face, also decorated with diaperwork, which
carry up to support the gables of the second stage. The second stage is also
triangular in plan, although shorter than the first, and is composed of three
open niches set at the angles of the lower stage. In each niche, facing the
angle shaft, is a statue of Queen Eleanor, complete in each case apart from
the right arm and sceptre. Sheltering the figures are a series of gabled
canopies, two on each side of the cross, ornamented with crockets and foliate
decoration. The third stage of the spire is hexagonal in plan and is shorter
and narrower than the second; it is composed of six tapering pinnacles
surmounted by crocketed gables with foliate ornament. Above the spire formerly
stood the terminal of the cross, now missing. The full surviving height of the
cross is nearly 12.8m.

On the south west side of the cross, immediately abutting the lowest step, is
a small rectangular stone building roofed with a large slab. It is partly
built into the ground and is reached on the south west side by two short
flights of three steps which lead to a small paved recess; on this side of the
building are two round-arched openings, now closed with wooden doors. This
building is a conduit house in which water was collected in cisterns. On the
south west side of the paved recess is a wall containing a small iron grill
through which the water may be seen; the top of the wall is capped with modern
blue bricks and wooden posts. On a shield between the archways of the
building is an inscription recording its construction in 1769 and restoration
in 1868.

The modern road surface and the floodlights around the cross are excluded from
the scheduling although the ground beneath these features is included.

Of the 12 Eleanor crosses erected at the end of the 13th century only three
still stand. Geddington Cross is the best preserved of these, and in its
architectural and sculptural detail is a rare and well documented example
of late 13th century stone carving of the highest quality. It is also unusual
in its incorporation of a public water supply within a royal memorial. The
durability of the materials used has necessitated minimal restoration work in
the modern period, and recent careful conservation of the stonework has
resulted in the preservation of sculptural detail and in the identification of
the surviving remains of original paint. The monument has been the subject of
art-historical research and is thus quite well understood; as a monument in
the care of the Secretary of State it also serves an important educational
function.