A Scheduled Monument in Byland with Wass, North Yorkshire 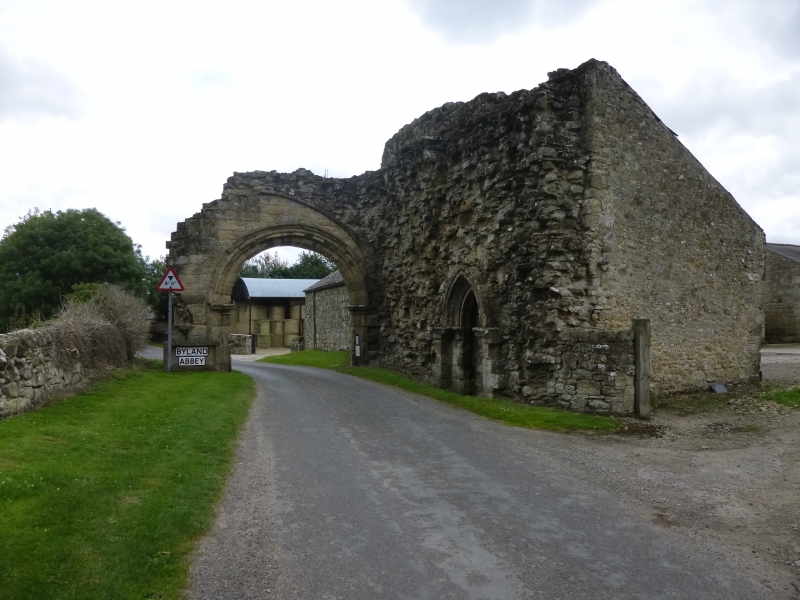 Byland Abbey is situated in Ryedale near the village of Wass. The monument
comprises four separate areas. Between them these contain the standing
remains and inner precinct of the Cistercian monastery of St Mary and a
variety of associated features including fishponds and other water-management
earthworks, quarries, the sites of ancillary buildings, and the remains of
monastic enclosures. Archaeological features relating to the abbey also
survive outside the protected area but are not included in the scheduling,
being insufficiently understood.
The extensive standing remains demonstrate the typical layout of a Cistercian
monastery. The earliest are those of the lay-brothers' quarters, which formed
the west range of the cloister. These date to the foundation of the abbey in
1177 and include a reredorter (latrine) and drain as well as the ruins of a
vaulted undercroft and the 'lane' giving the lay-brothers access to the abbey
church. The church formed the north range of the cloister and is of late
Cistercian type, with square end and ambulatory, built in early Gothic style,
with round-arched windows but pointed vaults. Except for parts of the nave,
which include the west-front and the remains of its early 13th century wheel
window, the church is late twelfth century. A special feature at Byland is a
number of large areas of medieval tiled floor, surviving throughout the
church.
Most building at the abbey appears to have been completed by c.1200 and the
only subsequent work was in minor alterations and additions, including that of
a meat kitchen in the 15th century. This was built onto the existing south
range which consisted of the kitchens, warming-house and frater or refectory.
In the east range were the sacristy, chapter house and parlour, and also the
abbot's lodging, monks' dorter (dormitory) and reredorter, served by another
drain. Behind the east range lay the monks' cemetery whilst an infirmary lay
to the south. Also standing, 150m to the north-west, is the abbey gatehouse.
The remains of this consist of a twelfth century arch which spans the Byland-
Oldstead road, a pier on the grass verge north of the road, the remains of a
pedestrian archway and an area of collapsed masonry in the field to the north
which, although overgrown, is believed to be the site of a room of the
gatehouse. On the south side of the road, a wall runs westward for c.9m from
the main archway and contains a small, well-preserved doorway, now blocked.
This wall is believed to have been the north wall of a porter's lodge, and,
along with the east wall, which is now incorporated into a modern farm-
building, survives to a height of 6m.
In addition to its standing remains, Byland also possesses a wide range of
other features surviving in the modern fields round about. These include
parts of the precinct boundary, visible to west and south as a bank containing
occasional evidence of walling, and field earthworks, including the enclosure
banks of medieval closes. Also surviving are a number of quarries, including
several small pits to the north-west, which are believed to have provided the
stone for lining the monastic drains and ponds, and a larger quarry to the
east which, due to its position on the same slope as the abbey, without easy
access to Wass but with the remains of a paved track leading in the direction
of the abbey, is likely to have been the source of its building stone.
Numerous platforms throughout the adjacent area indicate the sites of
ancillary buildings such as barns and woolhouses, the site of a kiln or
furnace to the south and the probable location of a water-mill or fulling-mill
in the vicinity of Low Pasture House. Further earthworks have been
interpreted as causeways and hollow ways, both serving the abbey and skirting
it along its eastern boundary. In addition, extensive earthwork remains of
former water-management systems have been identified around the abbey. These
include stone-lined conduits or water channels to the north and north-east,
dams (pond-bays) constructed of stone and earth to the west and north-west, a
complex of fishponds to the north and earthworks relating to the mill noted
above, located to the south.
Byland Abbey was founded in 1177 by the formerly Savignac monks of Old Byland,
who had moved to Stocking in 1147 and become Cistercian before moving again to
their final location near Wass. The monastery had an uneventful history and
was dissolved in 1539 when its lands were granted to Sir William Pickering.
Nothing is known of its post-Dissolution history and it seems to have fallen
into ruin gradually, with much of its stone going into the fabric of local
farm-buildings and field-barns. The standing remains and inner precinct have
been in State care since 1921 and are also a Grade I Listed Building. The
Abbey gatehouse is a Grade II Listed Building.
Several features within the protected areas are excluded from this scheduling.
These are the exhibition building and ticket hut, all modern fencing and
walling, all English Heritage fixtures such as notices and rails, all modern
buildings excepting those containing original medieval fabric, and the
surfaces of paths, carparks and drives. The ground underneath these features
is, however, included.

Byland Abbey was one of Yorkshire's largest Cistercian communities. The plan
of the abbey is exceptionally complete and is unusual in dating largely to the
twelfth century. At this time the abbey was built anew on a freshly cleared
site and displays an ornate, Early Gothic style far removed from the austere
forms originally favoured by the Cistercian Order. The flamboyance of its
architecture may be accounted for in part by the Savignac origins of the site,
as this Order was less severe than that of the Cistercians. The survival of
extensive earthwork evidence of the monumental water-management system
engineered to serve the abbey is also a rare and important survival and allows
the location of industrial buildings such as mills to be determined as well as
an increased understanding of the layout of the abbey.