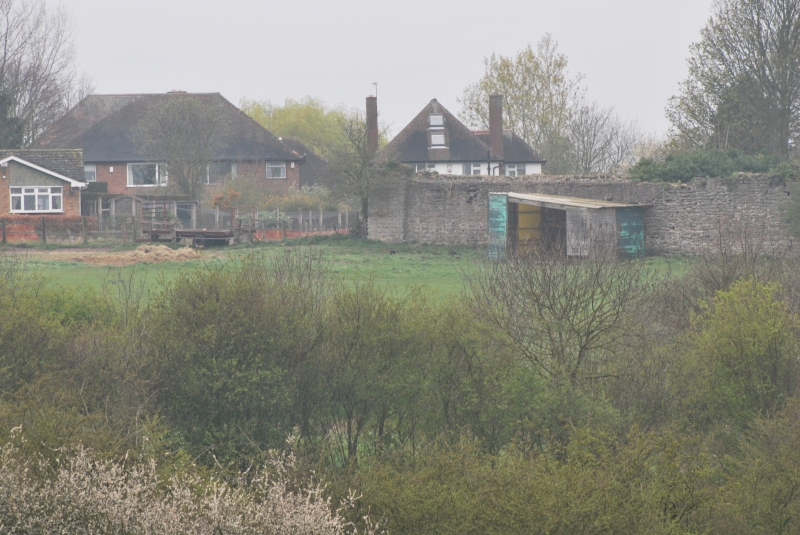 The monument is situated on the north eastern outskirts of Walsall and
includes the standing and buried remains of a medieval fortified house.
It is thought to have been constructed during the late 13th or early 14th
century by Geffrey Ive, replacing an earlier hall. During the Civil War, the
hall was owned by the Leigh family, supporters of the Parliamentarian cause.
It was besieged by Prince Rupert's Royalist forces and captured, but a year
later, in 1644, the hall was regained by Parliamentarian troops. It remained
in the possession of the Leigh family until 1811.
The site is bounded by a curtain wall which forms a rectangular enclosure with
external dimensions of 88m east-west and 56m north-south, within which the
house was situated. The 0.7m thick curtain wall is built of limestone rubble
and is mostly crenellated. In places, the wall survives to its full height of
6.3m. In the central part of the west wall is a gatehouse which provides the
main means of access into the enclosure. It was originally a square, three
storey structure, of which, the ground floor, parts of the first floor and the
south wall of the second floor survive. The gatehouse is built mainly of local
limestone rubble with sandstone dressings, although some brick is visible
within the fabric. The west wall of the gatehouse projects slightly beyond the
face of the curtain wall and its lower courses are battered. The outer and
inner gate arches are segmental arches of two chamfered orders and the passage
between them is barrel-vaulted. Above the western gate arch is a carved shield
bearing the arms of the Harpur family who owned the site from 1430 until 1540.
Access to the upper storeys is via a circular staircase in the north eastern
corner of the gatehouse. A detailed survey of the gatehouse ruins indicates
that it had a complex history and was built over an earlier gateway. Most of
the gatehouse structure is thought to date from the late 15th or early 16th
century, while the second floor was added approximately a century later. It
was partially demolished in 1830-40, but by the late 19th century, the
gatehouse had been consolidated and is believed to have been reused as a folly
or garden feature. The curtain wall and the gatehouse are Listed Grade II* and
are both included in the scheduling.
The internal face of the west curtain wall retains evidence that the gatehouse
adjoined a range of buildings which were built against this wall. A blocked
doorway at first floor level in the north wall of the gatehouse is thought to
have provided access to the first floor of an adjoining building. Fireplaces
built into the curtain wall, to the north and south of the gatehouse, are
further evidence for similar buildings. Similarly, brick-lined sockets, a
fireplace and scars within the fabric of the southern curtain wall indicate
that structures were also built here. There is little evidence to indicate the
character of these building ranges, but their foundations will survive beneath
the ground surface.
The enclosure formed by the curtain wall is divided into two courts by a wall
running north-south through the central part of the site. This wall stops
short of the north curtain wall in order to allow communication between the
two courts. The western court is thought to have been occupied by living
quarters for the hall's inhabitants and the slightly larger, eastern court
clearly had a different function; probably containing stables and ancillary
structures. The northern part of the western court is occupied by the present
Rushall Hall, a Grade II Listed Building. The house, built in the 19th
century, is in use as a dwelling and is excluded from the scheduling. The
western end of the north curtain wall has been incorporated within the house.
It serves as an interior wall and is not included in the scheduling; the
ground beneath the house, however, is included.
Approximately 14m to the north west of Rushall Hall is a feature which has
been interpreted as an Anglo-Saxon burial mound, thought to be associated with
the earlier occupation of the site. The burial mound is the subject of a
separate scheduling.
The present Rushall Hall and its outbuildings are excluded from the
scheduling. All fence posts, the surfaces of all paths and driveways and the
greenhouses in the north eastern part of the site are also excluded although
the ground beneath all these features is included.

The site at Rushall Hall is one of only three known examples of medieval
fortified houses known in the West Midlands. It served as a
prestigious residence and the provision of a curtain wall and gatehouse
clearly served as status symbols rather than practical military defences.
Structural remains will survive beneath the ground surface providing evidence
for the original layout of the buildings which existed within the curtain
wall. Together with buried artefactual evidence, they will also provide
information on the economy and lifestyles of the site's inhabitants. The
importance of the site is enhanced by the survival of historical documentation
relating both to the early history of the site and its occupancy during the
Civil War.