A Scheduled Monument in Chapel-en-le-Frith, Derbyshire 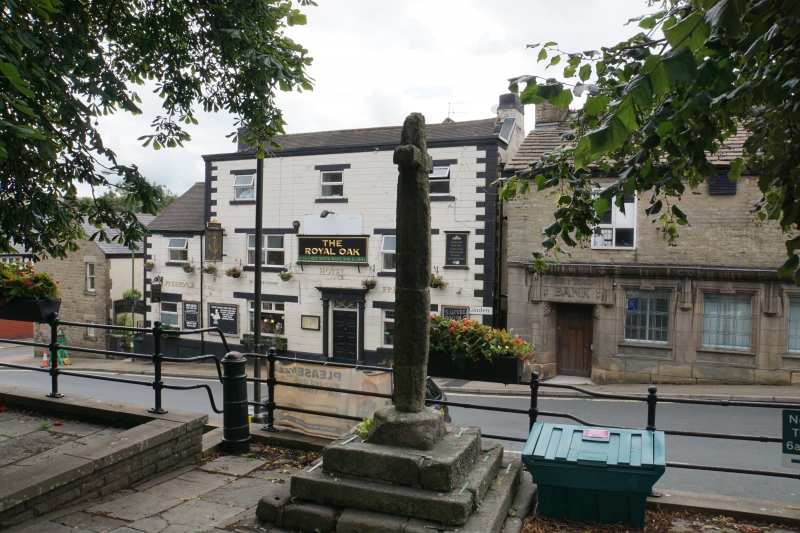 The monument is a late medieval or early post-medieval market cross located on
the south side of the market place in Chapel en le Frith. It is constructed of
gritstone and comprises a stepped base or calvary of four steps rising to a
roughly octagonal socle or socket stone surmounted by a tapering octagonal
shaft. At the top of the shaft is a Latin-style cross head which appears,
formerly, to have had an additional feature projecting from the top. This
feature is now missing and it is not clear what it may have been. The cross is
undecorated but for roll-mouldings on the terminals of the cross arms and on
the east and west faces of the cross head. In addition, the socle has sloping
chamfered corners so that the base is square rather than octagonal and
measures c.50cm on each side. The shaft is over 2m tall and c.30cm square, and
the base step has a diameter of c.2.5m. The shaft is in four sections which
have been mortared together and this, together with the fact that the cross
head is also mortared in place, suggests that the monument has been broken and
restored. In the past, a date of 1643 has been suggested for the cross but the
reason for this is unclear. In addition to being scheduled the cross is Listed
Grade II.
A number of features falling within the area of the scheduling are excluded
from the scheduling; these are the modern paved surface and railings, a lamp
post and a bollard, although the ground beneath all of these features is
included.

Chapel en le Frith market cross is a well preserved and visually impressive
example of a later standing cross which appears to be in its original location
and retains its original components.