A Scheduled Monument in Catterlen, Cumbria 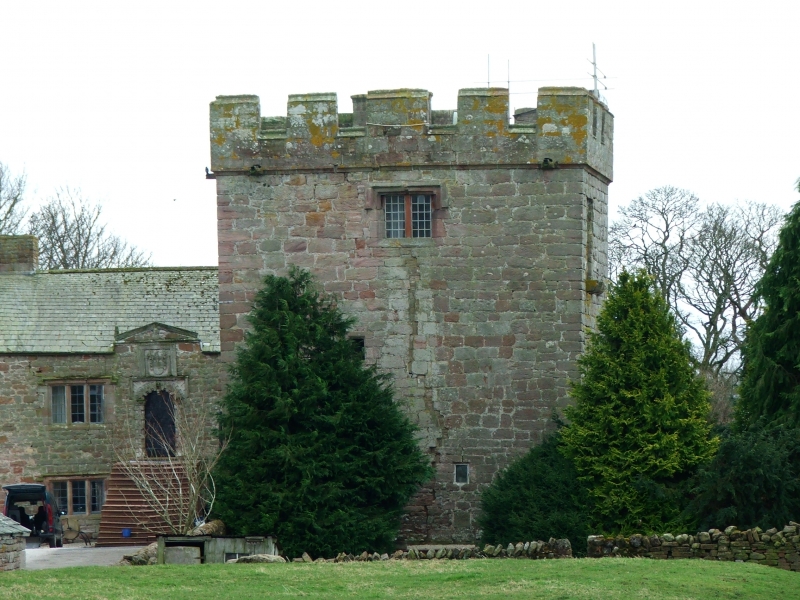 The monument includes the upstanding mid-15th century tower house at Catterlen
Hall. It has walls up to 1m thick and is constructed of thick pink sandstone
blocks on a projecting boulder plinth. The tower lies at the northern end of a
range of later buildings. It has external dimensions of 9.1m by 5.9m and is
entered through an off-centre Tudor-arched doorway on the southern side which
leads into a ground floor barrel-vaulted basement lit by five loopholes or
narrow windows. Access to the upper floors is by a newel stairway entered
through a narrow passage in the thickness of the wall immediately within the
entrance. The first floor was a solar (private chamber), usually a bedroom or
living room, attached to which is a small closet thought to have been a
garderobe or toilet. The main window is in the east wall and there are small
windows in the north and west walls. Originally there was a fireplace in the
south wall. The second floor was the sleeping chamber. It is lit by windows in
the north and east walls, both with stone seats in the jambs. In the west wall
there is a gap where a doorway led onto a wooden bretasche or platform used
for defensive purposes. The newel stair continues up to a flat roof and a
projecting battlemented parapet with stone water spouts.

Catterlen Hall tower house is thought to have been constructed c.1460 by
William de Vaulx and replaced an earlier tower, the earthwork remains of which
lie a short distance to the north. In 1577 an Elizabethan wing was added to
the south of the tower and in 1657 a Renaissance wing was added to the south
end of the Elizabethan wing. During the 1970's and 80's the tower was
renovated. This work was clearly undertaken very carefully and with the
preservation of the tower as a monument clearly in mind. Consequently all
works were designed to have minimal impact on the medieval fabric. The
monument is a Listed Building Grade I. The 16th and 17th century wings, which
are inhabited, are not included in the scheduling.

Part of the access drive and all paths and garden walls within the 2m boundary
on the monument's north, east and west sides are excluded from the scheduling
although the ground beneath these features is included.

Tower houses are a type of defensible house particularly characteristic of the
borderlands of England and Scotland. Virtually every parish had at least one
of these buildings. Solitary tower houses comprise a single square or
rectangular `keep' several storeys high, with strong barrel-vaults tying
together massive outer walls. Many towers had stone slab roofs, often with a
parapet walk. Access could be gained through a ground floor entrance or at
first floor level where a doorway would lead directly to a first floor hall.
Solitary towers were normally accompanied by a small outer enclosure defined
by a timber or stone wall and called a barmkin. Tower houses were being
constructed and used from at least the 13th century to the end of the 16th
century. They provided prestigious defended houses permanently occupied by
the wealthier and aristocratic members of society. As such, they were
important centres of medieval life. The need for such secure buildings
relates to the unsettled and frequently war-like conditions which prevailed in
the Borders throughout much of the medieval period. Around 200 examples of
tower houses have been identified of which less than half are of the free-
standing or solitary tower type. All surviving solitary towers retaining
significant medieval remains will normally be identified as nationally
important.

Despite the addition of an Elizabethan wing and recent restoration, Catterlen
Hall tower house survives extremely well and is a very good example of this
class of monument. It retains considerable medieval fabric and many original
architectural features.