A Scheduled Monument in Rolleston on Dove, Staffordshire 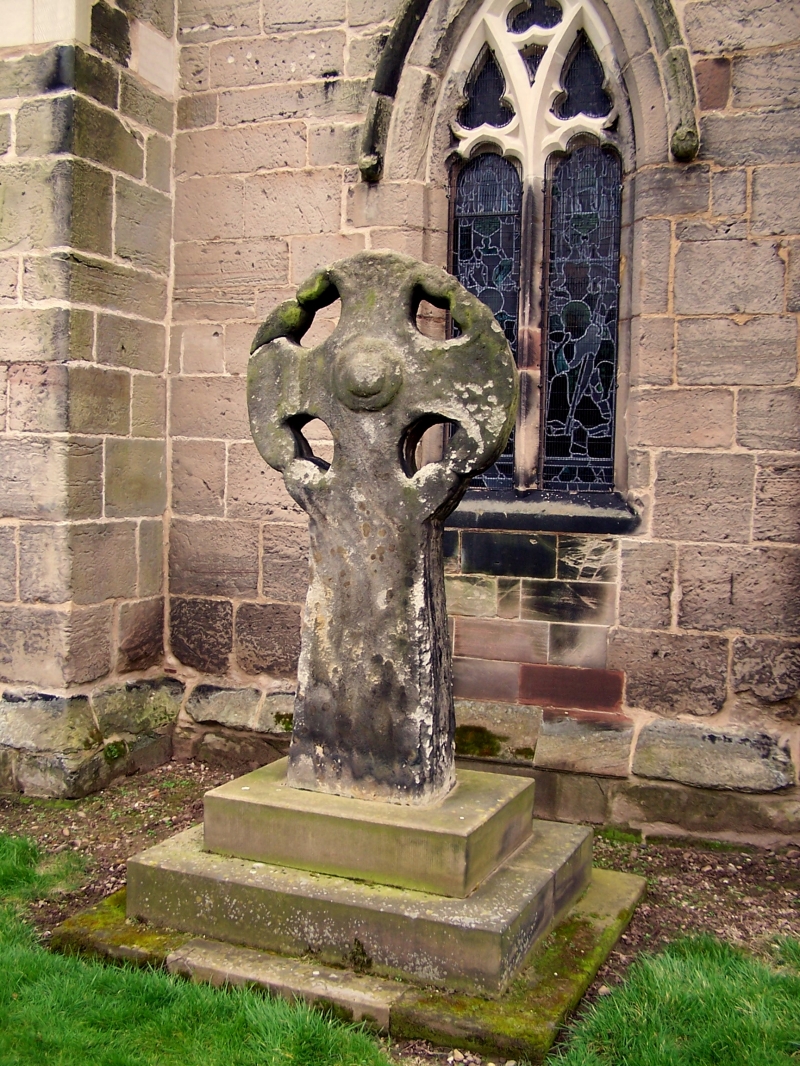 The monument includes an Anglo-Scandinavian stone cross located in the
churchyard of St Mary's Church, Rolleston, 0.75m west of the church. The
cross is of stepped form and is early medieval and modern in date. The
monument includes the base, consisting of a plinth and two steps, of late 19th
century date; and an early medieval shaft and cross-head which have been
carved from a single block of stone.
The steps are rectangular in plan and rest on a stone plinth. The shaft has
been erected on the upper step and has a tapering, rectangular section. The
shaft stands 0.9m high and is believed to represent the upper part of the
early medieval cross-shaft. The southern face of the shaft retains evidence of
decoration in the form of a plaitwork interlacement enclosed within a panel;
while the faint outline of a rectangular panel can be distinguished on the
western face. The cross-head is of the ringed type and has a diameter of
0.92m. Its four arms are not continuous but end as curled knobs at the
extremeties. These join with one another, and the arms thus form, on the
outside, an indented circle. The outer circumference of the lower part of the
head is ornamented with single cord interlacement set within moulded panels
and slight traces of an interlacing triquetra (an ornament of three interlaced
arcs) are visible on the southern arm. The western face of the cross-head is
decorated with a carved central boss and an encircling ring. The full height
of the cross is approximately 2.3m. The protected area includes a 1m margin
around the north, west and east sides of the cross.

The Anglo-Scandinavian cross at Rolleston survives well and is the only known
Staffordshire example of a cross with a complete cross-head which remains
attached to its shaft. The Scandinavian-influenced decoration on both the
shaft and the head provide an important contribution towards an understanding
of the regional and chronological variations in the design of early medieval
crosses. While the cross-head and part of the shaft survive from the early
medieval period, its erection in the churchyard and subsequent restoration
illustrate its continued function as a standing monument and public amenity.