A Scheduled Monument in Mattersey, Nottinghamshire 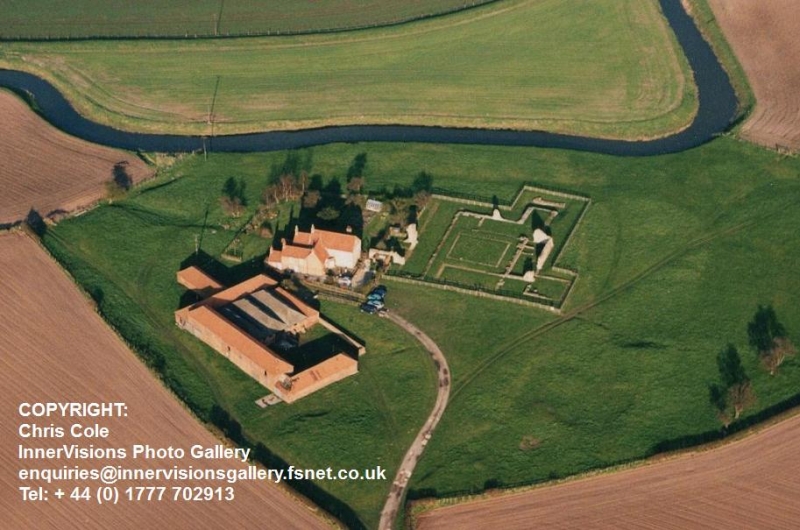 Mattersey Priory is situated on the west bank of the River Idle east of
Mattersey village. The monument includes the ruins of the Gilbertine priory
of St Helen and the area of the outer precinct.
The visible remains include part of the twelfth century church, three partly
blocked arches of the frater (refectory), the south wall, the foundations of
the fourteenth century kitchen, and, to the north of the church, a fifteenth
century tower. Partial excavation of the site, carried out in 1914 by the then
Ministry of Works, revealed the buried foundations of the east and south
ranges of the cloister. The east range consisted of a single ground floor room
with the dorter (sleeping quarters) above, and the south range, the undercroft
below the frater. The kitchen lay at its south-west corner and the reredorter
(latrine) ran east from the east range, at right-angles to its southern end.
The foundations of the west range also survive beneath the present ground
surface, and the remains of ancillary buildings such as barns, a bakehouse and
an infirmary, will lie along with the remains of stock-pens and enclosures,
within the area of the outer precinct and under the present farmbuildings and
yards of Abbey Farm.
The priory was founded in the late twelfth century for six canons of the Order
of St Gilbert of Sempringham. Never prosperous, the priory suffered badly when
the church was destroyed by fire in 1279 and never rebuilt. It was one of the
first to be affected by the Dissolution of the Monasteries and was suppressed
in 1538, when its estate was granted to the Neville family. The monument has
been in state care since 1913 and the farmhouse is a Grade II Listed Building.
There are a number of features to be excluded from the scheduling. These are
English Heritage fittings such as notices, ticket office and grilles, all
modern fencing and walling, the surfaces of paths, drives and yards, and the
house and outbuildings of Abbey Farm. The ground beneath all these exclusions
is, however, included.

From the time of St Augustine's mission to re-establish Christianity in AD 597
to the reign of Henry VIII, monasticism formed an important facet of both
religious and secular life in the British Isles. Settlements of religious
communities, including monasteries, were built to house communities of monks,
canons (priests), and sometimes lay brothers, living a common life of
religious observance under some form of systematic discipline. It is estimated
from documentary evidence that over 700 monasteries were founded in England.
These ranged in size from major communities with several hundred members to
tiny establishments with a handful of brethren. They belonged to a wide
variety of different religious orders, each with its own philosophy. As a
result, they vary considerably in the detail of their appearance and layout,
although all possess the basic elements of church, domestic accommodation for
the community, and work buildings. Monasteries were inextricably woven into
the fabric of medieval society, acting not only as centres of worship,
learning, and charity, but also, because of the vast landholdings of some
orders, as centres of immense wealth and political influence. They were
established in all parts of England, some in towns and others in the remotest
of areas. Many monasteries acted as the foci of wide networks including parish
churches, almshouses, hospitals farming estates and tenant villages. The
Gilbertine order, thought to have been the only order to originate in England,
was initially established for men and women. The founder, St Gilbert of
Sempringham, founded double houses from 1131 until his death in 1189. After
this time the houses founded were mainly for canons. Of the total of 29
Gilbertine foundations, 16 were for men. The order originated in Lincolnshire
and most of the houses were established in that county, although others were
established throughout eastern England. Small numbers of Gilbertine canons
sometimes served hospitals, and at Old Malton, Yorkshire, a training and
retreat house was established. As a rare type of monastery, all examples
retaining significant remains of medieval date are worthy of protection.

Only twenty-nine Gilbertine houses were founded and, of these, only sixteen
were for canons alone, the remainder being double houses for both men and
women. Mattersey Priory, therefore, with its standing remains and extensive
buried deposits, is one of an important and rare class of monastic monuments.