The western of two rectangular enclosures on Great Litchfield Down, SSW of Ladle Hill

A Scheduled Monument in Burghclere, Hampshire 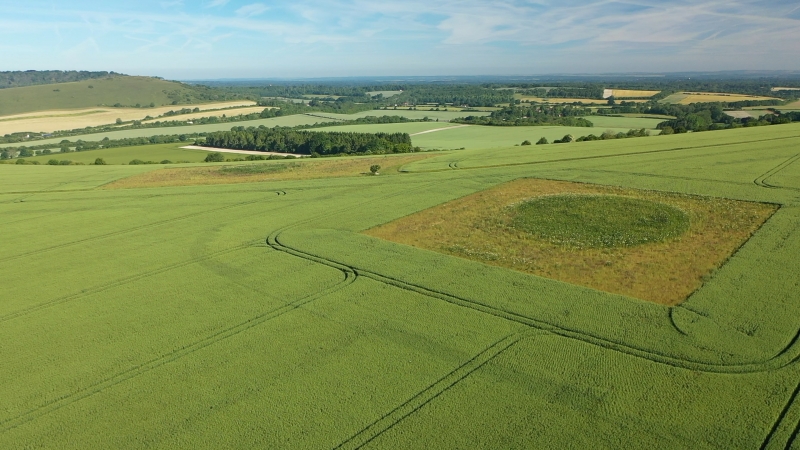 Entry Name: The western of two rectangular enclosures on Great Litchfield Down, SSW of Ladle Hill

Church of England Parish: Whitchurch with Tufton with Litchfield

The monument includes the western of two rectangular enclosures of possible
Bronze Age date on Great Litchfield Down. The enclosure is on the crest of a
ridge running south west from Ladle Hill, c.100m west of the eastern
enclosure.
The square enclosure is most clearly defined by an irregular low bank, each
side being c.28m in length, beyond which a band of dark soil marks the line of
an infilled ditch. A second, outer, bank has been levelled but gives the
enclosure overall dimensions of c.38m square. At its largest, at the north
eastern side of the enclosure, the upstanding bank is up to 5m wide and has a
maximum height of 0.4m. A 5m wide entrance occurs in the middle of the south
eastern side.

Small enclosed settlements dating from the Middle Bronze Age are often
associated with earlier field systems and are known on some sites to have
replaced earlier unenclosed settlements. Enclosures of both sub-rectangular
and curvilinear plan are known; the sites are wholly or partly surrounded by a
ditch, bank or palisade, or by a combination or succession of all three. Where
excavated, sites have usually been found to contain a small group of domestic
buildings sufficient for a single or extended family group, although a few
larger enclosures are known. Evidence of a succession of buildings has been
found on some sites. The buildings are usually circular in plan but occasional
rectangular structures are known. Both types of building would have provided a
combination of living accommodation and storage or working areas. Storage pits
have been recorded inside buildings on some sites but are generally rarely
present. In addition to pottery and worked flint, large quantities of burnt
stone and metal working debris have been found in some enclosures.
Although the precise figure is not known, many small enclosed settlements are
located on the chalk downland of southern England. As a class they are
integral to understanding Bronze Age settlement and land use strategies, while
their often close proximity to the numerous burial monuments in the area will
provide insights into the relationship between secular and ceremonial activity
during the Middle Bronze Age.
A small number of small enclosed settlements survive on downland as visible
earthworks; the majority, however, occur in areas of more intensive
cultivation and survive in buried form, visible only from the air as soil
marks and crop marks. All examples with visible earthworks, and those in
buried form which retain significant surviving remains, are considered to be
of national importance.

Much of the archaeological landscape of Ladle Hill and the surrounding downs
is preserved as earthworks or crop- or soil-marks, which together will provide
a detailed understanding of the nature and development of agriculture, land
use and settlement on the north Hampshire downs. The western enclosure on
Great Litchfield Down is part of the wider distribution of monuments of Bronze
Age and later date on the downs and will contain archaeological and
environmental information relating to the construction and use of the
monument.