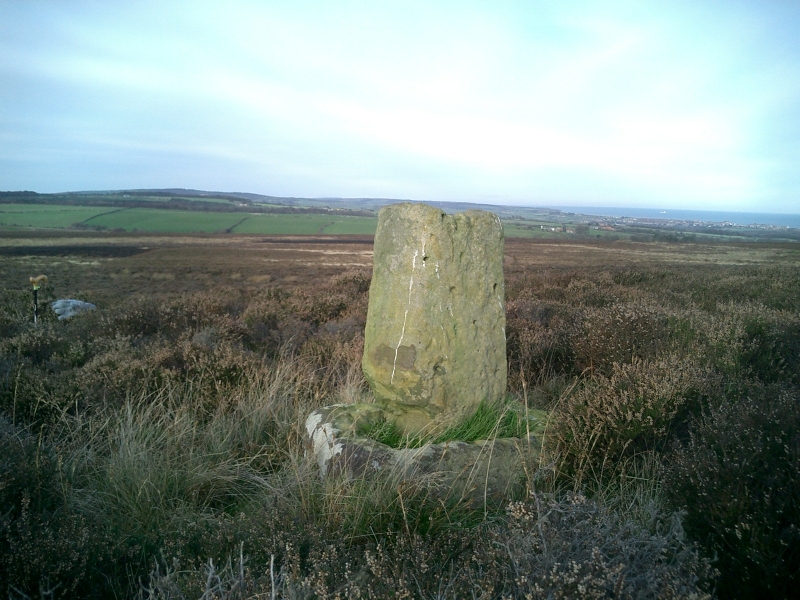 The monument includes the wayside cross known as Postgate Cross set up 300m
west of the A171 - the Robin Hood's Bay road. A former course of this road can
be seen as a ridge in the heather parallel to the present road and 50m west of
the monument. This was an old salters' road and at Sneaton Corner it becomes a
footpath leading south west to Lilla Howe.
The cross consists of a base made of fine yellow sandstone with a socket hole
and the broken remains of the shaft. The base block stands 0.36m high and
measures 0.74m on the north face and 0.57m on the east side. The broken shaft
stands 0.63m high and is set in the socket hole with loose stones to support
it. This has eroded the hole to an oval shape 0.39m by 0.32m where the shaft
is 0.35m wide and 0.23m deep.
The cross is of a medieval date and the shaft is original. It stands in its
original position marking the line of the Old Saltergate.

The wayside cross known as Postgate Cross survives well despite the loss of
the head. It is in its original position marking an important pack horse route
used to carry fish and salt from Robin Hood's Bay across the moors towards
Pickering. It served to mark this route and remind the traveller of the
protection of Christianity, particularly of the monastery of Whitby in the
medieval period.