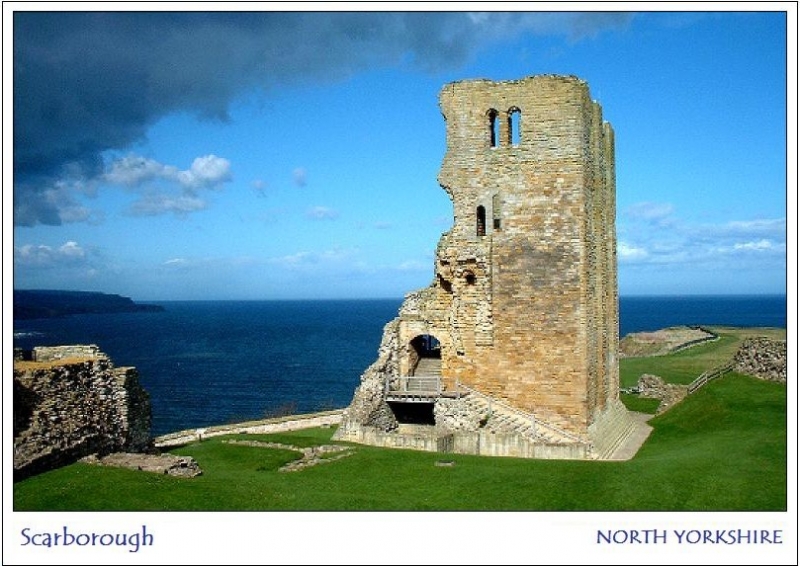 Scarborough Castle is situated in a prominent cliff-top location overlooking
the town to the west and the North Sea to the east. The monument is a multi-
period site comprising a single area containing a number of features. These
include the buried remains of a Late Bronze Age/Iron Age settlement, a Roman
signal station, the site of an early 11th century chapel belonging to the
Anglo-Scandinavian settlement, the 12th century enclosure castle which
continued in use down to the 19th century, and an 18th century gun
battery.
Evidence for the earliest of these features was discovered during partial
excavation on the site of the Roman signal station in 1920-24. A large number
of pits were found containing bronze axes and tools, items of jewellery made
of shale and bronze, material associated with bronze smelting, and a quantity
of Iron Age pottery. A bronze sword was found in 1980 and two urn burials
have also been uncovered. The evidence indicates settlement on the headland
from about the sixth century BC and it is likely that the site was a
promontory fort whose defensive earthworks may have been incorporated into the
medieval defences. This, however, has yet to be confirmed.
Archaeological investigation of the prehistoric settlement has so far
concentrated on the eastern extreme of the headland around the Roman signal
station. The signal station itself was one of a string established in the
fourth century AD along the North Sea coast to warn of sea-raids. Others are
recorded at Huntcliff, Goldsborough, Ravenscar and Filey whilst, at Whitby,
Roman material suggestive of a sixth has been recovered. The example at
Scarborough comprised a square, ditched enclosure with rounded corners and
small angle bastions. This had a diameter of 33m and enclosed a small
courtyard containing a double-stepped plinth which formed the base for a
central tower between 27m and 30m high. The signal tower was built of wood
but had stone foundations and was guarded by a gatehouse that controlled the
entrance into the courtyard. Coin evidence indicates the station was built in
c.AD 370 and occupied almost continuously until the early fifth century when
it was overrun and destroyed. The remains excavated in the 1920s are now laid
out for the public to view, but parts have been destroyed by the erosion and
partial collapse of the cliff, as has the medieval Cockhill Tower which
formerly stood at the southernmost point of the headland.
Found on the same site as the signal station were the remains of a chapel
built in c.1000. Three of the walls of the signal station were incorporated
into three sides of the chapel, the south side alone being new. Little is
known about the chapel except for its layout. It had a square chancel with a
diameter of 3.6m and a nave measuring 6m by 5.1m. The churchyard was enclosed
by the wall of the Roman courtyard. Documentary evidence indicates that the
pre-Conquest town of Scarborough was founded by two Viking brothers, Thorgils
and Kormac, and it would have been this settlement that the chapel served.
The chapel was destroyed in the mid-eleventh century, most likely during the
reputed sacking of the town by Harald Hardrada and Tostig Godwinsson.
Although no other remains of the town have so far been found it is believed
that evidence of Anglo-Scandinavian occupation will survive on the headland in
the vicinity of the chapel.

The defensible position of the headland, steep cliffed on all but the south-
west side and joined to the mainland only by a narrow isthmus, led in c 1135
to it becoming the site of a castle. The original fortifications comprised a
ditch cut into the natural gorge that crossed the isthmus surmounted by a wall
or palisade. A gatetower was built to protect the entrance which then lay
somewhere along the approach between the later medieval barbican and keep.
There was no keep in the early castle, but the remains of a wide range of
timber buildings dating from this time, and including both garrison and
domestic structures, will survive on the headland between the entrance and the
cliff edge. The sites of two 12th century buildings are already known: the
highly decorated stone-built Chapel of Our Lady, built on the remains of the
chapel destroyed in 1066, and a free-standing Norman hall of aisled
construction. The landward side of the headland was fortified by a curtain
wall begun at this time. The visible remains of this wall, however, date to
the late 12th and early 13th centuries when it was strengthened by the
addition of a series of round-fronted towers. This work formed part of a
major programme of refortification begun between 1158 and 1164, during which
time too the gatetower was demolished and a stone keep built at the head of
the isthmus. An inner bailey was created behind the keep by the construction
of a palisaded bank and ditch. A stone gateway at the northern end provided
access to the rest of the headland, which now became the outer bailey. The
keep was square in plan, about 30m high, had a turret at each angle and was
four-storeyed.
Typically of the period, access was via a flight of stone steps which led from
outside the south face of the keep, through a forebuilding and to the first
floor. Later in the 13th century, the inner bailey was given a stone wall
with two gatehouses, a new outer gate and barbican were built, and the
causeway across the outer ditch was given two drawbridges. Within the castle,
the remains of a number of later medieval buildings can be seen in the bailey
and against the curtain; amongst them Mosdale Hall, rebuilt in the late 14th
century by the then governor of the castle, John Mosdale. Also, in its
original form, of 14th century date, is the wall leading from the postern at
the southern end of the curtain wall which shielded the path that led from the
castle down to the harbour. Two wells are also known: Our Lady's Well, located
within the signal station, and the late 12th century castle well inside the
inner bailey. A third chapel also existed, built on the site of its
predecessors in c.1312 and destroyed in the 17th century.
The medieval castle was originally founded by William le Gros, Earl of
Albemarle. In 1154, however, it was seized by Henry II and, but for three
days in 1557 when it was held by Sir Thomas Stafford, it remained a royal
castle until 1619 when it was granted by James I to John, Earl of Holderness.
Its royal owners spent considerable sums maintaining and improving its
defences. It suffered damage from time to time during the foreign wars and
political struggles of the 14th and 15th centuries, was attacked on numerous
occasions by the French and Scots during the 16th century. It underwent two
prolonged sieges during the Civil War of the 17th century, after which it was
slighted by order of Parliament though the west face of the keep had already
been destroyed by canon and other buildings had been severely damaged. The
keep was never repaired but some parts of the castle were restored and new
buildings were added. In 1746, in response to the perceived threat of the
Young Pretender to the English throne, barracks for 120 troops were built on
the remains of Mosdale Hall and the South Steel Battery was constructed at the
southernmost point of the castle to house twelve guns overlooking and
controlling the harbour. A garrison was still kept at the castle into the
19th century but it had little military use and, in 1914, was bombarded by two
German cruisers who damaged buildings including the barracks. The headland and
ruins have been in State care since 1920 and are in the ownership of the
Crown.
A number of features within the protected area are excluded from the
scheduling. Within the castle walls these include the ticket office and all
modern fixtures and fittings such as benches, railings, safety grilles,
lighting and information boards, the canons and Master Gunner's house, and the
surfaces of all paths and modern steps; outside the castle walls, in Castle
Dikes, excluded features include the playground, benches, lamp posts, bins,
telegraph poles and the surfaces of public footpaths; the ground beneath the
excluded features, both within and outside the castle walls, is included in
the scheduling.

Scarborough Castle is a very well-documented example of an enclosure castle
whose military importance lasted throughout the Middle Ages and into the early
modern period. As a royal castle it has played a very important role in the
political history of England and has been the setting for a number of
historically significant events. Despite being damaged in the later part of
its history, its standing remains survive well. In addition, the buried
remains of structures and features relating to all phases of occupation
survive within its two baileys and outside its walls on Castle Dikes. These
include prehistoric, Roman and Anglo-Scandinavian remains in addition to
medieval and later.