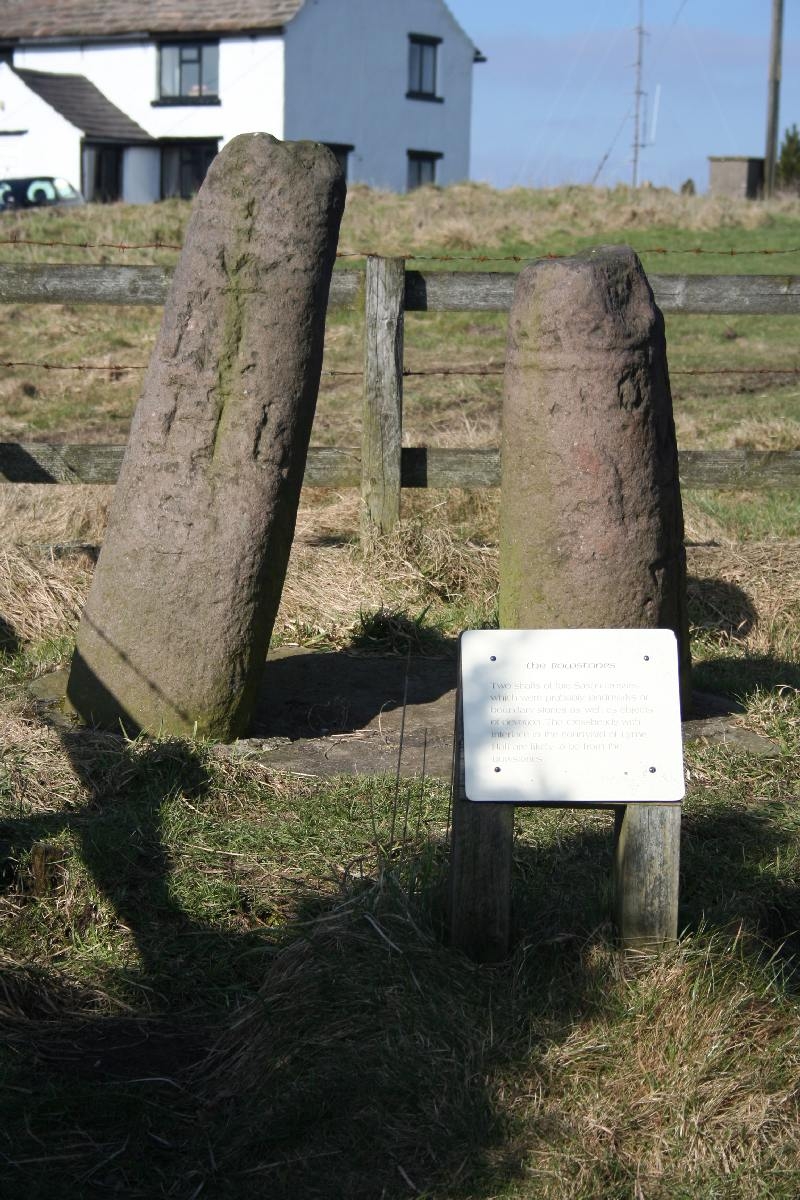 The monument is the Bow Stones, two Anglian cross shafts located on Higher
Moor beside the old ridgeway between Disley and Macclesfield. It includes a
pair of cylindrical late Anglian cross shafts set in a single base stone. The
western cross shaft measures 1.22m high and is 1.25m in circumference at the
base, tapering to 0.86m in circumference at the top. The eastern cross shaft
measures 0.98m high and is 1.27m in circumference. Both shafts have a cordon,
or rounded stone moulding, near the top with interlaced decoration above,
indicating a date not later than the 10th century. Both shafts have lost their
heads, although it is thought that two stone cross-heads now at nearby Lyme
Hall may be these. Both shafts have post-medieval lettering carved into them.
They are known as the 'Bow Stones' because of a local folk tradition that
Robin Hood and his followers re-strung their bows near here.
A wooden fence on three sides of the monument and an information sign on the
monument's south-eastern side are excluded from the scheduling, although the
ground beneath these features is included.

Freestanding crosses, frequently heavily decorated, were erected in a variety
of locations in the 8th, 9th and 10th centuries AD. They are found throughout
western and northern England, although they are particularly concentrated in
the north. Surviving examples are all of carved stone but it is known that
decorated timber crosses were also used for similar purposes. Such crosses
comprise shafts supporting carved cross-heads. They might be set within a
carved stone base. The cross-heads were frequently small, the broad
cross-shafts being the main feature of the cross. They were erected in a
variety of locations and appear to have served a variety of functions. Some
are associated with established churches and monasteries and may mark burial
places, focal points used in religious services, or the boundaries of
ecclesiastical land-holdings. Others may have marked route-ways or other
gathering points for local communities. All examples tend to be heavily
decorated, the patterns and ornament used drawing on wider artistic traditions
of the time. Patterns of interlace are common, some depicted as 'vine-
scrolls', tendrils of growth of the grape vine, sometimes complete with
leaves. On the most developed examples this 'vine-scroll' is shown to be
inhabited by a variety of birds and animals. Panels depicting figures and
animals are also commonly found; on occasion these depict Biblical scenes or
personages. This carved ornamentation was often painted in a variety of
colours, although traces of these colourings now survive only rarely.
The earliest examples were created and erected by native communities; later
examples were heavily influenced by Viking art styles and mythology and their
creation can be related to the Viking infiltration and settlement of the north
of England. Several distinct regional groupings and types have been
identified, some being the product of single 'schools' of craftsmen.
Around 200 examples of such crosses have been identified. This is likely to
represent only a small portion of those originally erected. Some were defaced
or destroyed during bouts of iconoclasm in the late medieval period. Others
fell out of use and were taken down and re-used in new building works. They
provide an important insight into art-traditions and changing art-styles. The
figured panels provide information on religious beliefs. The Viking period
stones contribute to studies of the impact of the Scandinavian newcomers into
the north of England. All well preserved examples are identified as
nationally important.
The Bow Stones crosses survive well, despite the loss of their heads. They are
unusual in having round cross-shafts and this may point to a local tradition
of carving. The pairing of the crosses is also unusual.