A Scheduled Monument in Sheviock, Cornwall 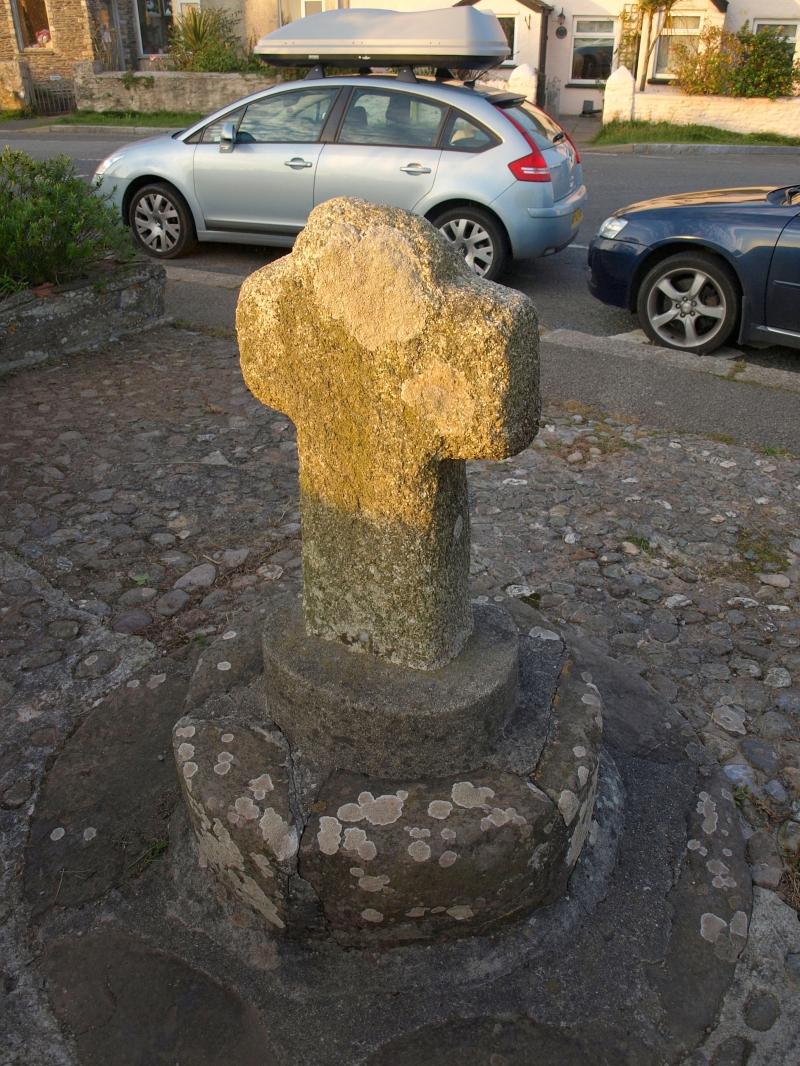 The monument includes a medieval wayside cross at Crafthole and a protective
margin around it near the south coast of Cornwall. The cross is located at the
junction of the route north east to the parish church at Sheviock with the
coastal route linking the small ports and villages.

The wayside cross survives as an upright granite head and shaft set on a
modern three stepped base. The cross-head has unenclosed arms, a form called a
`Latin' cross, its principal faces orientated east and west. The cross stands
0.79m high above the base. The head measures 0.49m across the side arms, each
of which are 0.13m wide and 0.11m thick. The upper limb is 0.25m wide and
0.11m thick, but it has been fractured across, surviving only to a height of
0.11m. The shaft is 0.29m wide by 0.16m thick at the base tapering slightly to
0.25m wide by 0.12m thick below the side arms.

The modern base consists of three steps: the top step is oval in shape with
cracked rendering, broken away on the east side to reveal brick beneath. This
step is 0.48m wide by 0.38m thick and 0.14m high. This oval step is set on a
round step constructed of large stones and cement, 0.78m wide and 0.25m high.
This step is secured by a 0.07m thick layer of cement to the top of the bottom
step, also constructed of large stones and cement, projecting 0.28m beyond the
middle step, and set almost flush with the ground, rising 0.04m high above
ground level.

This wayside cross is situated at a crossroads at Crafthole, formerly an
important medieval centre licensed in AD 1315 to hold a market. Within the
small town, the cross marks the point where the route from Portwrinkle on the
coast to the parish church at Sheviock crosses the main route along the coast,
running behind the coastal cliff. This latter route was formerly one of the
main routes of entry into Cornwall from the ferry across Plymouth Sound. The
cross was first recorded in 1775, and originally stood at the centre of the
crossroads but it was moved to the side of the road for its safety. It was
illustrated by the historian Langdon in 1896, showing it mounted on the lower
two of the present basal steps; the upper step of rendered brick is a
subsequent addition.

This wayside cross at Crafthole has survived well, despite being re-set on a
later base. Although slightly relocated, this cross remains as a marker on
its original routes and junction, demonstrating well the function of wayside
crosses and showing clearly the longevity of many routes still in use.