A Scheduled Monument in Castleton, Derbyshire 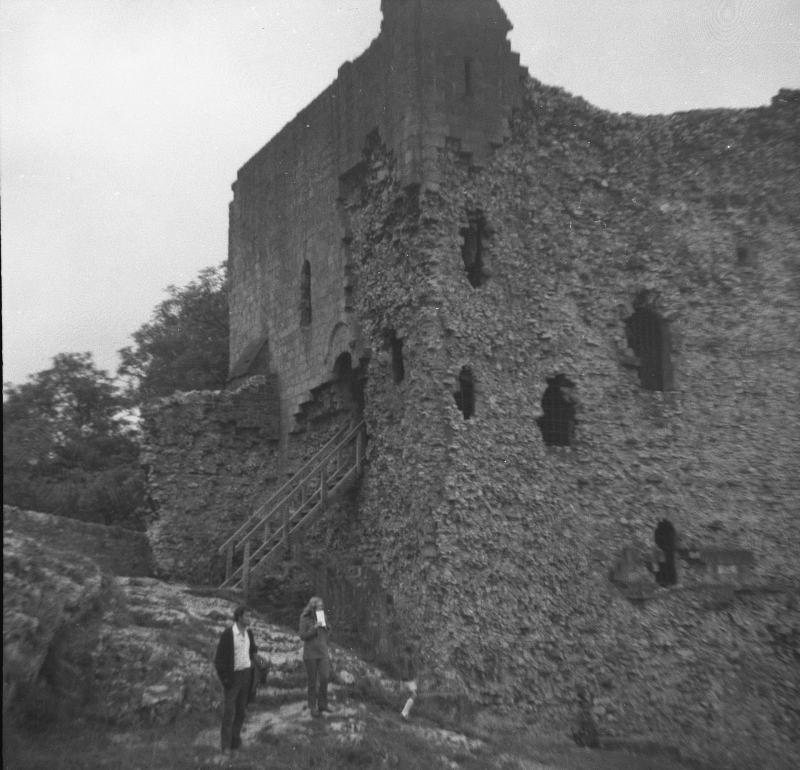 Peveril Castle is a tower keep castle situated above the north bank of Cave
Dale to the south of Castleton. The monument comprises two constraint areas,
divided by a narrow ravine, the first incorporating the standing remains of
the castle along with the terraced hillside leading to the north-east gate,
and the second containing the site of the outer bailey and access to the main
south-west gate.
The standing remains of the monument consist primarily of the square keep and
a curtain wall enclosing a roughly triangular inner bailey measuring c.100m x
60m. The north wall, although much repaired and altered, still contains
eleventh century sections, though the remainder of the curtain is twelfth
century. The keep, which stands almost to its original height and is also
twelfth century, was originally entered at the first floor. It was a
primarily defensive feature and, as the castle had fallen into disuse by the
fifteenth century, was not adapted to domestic use. It therefore remained a
simple structure with only one floor above the entrance level and a basement
floor below. Its main function was to guard the south-west gate into the
inner bailey. This was reached from the outer bailey via a bridge which,
during the Middle Ages, spanned the intervening gorge. A masonry abutment for
the bridge can be seen in the ditch below the keep.
The outer bailey lies to the south-west where a bank and ditch forms the
western boundary of a triangular enclosure, measuring c.80m x 60m, where
cattle, horses and people would have been housed. The bank contains the
remains of a defensive wall and a gap approximately midway along it shows
where the `Earl's road' entered the castle from the south-west at its
main point of access.
The steep path up the hillside from the north, which entered the inner bailey
via the north-east gate, was a consequence of the town's foundation in the
late twelfth century and was largely for pedestrian use, being too steep for
vehicles. The castle itself was founded in 1086 and remained in the hands of
the Peverel family until 1155 when it was taken over by the Crown. It was
granted to John of Gaunt by Edward III in the fourteenth century, thus
becoming part of the Duchy of Lancaster, and remained in use until some time
after 1400. The standing remains and the northern approach have been in State
care since 1932 and the standing remains are a Grade I Listed Building. There
are a number of features which are excluded from the scheduling. These are
the sales office, the surface of the modern path leading to the inner bailey
and all English Heritage fixtures such as railings, safety grilles and
notices.
The ground beneath all these features is included in the scheduling.

Peveril Castle is an important and well-documented example of a tower keep
castle and is one of a very small number nationally to be built of stone
immediately after the Conquest. As a result, substantial sections of eleventh
century masonry survive. In addition, considerable archaeological deposits
survive both in the inner bailey and along the approach from the north, and
also, in particular, in the outer bailey which has never been excavated.