A Scheduled Monument in Oakham, Rutland 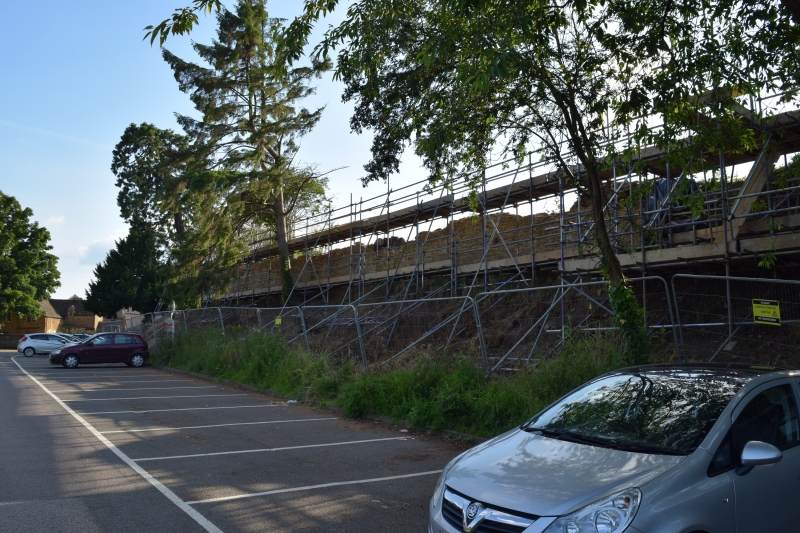 Oakham castle occupies a central position in the former county town of
Rutland, now part of Leicestershire. The castle complex comprises a standing
great hall and the remains of a motte or mound inside a square inner bailey.
To the north of this is a large rectangular outer bailey known as Cutts Close
which contains dry fishponds and garden earthworks.
The inner castle bailey measures approximately 140 x 140m in overall
dimensions. The great hall is situated close to its western boundary, and
consists of an aisled building measuring 20 x 13m internally, and is built of
ironstone rubble with cut stone dressings. The inner bailey is delimited by a
curtain wall dating to the 13th century. On the inside, a bank, consisting of
grassed-over collapsed stone and rubble, slopes up to the wall and the remains
of two towers or bastions can be identified on the western side. In the south
east corner is the castle motte adjoining the enclosure wall at its highest
point. It stands to a height of about 6m and has a surrounding ditch which is
up to lm deep and 8-10m wide. The ground surface of the bailey is uneven,
signifying the foundations of buildings, many of which are known from
documentary evidence. The gateway on the south side, is still in use,
although it has been rebuilt many times. To the north, the outer bailey known
as Cutts Close contains earthworks of gardens and fishponds which are
mentioned in 14th century documents. A substantial bank, up to 2m high,
surrounds the perimeter of the outer bailey and also forms the fishponds.
Oakham was the administrative centre of the manor of Oakham, with its courts
and system of self government, and also the emerging county of Rutland.
The hall of Oakham castle is listed in Domesday book and would have
been represented at that time by a wooden building. The stone-built hall
which survives today was built by Walkelin de Ferrers between 1180 and 1190.
A 14th century document describes the castle in detail with a garden,
fishponds and a moat. The period 1372-1386 is particularly rich in recorded
detail with accounts of work done and grants made, but by 1521 the castle
appears to have been in decline with much except the hall, which was used as a
law court, in ruin. An engraving of 1684 shows the hall freestanding inside
the castle enclosure, as it is today. There have been a number of
archaeological excavations, that of 1953 confirming that the inner bailey was
moated. In 1989 an archaeological evaluation of Cutts Close indicated that
the south west bank was pre Norman.
The castle site today is in the care of Leicestershire County Council, and
Cutts Close is a grassed public recreation area. The great hall is a grade I
listed building and is excluded from the schedule, as are the buildings
adjoining it and the metalled driveway and car park in front of it. Also
excluded in Cutts Close are: a bandstand, a disused paddling pool, childrens
swings, the metalled pathways and a public shelter. The ground beneath all
the above mentioned structures is included in the scheduling.
A Second World War gun emplacement at the north east corner of Cutts Close and
a 19th century garden folly in the eastern wall of the castle are both
included in the scheduling.

Oakham castle played a central role, not only as a medieval defensive
fortification, but also as the administrative centre, initially of the manor
of Oakham, and then in the formation of the county of Rutland. The diversity
of features incorporated in the monument, including well documented medieval
gardens, make it a site of exceptional historical value.