Motte and bailey castle and manorial complex at Groby

A Scheduled Monument in Groby, Leicestershire 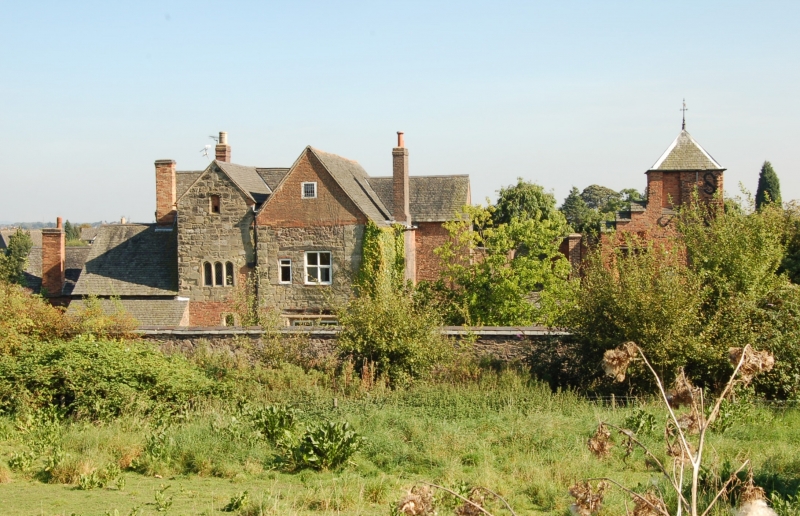 The monument at Groby is situated on the north side of the village and
includes a motte and the surviving part of the bailey, together with the
remains, above and below ground, of a manorial complex.

The castle motte is situated on the north side of the site. It is oval in
shape, 5-6m high with a flatish top and measures 38m from east-west and 25m
north-south. To the east of the motte is a flat bailey area extending for 20m
and enclosed by a ditch. The bailey ditch section survives for a length of
35m, is 15m wide and 2m deep. On its outer east side it has a slight outer
bank 1m high. Excavations in advance of the by-pass road which now truncates
the site on the north side revealed evidence that the motte had been built
around a substantial stone building measuring 7m x 5m with walls standing at
up to 2m high. The exact nature and function of this early building is not
fully understood. The castle was built by Hugh de Grantmesnil towards the end
of the 11th century. It was beseiged and eventually destroyed by Henry II in
1176.
Subsequently the site was re-used as the location for a medieval manorial
complex. Extant and below ground ruins of this manor survive in the area to
the south of the motte, some incorporated into the buildings of Old Hall which
now occupy the site. The most visible ruined wall not incorporated into
later buildings extends for some 15m south-eastwards from the churchyard wall
which lies to the west of the monument. This ruined wall stands 2m high and
within its fabric are the remains of a doorway and window as well as part of a
supporting buttress. This wall is shown on a map dated 1757 as extending
towards the end of the surviving building to the south-east known as the
`tower' and is hence interpreted as the exterior wall of the southern range of
the manorial complex. Further stretches of ruined walling also survive
incorporated into modern garden walls in the area to the south of the motte.
There are known to be the remains of other manorial buildings within the
immediate area and, further research may show the complex to extend further.
This medieval manor is thought to have been established soon after the
abandonment of the motte and bailey. A chapel is mentioned in 1343 which a
description of 1371 calls the `olde chapel' and is also depicted on the map of
1757, (the present church was built on a new site in 1840). Other buildings
mentioned in early sources include a cloister, a long house called a sheepcote
and a dovecote. The present Groby Old Hall, built in stone, was the home of
the Greys before 1446. It was extended in bri-ck in the late 15th century.
The buildings of the Old Hall are listed grade II* and are excluded from the
scheduling together with all pathways and modern walls, other than those
incorporating medieval fabric. The ground beneath all these features is
included in the scheduling.

The large motte at Groby is a good survival incorporating a rare substantial
internal Norman stone building. The associated manorial complex is one of the
most extensive in Leicestershire with a core considered to date to the period
of the Norman castle. It also has associations with an important
Leicestershire family.