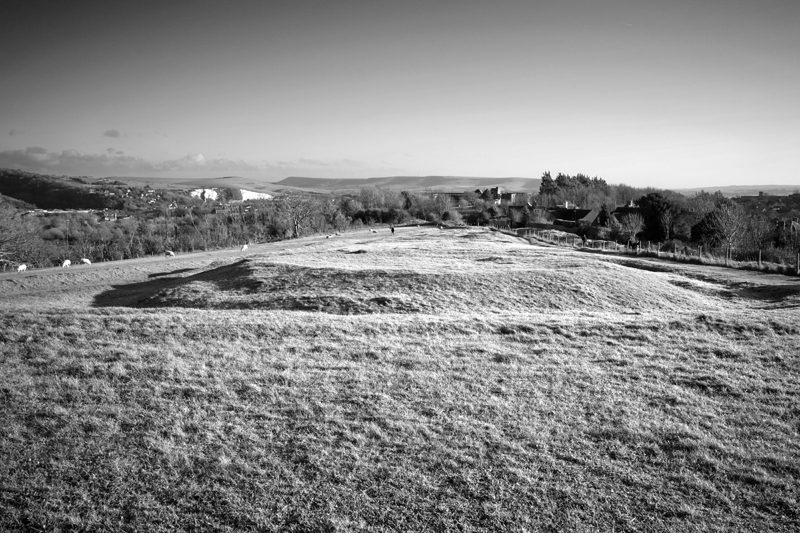 The monument includes three round barrows which form a north west-south east
aligned, linear barrow group situated on a spur of the Sussex Downs. To the
north west is a platform barrow which has a slightly raised, circular, central
area 20m in diameter. This platform is enclosed by a ditch 6m wide and 0.8m
deep, from which material used to construct the barrow was excavated. This has
been partially damaged by the construction of a modern track on its north
eastern edge. A low bank which encircles the ditch survives as an earthwork 1m
wide and 0.4m high on the south eastern side of the barrow.
Around 30m to the south east is a bowl barrow which has a circular mound 19.5m
in diameter and 0.75m high, which has been partially disturbed on its north
eastern side by the adjacent track. A large trench dug into the centre of the
mound indicates partial excavation some time in the past. Surrounding the
mound is a ditch which has become infilled over the years, but which survives
as a buried feature c.2m wide.
A further bowl barrow is situated c.30m to the south east. This has a mound
measuring up to 13.2m in diameter, also with a slight central hollow
indicating partial excavation. Adjacent tracks have partially disturbed the
barrow to the south west and north east. The mound, however, survives to a
height of 0.75m, and is surrounded by an infilled ditch c.2m wide.
The metalled surfaces of the modern tracks which cross the monument on its
south western and north eastern sides are excluded from the scheduling,
although the ground beneath them is included.

Platform barrows, funerary monuments dating to the Bronze Age (2000-700 BC),
are the rarest of the recognised types of round barrow, with fewer than 50
examples recorded nationally. They occur widely across southern England with a
marked concentration in East and West Sussex and can occur either in barrow
cemeteries (closely-spaced groups of barrows) or singly. They were constructed
as low, flat-topped mounds of earth surrounded by a shallow ditch,
occasionally crossed by an entrance causeway. None of the known examples
stands higher than 1m above ground level, and most are considerably lower than
this. Due to their comparative visual insignificance when compared to the
larger types of round barrow, few were explored by 19th century antiquarians.
As a result, few platform barrows are disturbed by excavation and,
consequently, they remain a poorly understood class of monument. Their
importance lies in their potential for illustrating the diversity of beliefs
and burial practices in the Bronze Age and, due to their extreme rarity and
considerable fragility, all identified platform barrows would normally be
considered to be of national importance.

Bowl barrows, the most numerous form of round barrow, are funerary monuments
dating from the Late Neolithic period to the Late Bronze Age, with most
examples belonging to the period 2400-1500 BC. They were constructed as
earthen or rubble mounds, sometimes ditched, which covered single or multiple
burials. They occur either in isolation or grouped as cemeteries and often
acted as a focus for contemporary 'flat' burials and for burials in later
periods. There are over 10,000 surviving bowl barrows recorded nationally
(many more have already been destroyed), occurring across most of lowland
Britain. Often occupying prominent locations, they are a major historic
element in the modern landscape and their considerable variation of form and
longevity as a monument type provide important information about the diversity
of beliefs and social organisation amongst early prehistoric communities. They
are particularly representative of their period and a substantial proportion
of surviving examples are considered worthy of protection.
Despite some minor scrub encroachment and past disturbance caused by the
construction of the adjacent tracks and excavation, the linear round barrow
group west of Nevill Road survives comparatively well. The platform barrow
survives in particularly good condition and is the best example of this type
of barrow in East Sussex. The monument will contain archaeological remains and
environmental evidence relating to the precise function of the barrows and the
landscape in which they were constructed. Its association with a Neolithic
causewayed enclosure and a further group of broadly contemporary round barrows
c.700m to the north east, provides evidence for the importance of this area of
downland for ceremonial and funerary practices during the Late Neolithic
period and the Bronze Age.