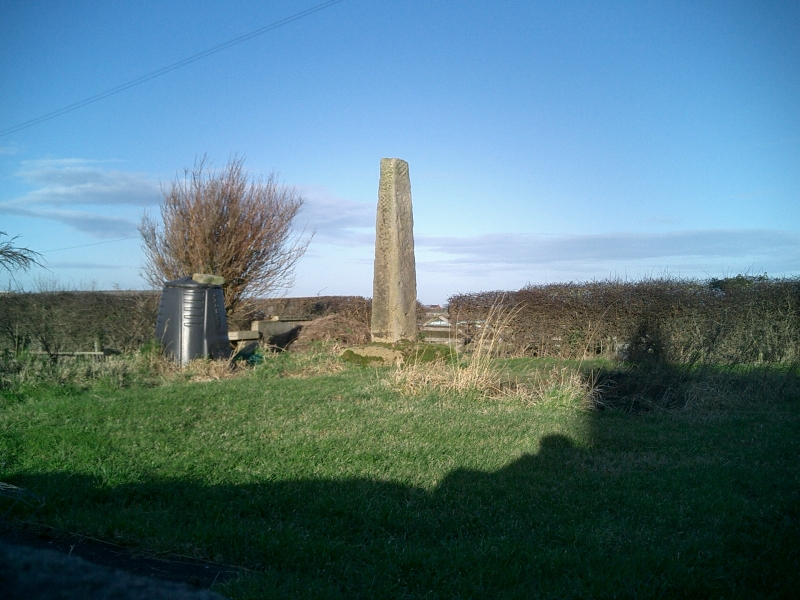 The monument includes a wayside cross known as Hawsker Cross set up beside an
old road from Whitby Abbey to Robin Hood's Bay. It stands in a vegetable
garden 100m east of Hawsker Hall Farm.
The cross consists of a stone base split into two halves at the socket hole
and a shaft broken off below the head. The base is of fine yellow sandstone,
measuring 1.07m on the north side and 0.86m on the west side. The base stone
is 0.31m high. The socket is 0.51m by 0.41m and the shaft is cemented into it.
The shaft stands 1.84m high and is 0.36m by 0.22m at the base, tapering to
0.29m by 0.18m at the top.
The cross shaft is decorated with fine interlace carving on the north east and
south sides, although the patterns are badly eroded. The west side bears a
vine scroll carving. On the east and west sides are faint traces of figure
carving as well. At the corners a simple roll moulding defines the carved
panels. The style is of the Anglo-Scandinavian period and dates from the
tenth century.
The garden wall to the west of the cross is excluded from the scheduling
although the ground beneath it is included.

Hawsker Cross wayside cross survives well in spite of losing its head. It is a
fine example of the late Anglo-Scandinavian type of sculpture. It gives us
insight into the beliefs of the medieval period and may mark a boundary of
the Whitby Abbey lands on the south side. This may be compared to the cross at
Swarth Howe to the north west of Whitby.