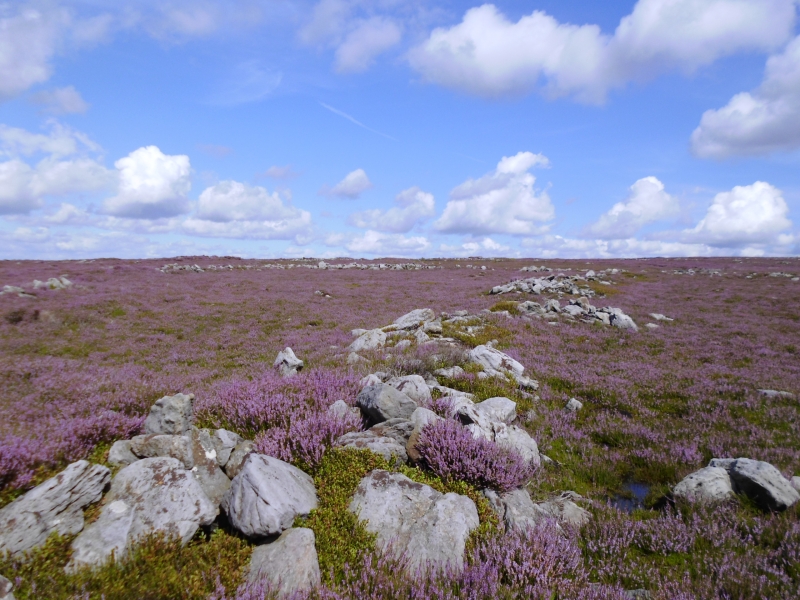 The monument includes an irregular field system comprising a number of
cultivation plots defined by stony banks, upwards of 300 clearance cairns and
two hut circles on the south west facing spur at the southern edge of
Snilesworth Moor. The system extends over an area of some 900m north-south by
300m east-west lying between the 280m and 310m contours.
At the northern end of the monument the cultivation plots are delineated by
collapsed stone walling linking clearance heaps. To the south west the system
becomes less coherent and is reduced to a string of clearance cairns with
occasional lengths of walling. There is more than 1500m of walling throughout
the site. The clearance cairns are distributed throughout the monument. They
are mostly round in shape, ranging in size from 1.5m to 8m in diameter and
standing between 0.2m and 0.7m high. There are a number of oval and elongated
cairns interspersed throughout the site. At the north east of the monument,
within the field system and cairnfield, lie two hut circles. These are visible
as two rings of tumbled stone walling with diameters of 5m and 12m
respectively. The walling stands to a height of 0.5m. These hut circles
indicate some form of settlement associated with the field system.
There are other examples of field systems, clearance cairns and hut circles on
the Hambleton Hills. They provide evidence of territorial organisation marking
the division and exploitation of land for agricultural and social purposes.

Irregular aggregate field systems are one of several methods of field layout
known to have been employed in England from the Bronze Age to the Roman period
(c.2000 BC-AD 400). They comprise a collection of field plots, generally
lacking conformity of orientation and arrangement, containing fields with
sinuous outlines and varying shapes and sizes. Field edges are variously
defined by lines of clearance cairns, stone walls, banks of earth and rubble,
ditches, fences and lynchets. Groups of clearance cairns are often associated
with the field systems. Some buildings (usually stone hut circles) lie within
irregular aggregate field systems and are sometimes physically attached to a
boundary. The field systems are often located around or near ceremonial and
funerary monuments. This type of field system developed over a period of time
through the aggregation of field plots according to the needs of the
prevailing agricultural regimes and the abilities of the communities that used
them. They are an important element of the existing landscape and are
representative of farming practice over a long period. A substantial
proportion of surviving examples are considered worthy of protection.
This monument is a well preserved example of a field system which includes an
extensive cairnfield and at least two hut circles. The occurrence of hut
circles within a field system is rare in this area. Significant information
about the original form and evidence of earlier land use beneath the monument
will be preserved.
This monument is associated with a number of similar field systems and round
barrows in this part of the Hambleton Hills. There are similar groups of
monuments in the eastern and central areas of the North York Moors providing
an important insight into land use, agricultural development, social structure
and the exploitation of resources during the prehistoric period.