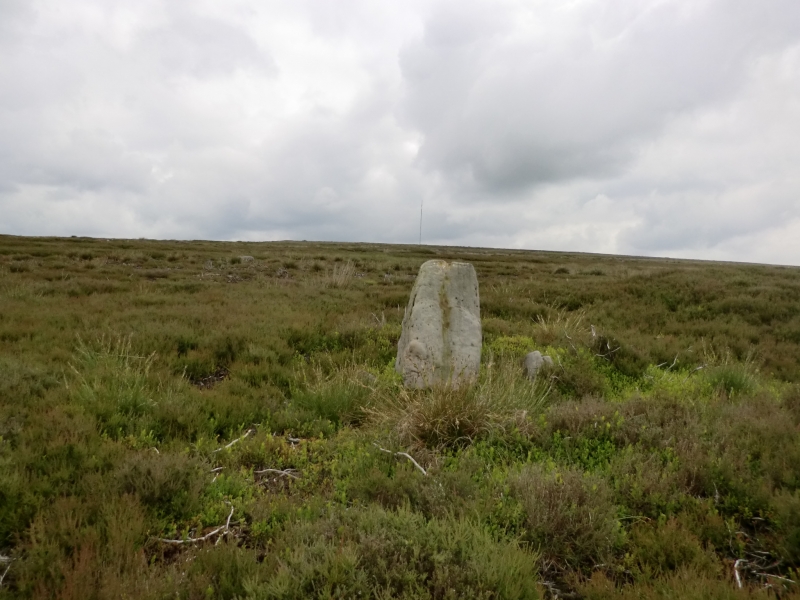 Entry Name: Cairnfield on the south west of Hawnby Moor including a round barrow and a standing stone

The monument includes a cairnfield extending over an area 670m by 140m on the
south west flank of Hawnby Moor. Also included is a round barrow and a
standing stone.
The cairnfield consists of 169 cairns spreading south west-north east for a
distance of 670m. Most of these are round in shape and range in diameter from
1.5m to 8m and in height from 0.2m to 1m. There are several cairns which are
elongated but no higher than 1m. There are also low banks of earth and stone,
some straight but others with curves in them. None of these banks exceed 25m
in length and they are all 3m wide and 0.3m high. The banks do not form any
overall pattern. They are interpreted as part of the field system indicated by
the clearance cairns.
In the north east of the monument is a round barrow. It has an earth and stone
mound standing 0.5m high. It is round in shape and 8m in diameter. The centre
of the mound has been dug into in the past. The mound was surrounded by a
ditch up to 3m wide which has become filled in over the years and is no longer
visible as an earthwork.
The standing stone is situated about 200m to the south west of the barrow. It
is a vertical slab 1m high, 0.9m wide and 0.3m thick which leans to the south
east. There are other similar monuments on this part of the Hambleton Hills
also associated with barrows. They provide evidence of agricultural practices
and the organisation of land in the prehistoric period.
The grouse butts at the south end of the monument are excluded from the
scheduling although the ground beneath is included.

This monument is well preserved and contains over 150 cairns, several lengths
of linear earthwork and a round barrow. It is part of a pattern of similar
monuments in this area which will contain significant information about the
development of agricultural and ritual practice and provide important insight
into the continuity of use in the prehistoric period.