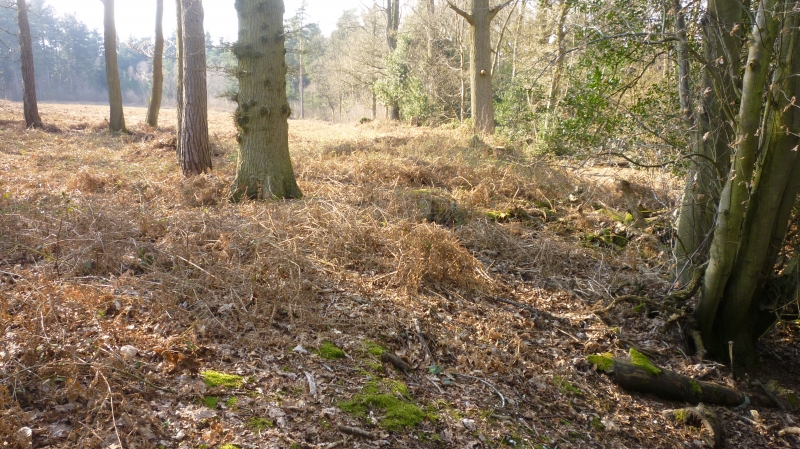 The monument includes a slight univallate hillfort of probable Iron Age date
c.1km to the north west of the Roman town of Calleva.
The hillfort lies at the eastern point of a spur of higher ground overlooking
Kiln Pond and West End Brook to the north and a tributary of the latter to the
south east. The proximity of the site to Calleva may indicate a territorial or
defensive association with the Iron Age precursor of the Roman town.
The hillfort is bisected by a track, the northern and western part of the
hillfort being in woodland and the remainder in pasture. The pasture was
formerly cultivated and the eastern and southern bank and ditch have been
levelled, the ditch surviving as a buried feature known from aerial
photographs. The hillfort has maximum internal dimensions of c.160m (east to
west) by c.120m north to south. An entrance opposed by a short external bank
and ditch lies at the western side of the hillfort.
The main bank and ditch are best preserved at the western side of the site
where both are up to 5m wide, the bank rising up to 2.2m above the base of the
ditch. The southernmost upstanding section of the bank, which also marks the
western boundary of a field, is up to 0.8m higher than the interior ground
level. Both bank and ditch gradually reduce in size around the northern side
of the enclosure, the eastern bank having a maximum height of only 0.3m by
the track. The bank and ditch opposite the entrance have been damaged by tree
planting and felling, but the bank is up to 4m wide, the ditch c.10m wide and
c.0.7m deep. There are no indications of internal features, nor are there any
known records of archaeological investigation of the enclosure.
Excluded from the scheduling are the track bisecting the hillfort and all
fencing and associated posts, but the ground beneath these features is
included.

Slight univallate hillforts are defined as enclosures of various shapes,
generally between 1ha and 10ha in size, situated on or close to hilltops and
defined by a single line of earthworks, the scale of which is relatively
small. They date to between the Late Bronze Age and Early Iron Age (eighth -
fifth centuries BC), the majority being used for 150 to 200 years prior to
their abandonment or reconstruction. Slight univallate hillforts have
generally been interpreted as stock enclosures, redistribution centres, places
of refuge and permanent settlements. The earthworks generally include a
rampart, narrow level berm, external ditch and counterscarp bank, while access
to the interior is usually provided by two entrances comprising either simple
gaps in the earthwork or an inturned rampart. Postholes revealed by excavation
indicate the occasional presence of portal gateways while more elaborate
features like overlapping ramparts and outworks are limited to only a few
examples. Internal features included timber or stone round houses; large
storage pits and hearths; scattered postholes, stakeholes and gullies; and
square or rectangular buildings supported by four to six posts, often
represented by postholes, and interpreted as raised granaries. Slight
univallate hillforts are rare with around 150 examples recorded nationally.
Although on a national scale the number is low, in Devon they comprise one of
the major classes of hillfort. In other areas where the distribution is
relatively dense, for example, Wessex, Sussex, the Cotswolds and the
Chilterns, hillforts belonging to a number of different classes occur within
the same region. Examples are also recorded in eastern England, the Welsh
Marches, central and southern England. In view of the rarity of slight
univallate hillforts and their importance in understanding the transition
between Bronze Age and Iron Age communities, all examples which survive
comparatively well and have potential for the recovery of further
archaeological remains are believed to be of national importance.

The hillfort south west of Pond Farm is part of a complex of earthworks lying
south and west of Calleva (Roman Silchester) which is thought to be associated
with the town's Iron Age precursor. Despite the levelling of the south eastern
part of the hillfort, the remainder survives well and will contain
archaeological and environmental information relating to the construction, use
and abandonment of the monument. It will also enhance our understanding of
territorial division and defence in the pre-Roman period.