A Scheduled Monument in Holmesfield, Derbyshire 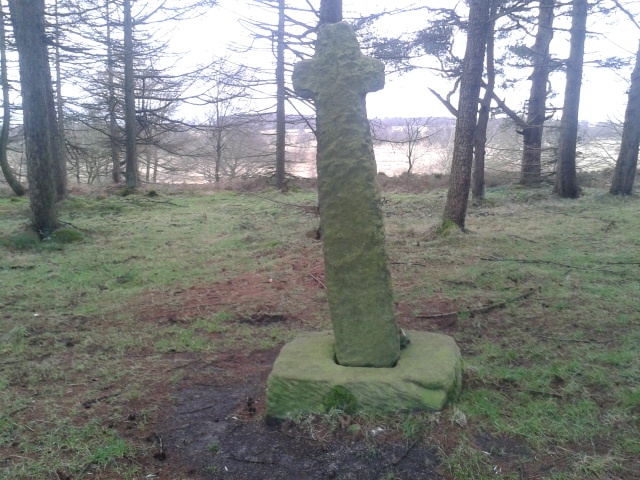 The monument is the southernmost example of two medieval wayside crosses
located on either side of Fox Lane approximately 450m apart. It comprises a
chiselled sandstone cross set into a square socket hole in a roughly dressed
rectangular socle or cross base which measures 30cm high by 105cm north-south
by 87cm east-west. The arms and top section of a somewhat eroded but largely
intact cross head form a single unit with the cross shaft which is of
rectangular section and tapers slightly towards the top. Its maximum width is
38cm north-south by 25cm east-west and it stands 188cm above the socle though
it may, originally, have been slightly taller. Fox Lane is a modern road which
follows an ancient route across Ramsley Moor in the East Moors of the Peak
District. A number of hollow ways flanking the lane represent the remains of
the earlier route served by the two crosses.

The cross in Shillito Wood is a well-preserved example of a simple wayside
cross set in its original location on a route across formerly open moorland.
It is unusual in that it includes an integral shaft and cross head but is
generally similar in appearance to its partner on the opposite side of Fox
Lane. It also lies outside the two main areas of distribution for wayside
crosses.