A Scheduled Monument in Burgh, Suffolk 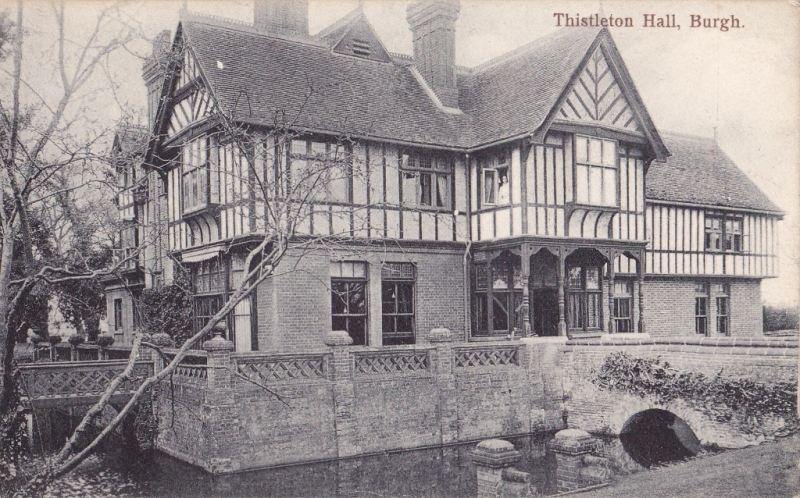 The monument includes the complex moated site at Thistleton Hall which is
located on high ground 300m east of the boundary between the parishes of
Burgh and Clopton. Three separate moats, of differing size and character,
enclose the site of the hall itself and two distinct but contiguous areas
around it to the east and the south-west. There are two ponds, one internal
and one external, associated with the moats. These various features appear to
be the result of two or more periods of construction.
The core of the site is a rectilinear island with maximum internal dimensions
of 25m north-south by 22m east-west, surrounded by a water-filled moat
approximately 2m deep and ranging from 5m to 9m in width. Both the inner face
of the moat and the outer edge, except on the west side, are revetted with
brick but the outer edge also shows evidence of landscaping, including a
terrace with a scarp approximately 0.5m high on the north side. The northern
and eastern arms of the moat are crossed by single-arched brick bridges and
the brick footings of a timber bridge remain alongside the southern arm.
Thistleton Hall itself, which was demolished during World War II when the
surrounding area was in use as an airfield, occupied almost the whole of the
central island. The external appearance was modern, as a result of alterations
carried out in the later 19th century, but the interior included features of
late 16th or early 17th-century date and parts are said to have dated from
the 14th century.
An outer moat encloses a much larger area around the south and west sides of
the first, the overall dimensions being 115m north-south by 95m east-west. The
western and southern arms of this second moat, measuring 5m to 7m in width and
up to 2m in depth, are seasonally wet. The eastern arm, which returns towards
the south-eastern corner of the inner moat, is of similar width but dry.
Alongside it, at the southern end, is an internal bank, 4.5m wide and
approximately 0.5m in height. A fourth arm of the outer moat, on the north-
western side, has been filled in, although it survives as buried feature and
the line of its outer edge is preserved in a drainage ditch.
An L-shaped internal pond, up to 2m deep and with arms approximately 30m in
length, defines the north and east sides of a rectangular enclosure within the
south-western angle of the outer moat, and the southern end of its western arm
is connected by a sluice to the southern arm of the moat. The surface of the
area within this enclosure is raised approximately 0.5m above the level of the
ground surface beyond. The pond and the raised platform have the character of
ornamental features within a 16th or early 17th-century formal garden,
surrounding the hall and bounded by the outer moat.
Opposite the eastern arm of the central moat a third moat, water-filled and
measuring 4m to 11m in width, encloses the south and east sides and the north-
eastern part of a rectangular platform with internal dimensions of
approximately 45m north-south by 40m east-west. The western end of the
northern arm of the moat has been filled in, although the infilled section
will survive as a buried feature.
Immediately alongside the western arm of the third moat, at the southern end,
is a sub-rectangular external pond measuring approximately 37m in length and
up to 10m in width. The pond, which was probably used for maintaining stocks
of fish for domestic use, is connected to the south-eastern corner of the moat
by a channel and sluice approximately 1.5m long. A ditch approximately 3m
wide, on the south side of this moat and connected to the south-eastern
corner, appears to have been an integral part of the water management system
and is included in the scheduling. Part of it has been filled in but will
survive as a buried feature.
On the northern edge of the site is a large, irregular pond of modern date
and the southern edge of this, which encroaches on the edge of the moated
site across a line between the opposed ends of the northern arms of the two
outer moats, is not included in the scheduling. A pheasant-rearing pen,
located to the south of the inner moat, is excluded from the scheduling,
although the ground beneath it is included.

The moated site at Thistleton Hall includes a wide variety of features and
the earthworks survive well. The sequence of moats here, which have been added
to during the occupation of the site, illustrates the development of a major
moated house over an extended period of time. In particular, it is likely that
parts of the moated system represent the conversion of what was originally a
defensive feature into ornamental gardens. The site will retain important
archaeological information concerning the construction and use of the site
during the medieval and early post-medieval periods.