A Scheduled Monument in Colwich, Staffordshire 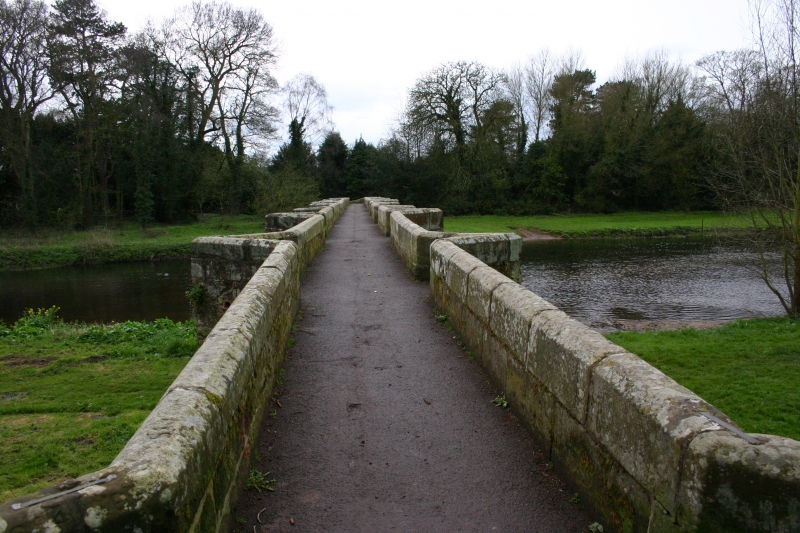 This record was the subject of a minor enhancement on 10 June 2015. The record has been generated from an "old county number" (OCN) scheduling record. These are monuments that were not reviewed under the Monuments Protection Programme and are some of our oldest designation records.

The monument includes a multi-span bridge over the River Trent, to the west of Great Haywood and at the east end of Shugborough Hall estate. The structure has over 14 segmental arches with cutwaters to both sides, spanning a length of 100m and the width between the two parapets measures up to 2m. The parapets are topped by chamfered coping and above the cutwaters are passing bays. The bridge was mentioned by Chetwyn in 1679 who stated that Shugborough was joined to Haywood by a wooden bridge which being in a ruinous state was rebuilt in stone, containing 43 arches. If this source is correct then the present day bridge dates back to at least the 17th century and the monument today is much reduced in length from its original form. The bridge was recorded as being repaired in 1583 which confirms a bridge existed at the site in the 16th century.

The bridge is also a Grade 1 listed building (NHLE 1079635) and stands within the Grade I Registered Historic Park and Garden at Shugborough (NHLE 1001167).

Multi-span bridges are structures of two or more arches supported on piers. They were constructed throughout the medieval period for the use of pedestrians and packhorse or vehicular traffic, crossing rivers or streams, often replacing or supplementing earlier fords. During the early medieval period timber was used, but from the 12th century stone (and later brick) bridges became more common, with the piers sometimes supported by a timber raft. The bridge abutments and revetting of the river banks also form part of the bridge. Where medieval bridges have been altered in later centuries, original features are sometimes concealed behind later stonework, including remains of earlier timber bridges. The roadway was often originally cobbled or gravelled. The building and maintenance of bridges was frequently carried out by the church and by guilds, although landowners were also required to maintain bridges. From the mid-13th century the right to collect tolls, known as pontage, was granted to many bridges, usually for repairs; for this purpose many urban bridges had houses or chapels on them, and some were fortified with a defensive gateway. Medieval multi-span bridges must have been numerous throughout England, but most have been rebuilt or replaced and less than 200 examples are now known to survive. As a rare monument type largely unaltered, surviving examples and examples that retain significant medieval and post-medieval fabric are considered to be of national importance.

The multi-span pack-horse bridge known as Essex Bridge, 220m east of Shugborough Hall, dates back to at least the 17th century, and an earlier timber bridge is likely to have predated it. Though reduced in its length, Essex Bridge still remains one of the longest, if not the longest surviving packhorse bridge in England. Archaeological features may also survive beneath and near to the existing structure, which will contain important information about any earlier timber bridges, its construction and use.