A Scheduled Monument in Hereford, Herefordshire, 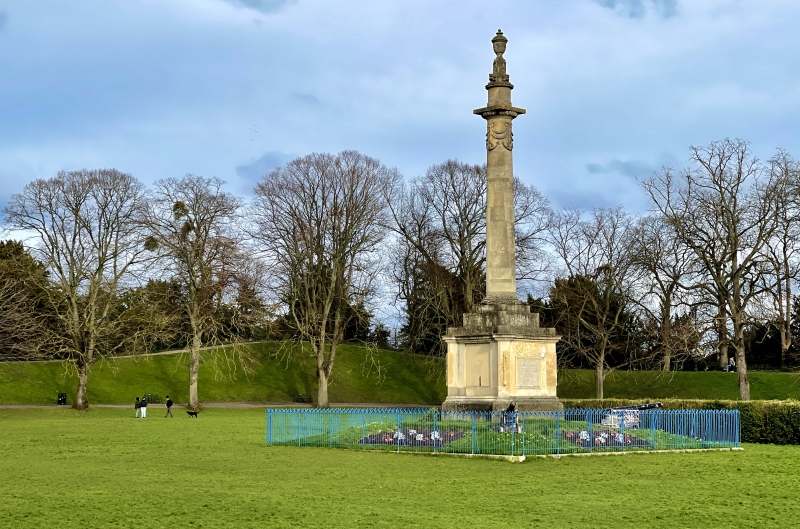 This record was the subject of a minor enhancement on 27 May 2015. The record has been generated from an "old county number" (OCN) scheduling record. These are monuments that were not reviewed under the Monuments Protection Programme and are some of our oldest designation records.

The monument, which falls into two separate areas of protection, includes a multi-period historic asset situated in the area known as Castle Green on the north eastern bank of the River Wye in the south eastern corner of the walled city of Hereford. Utilised as a public open space, Castle Green contains a multi-period landscape which includes a motte and bailey castle, Anglo-Saxon cemetery, pre-Conquest monastery, college and church.

The motte and bailey castle survives as a series of defensive earthworks relating to the bailey with other buried deposits and structures. The motte was described by Leland (amongst others) writing in the 16th century to be very strong and very high with a single great tower. Excavations in 1968-9 demonstrated that massive levelling had taken place in the 17th century when the motte was dismantled and its surrounding ditch backfilled and it is no longer visible on the surface but to the north the bailey rampart and its water filled outer ditch are clearly visible with the bank standing up to 6.5m high, to the east the bank is up to 8.8m above the ground surface although the ditch is buried, to the south there is a low bank above the river and to the west there is a slight visible scarp to indicate the ditch between the bailey and motte. A plan drawn in the late 17th century indicated the position of a round tower at the north east angle, a square tower at the south east angle and a gatehouse in the centre of the northern side but these are not visible as above ground features.

The castle was built by William FitzOsbern, the Earl of Hereford soon after the Conquest although it possibly occupied the site of an even earlier military structure indicated by the 1968-9 excavations. It reached its peak in the 13th century when most of the stone walling and towers were built and was documented as declining slowly until it received a brief revival during the Civil War. It was largely dismantled in 1660.

The castle occupies the same site as an Anglo-Saxon Church (possibly a minster) which was associated with a pre-Conquest monastery and college dating back to the 7th century. This survives as entirely buried features and deposits. It is known from documentary sources to have been dedicated to St Guthlac and was associated with a large burial ground which continued in use until the 19th century. Partial excavations in 1973 recovered 87 inhumations the earliest of which were radiocarbon dated to around AD 920 and featured men, women and children. However, later burials were found to be predominantly of children and infants. The monastery converted into a Benedictine house in 1101, but following the First English Civil War (between King Stephen and the Empress Matilda) when it was damaged and became ruinous in around 1143 it was rebuilt outside the city.

The interior of the bailey which had already undergone remodelling in 1660 was landscaped during 1752 when the castle green was leased to ‘The Society of Tempers’ whose aim was to promote amicability and good temper, they also built a stone grotto. Following dissolution of the society in 1831 it became a publically maintained open space. A chance find of a Roman altar was made in the moat before 1882 but this is now lost.

From the time of St Augustine's mission to re-establish Christianity in AD 597 monasticism formed an important facet of both religious and secular life in the British Isles. Settlements of religious communities including monasteries were built to house communities of monks, canons (priests), and sometimes lay- brothers, living a common life of religious observance under some form of systematic discipline. The main components of the earliest monasteries might include two or three small timber or stone churches, a cemetery and a number of associated domestic buildings, contained within an enclosure or vallum as was the case at Hereford.

The earliest sites were not markedly dissimilar from contemporary secular settlements, although their ecclesiastical role may be indicated by the presence of objects indicating wealth and technological achievement, such as stone sculpture, coloured glass, inscriptions, high quality metalwork and pottery. Only the church and leading secular figures are thought to have had access to the skills and trade networks which produced such goods. Later foundations in the 10th and 11th centuries generally had one major stone church and a cemetery. By this time other domestic buildings were more regularly aligned, often ranged around a cloister. Documentary sources indicate the existence of 65 early monasteries. Of these, less than 15 can at present be linked to a specific site.

Anglo-Saxon inhumation cemeteries consist predominantly of inhumation burials which were placed in rectangular pits in the ground, occasionally within coffins. The bodies were normally accompanied by a range of grave goods. The cemeteries vary in size, the largest containing several hundred burials. Around 1000 inhumation cemeteries have been recorded in England. They represent one of our principal sources of archaeological evidence about the early Anglo-Saxon period, providing information on population, social structure and ideology.

Motte castles are medieval fortifications introduced into Britain by the Normans. They comprise a large conical mound of earth or rubble, the motte, surmounted by a palisade and a stone or timber tower. In the majority of examples an embanked enclosure containing additional buildings, the bailey, adjoined the motte. Motte castles and motte and bailey castles acted as garrison forts during offensive military operations and as strongholds. In many cases they were aristocratic residences and the centres of local or royal administration. Between the Conquest and the mid 13th century, usually during the 12th century, a number of motte and bailey castles and ringworks were remodelled in stone. In the case of mottes, the timber palisade was replaced by a thick wall to form a `shell keep'. If the tower on the motte was of timber, this may also have been replaced in masonry and, if a bailey was present, its ramparts were often strengthened with a curtain wall. Within the keep, buildings for domestic or garrison purposes were often constructed against the inside of the keep wall. Although over 600 motte castles or motte and bailey castles are recorded nationally, examples converted into shell keeps are rare with only about 60 sites known to have been remodelled in this way. As one of a restricted range of recognised post-Conquest monuments, they are particularly important for the study of Norman Britain and the development of the feudal system.

The multi-period historic asset at Hereford Castle Green is known from partial excavations to hold archaeological and environmental evidence for all of its many periods and types of use. The monument will contain still further evidence of the development, construction, social, political and strategic importance of this city through time, its religious development, trade, industry, communication, development and adaptive re-use as well as the overall landscape context of these various phases of activity.