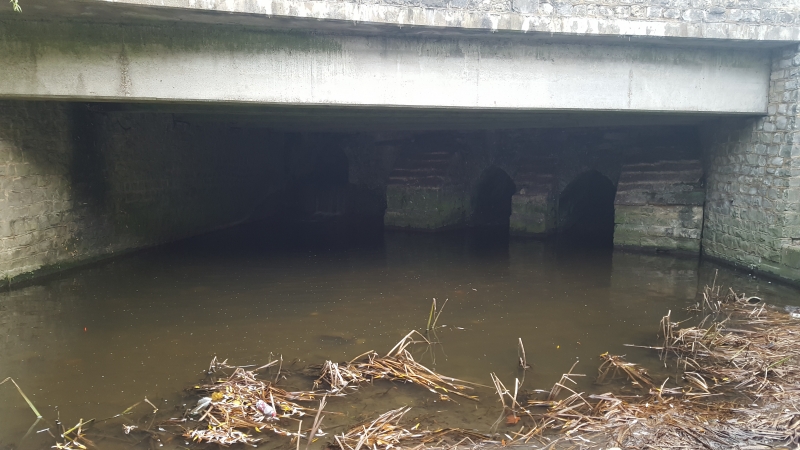 This record was the subject of a minor enhancement on 17 March 2015. This record has been generated from an "old county number" (OCN) scheduling record. These are monuments that were not reviewed under the Monuments Protection Programme and are some of our oldest designation records.

The monument includes a medieval multi-span bridge surviving as upstanding and below-ground remains. It is situated over the River Len, near its confluence with the River Medway in Maidstone. The bridge was built in the 14th century and is constructed of stone with two narrow pointed arches flanked by buttresses and a more recent floodgate beside them. The floodgate is edged with brick.

A modern concrete bridge is now superimposed above the medieval bridge and projects beyond it. Len Bridge is, however, preserved beneath the modern bridge and is visible from Palace Gardens to the west.

Multi-span bridges are structures of two or more arches supported on piers. They were constructed throughout the medieval period for the use of pedestrians and packhorse or vehicular traffic, crossing rivers or streams, often replacing or supplementing earlier fords. During the early medieval period timber was used, but from the 12th century stone (and later brick) bridges became more common, with the piers sometimes supported by a timber raft. Most stone or brick bridges were constructed with pointed arches, although semicircular and segmental examples are also known. A common medieval feature is the presence of stone ashlar ribs underneath the arch. The bridge abutments and revetting of the river banks also form part of the bridge. Where medieval bridges have been altered in later centuries, original features are sometimes concealed behind later stonework, including remains of earlier timber bridges. The roadway was often originally cobbled or gravelled. The building and maintenance of bridges was frequently carried out by the church and by guilds, although landowners were also required to maintain bridges. Medieval multi-span bridges must have been numerous throughout England, but most have been rebuilt or replaced and less than 200 examples are now known to survive. As a rare monument type largely unaltered, surviving examples and examples that retain significant medieval and post-medieval fabric are considered to be of national importance.

Although it is now underlying a modern cantilevered road bridge, Len Bridge survives well. It is still visible from the west and retains a significant amount of medieval fabric including two fine pointed stone arches.