A Scheduled Monument in Aylesford, Kent 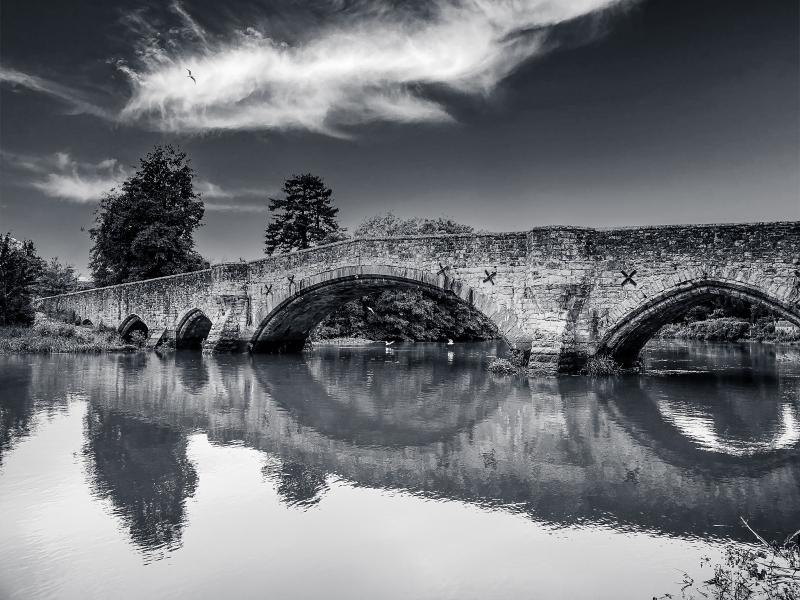 This record was the subject of a minor enhancement on 15 December 2014. The record has been generated from an "old county number" (OCN) scheduling record. These are monuments that were not reviewed under the Monuments Protection Programme and are some of our oldest designation records.

The monument includes a medieval multi-span bridge situated over the River Medway at Aylesford.

Aylesford Bridge is constructed of Kentish ragstone with seven arches including a central segmental arch and six pointed and double-chamfered outer arches. The bridge is about 4m wide between the centres of the stone-coped parapet. The end arches are partly buried by the river bank. The stone piers have cutwaters on the upstream and downstream sides on rebuilt concrete foundations. On each side are octagonal and triangular canted pedestrian refuges resting on buttresses over the piers. Below the bridge is a barge-bed constructed from large baulks of timber.

Aylesford Bridge is thought to have been constructed in about the 14th century, and is situated downstream from the probable site of an earlier ford. A grant of pontage was issued in 1331, although it is possible that this relates to a timber predecessor. In about 1824, the two centre arches were replaced by a single arch of 18m span, removing a pier to allow passage for larger river traffic.

Aylesford Bridge is Grade I listed.

Multi-span bridges are structures of two or more arches supported on piers. They were constructed throughout the medieval period for the use of pedestrians and packhorse or vehicular traffic, crossing rivers or streams, often replacing or supplementing earlier fords.

During the early medieval period timber was used, but from the 12th century stone (and later brick) bridges became more common, with the piers sometimes supported by a timber raft. Most stone or brick bridges were constructed with pointed arches, although semicircular and segmental examples are also known. A common medieval feature is the presence of stone ashlar ribs underneath the arch. The bridge abutments and revetting of the river banks also form part of the bridge. Where medieval bridges have been altered in later centuries, original features are sometimes concealed behind later stonework, including remains of earlier timber bridges. The roadway was often originally cobbled or gravelled. The building and maintenance of bridges was frequently carried out by the church and by guilds, although landowners were also required to maintain bridges. From the mid-13th century the right to collect tolls, known as pontage, was granted to many bridges, usually for repairs; for this purpose many urban bridges had houses or chapels on them, and some were fortified with a defensive gateway. Medieval multi-span bridges must have been numerous throughout England, but most have been rebuilt or replaced and less than 200 examples are now known to survive. As a rare monument type largely unaltered, surviving examples and examples that retain significant medieval and post-medieval fabric are considered to be of national importance.

Despite some later alterations and repair work, Aylesford Bridge is a well preserved medieval multi-span bridge. It is a good example of its type and will retain evidence relating to medieval bridge construction and masonry techniques. Deposits buried underneath the bridge will preserve valuable artefactual, ecofactual and environmental evidence, providing information about the human and natural history of the site prior to the construction of the bridge.