A Scheduled Monument in Mancroft, Norfolk 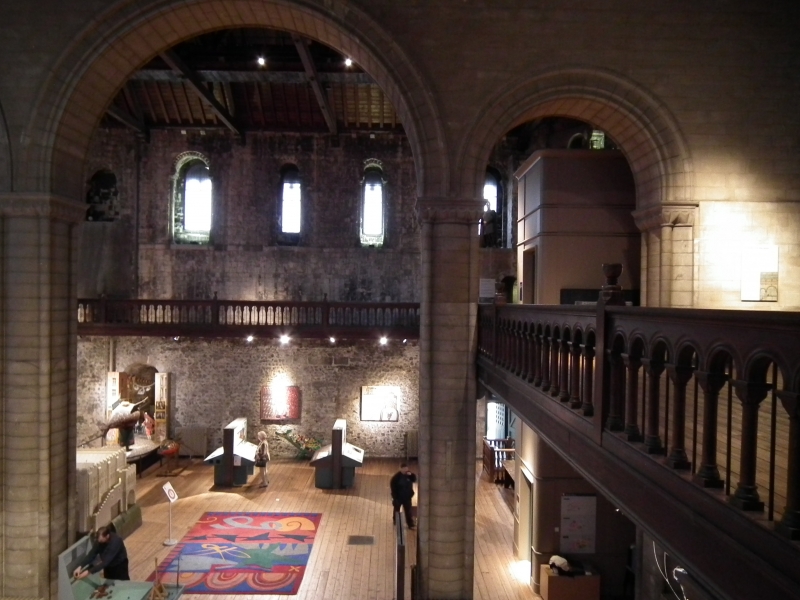 The monument includes the earthworks and buried remains of Norwich Castle, including the Castle mound and its moat, and part of the north-east bailey.

DESCRIPTION
The scheduled area includes the castle mound and surrounding moat, as well as its north east bailey. At its base the castle mound measures about 145 metres from west to east, and 135 metres from north to south, and at the top, about 110 metres at its widest from south-west to north-east, and 95 metres from north-west to south-east. The top is flat, with almost the entire area occupied by the donjon and late C19 prison. The donjon is a 30.5 metre square structure sited towards the south-west, with the octagonal prison attached to its east and north sides. The donjon and prison, which remain in use as a museum, are listed at Grade I (NHLE entry 1372724) and are not included in the scheduling. The base of the castle mound is revetted by a modern low brick wall, from west of the bridge to the south, continuing around the west and north. Excavations undertaken in 1905-1906, to the east of the mound, revealed its stratification, indicating layers of loam, marl, gravels and chalk.

The greatest depth of the ditch, cut into solid chalk, is estimated to be between 22.5 and 13.5 metres. The ditch survives only to the south of the mound, where it would originally have been considerably wider. A footpath runs along the present base of the ditch, underneath the bridge that gives access to the Castle Museum. Although this was refurbished in 1825, with lodges constructed in 1811 to designs by Frances Stone, excavation has demonstrated that the medieval bridge survives substantially intact beneath its later stone cladding, including the vaults of the C13 gatehouse. The bridge consists of a southern and northern abutment and central arch. To the west and north of the mound, encroachment and infilling have levelled the ditch, over which there now runs a modern road, Castle Meadow. Where this road turns south, to the east of the mound, it becomes Market Avenue, which appears to follow the edge of the east bank of the infilled moat. The area to the east of this, where the land falls away gradually, formed a part of the defended meadow that was the east bailey. The baileys to the south of the castle mound, ditch and bridge were substantially removed by archaeological investigations and the subsequent construction of the Castle Mall shopping centre, and no longer form part of the scheduled area.

EXTENT OF SCHEDULING
The scheduled area includes the castle mound and surrounding moat, as well as a part of the castle’s north-east bailey. The area is defined by a boundary drawn around the presumed outer edge of the moat to south and west, following the upper edge of the bank to the south, around the south end of the bridge and its two lodges, and excluding all land in the ownership of Castle Mall, including Castle Green. As the line of the boundary leaves Castle Gardens to the west, it travels north-west, crossing the road, Castle Meadow, diagonally to meet the south corner of Castle House. It then follows the street line of the buildings to the west, north-west and north of Castle Meadow to the point where that road merges with Market Avenue and Agricultural Plain. From this point the line is drawn to capture as much as possible of the north-east bailey, curving around the south-east corner of the property at the corner of Castle Meadow and Redwell Street, projected to be the northern edge of the north-east bailey, and crossing Redwell Street at a point that allows for the capture of the north ditch. The boundary then curves south-east from the north side of Agricultural Plain, following the line of the Redwell Street properties before turning to the south at a point to the north of the north-east corner of Hardwick House (immediately east of Anglia House). It then follows the east side of Crown Road, with the intention of capturing the east ditch of the north-east bailey, crossing Cattle Market Street to meet the pavement to the south, where it turns to travel towards the corner of Market Avenue and Cattle Market Street before turning north-west to follow the south-west side of Market Avenue and the boundary with Castle Mall, joining the outer edge of the moat south of Shirehall Chambers. The intention of the boundary here is to capture the south ditch of the north-east bailey and part of the south bailey ditch where it meets the castle moat east of Shirehall Chambers.

Norwich Castle, a post-Conquest motte and bailey castle is scheduled for the following principal reasons:

* Period: the castle mound, moat and north-east bailey of Norwich Castle typify both a particular class of monument, the motte and bailey castle, and a period, the Norman invasion and conquest of England, and represent one of only a few classes of monument from this period;

* Rarity: although not rare as a class, each motte or motte and bailey castle is of value for its contribution to our understanding of the process of subjugation following the conquest, and the development of lordship and the feudal system in Norman England. Norwich Castle is relatively rare for the state of preservation of the C12 donjon (not included in the scheduling, but listed at Grade I), and for the evidence gathered from the extensive excavation of the south baileys in the late C20. Of greater rarity are the remains of Anglo-Saxon Norwich which underlie the castle and its north-east bailey;

* Documentation: although the date of construction of the castle is not recorded, its subsequent history is increasingly well documented. Archaeologically, the castle is very well documented by the publication of the reports of the excavations within the area of the south baileys, undertaken in advance of the construction of Castle Mall, and by earlier excavations undertaken in the late C19 and early C20;

* Group Value: the most significant association with the scheduling of the castle is the donjon, listed at Grade I, particularly its early fabric, the survival of which adds significantly to the importance of the earthwork remains. The castle is also surrounded by listed buildings and several scheduled monuments, but has closest group value with medieval structures, foremost of which is the cathedral, listed at Grade I, the origins of which are contemporary with the enlarged castle mound and donjon. It also has group value with the two scheduled cathedral gates, the Erpingham Gate and St Ethelbert’s Gate, C15 and C14 respectively, both scheduled and listed at Grade I;

* Survival / Condition: the survival in good condition of archaeological deposits was demonstrated by the excavations undertaken in the late C20 in advance of the construction of Castle Mall;

* Vulnerability: the location of the monument in the heart of a thriving city, forming part of a well used garden, and at the centre of a road network that runs over the infilled castle moat means that buried archaeological deposits are vulnerable to interventions, and possible damage;

* Diversity: archaeologically the castle contains diverse features, including the possible survival of late Anglo-Saxon deposits. It also represents a class of monument significant for its diversity of form;

* Potential: stray finds and formal excavations undertaken over the past century, particularly those carried out in the late 1980s in advance of the construction of Castle Mall, indicate that those unexcavated parts of the monument are likely to contain material of similar quality and quantity, evidence of material, social, economic and military history, from the late Anglo-Saxon period onwards, applicable in both a local and national context. The potential for the survival of evidence of Norman colonisation of the late Anglo-Saxon town is particularly significant.