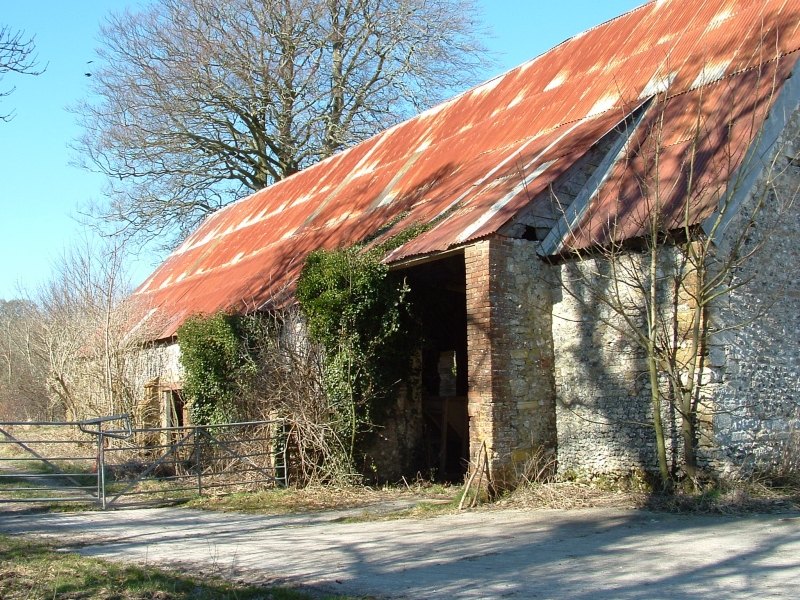 This record was the subject of a minor enhancement on 16 December 2015. This record has been generated from an "old county number" (OCN) scheduling record. These are monuments that were not reviewed under the Monuments Protection Programme and are some of our oldest designation records.

This monument includes a tithe barn situated on the western side of the settlement of Sydling St Nicholas in the grounds of Court Farm. The 16th century tithe barn survives as a roughly rectangular plan stone built building with original aisled roof timbers and replacement roof standing to full height. It has two stage buttresses, gable ends, a porch on the north side and two sets of opposed entrances. It has nine and a half bays and has been shortened at the eastern end. The timber roof has longitudinal and transverse bracing to the aisle posts and tie beams with queen posts. It is the most westerly aisled barn in Dorset. According to Hutchins in 1863 a beam in the roof bore the initials ‘LUW 1590’ and stood for Lady Ursula Walsingham.

The church in medieval Britain was of vital importance in all parts of life, not just deaths, baptisms and marriages. Church services were the framework of everyday existence and the strict calendar of festivals, Saint’s Days and events laid out by church authority were pivotal. Not only were charges levied for all services provided by the church, but peasants and farmers were expected to provide labour for free and one tenth of their yearly produce to the church as a form of tax called a tithe. Failure to pay tithes was likely to result in eternity spent in Hell undergoing torment, a fate regularly re-iterated during services to ensure parishioners fully complied. The tithe normally took the form of a tenth of the harvested grain which had to be stored in specially constructed barns known as tithe barns which could be extremely grand buildings exhibiting the best aspects of local building methods and materials. The tithe barn 55m south east of St Nicholas’s Church survives well retaining much of its original form and most original features including its roofing timbers and remains the most westerly aisled barn in Dorset.