A Scheduled Monument in Cutcombe, Somerset 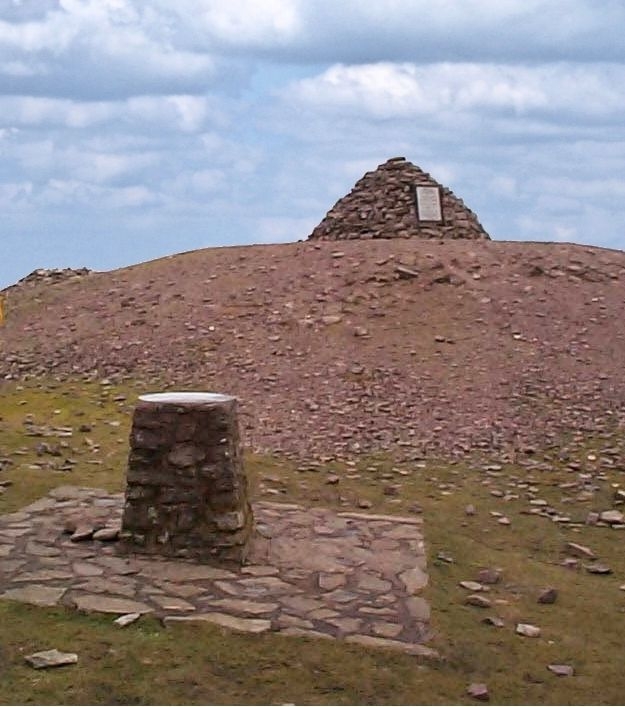 Four round cairns and a platform cairn forming part of a round cairn cemetery with a beacon and associated shelter at Dunkery Beacon.

This record was the subject of a minor enhancement on 23 July 2015. This record has been generated from an "old county number" (OCN) scheduling record. These are monuments that were not reviewed under the Monuments Protection Programme and are some of our oldest designation records.

This monument, which falls into three areas, includes four round cairns, a platform cairn and a possible beacon hearth or watchman’s shelter situated at the summit of a prominent hill called Dunkery Beacon the highest point in Somerset. The cairns form part of a larger round cairn cemetery. Dunkery Beacon is a round cairn which was re-used as a beacon and is now surmounted by a modern conical monument. It is depicted on a map of 1687 with a beacon in the form of a round tower and was partially excavated in 1807 with no results. The cairn survives as an oval stony mound measuring up to 34m long and 27m wide with a flat circular top some 15m in diameter and is up to 1.7m high. On top is a beehive shaped monument erected in 1935 and built of cemented stones which measures up to 5.5m in diameter and 3.3m high. On the west side of the cairn is an Ordnance Survey triangulation pillar. The monument and pillar are excluded from the scheduling but the cairn beneath is included. Largely contiguous with the main cairn are three further round cairns. Immediately west is a flat topped circular stony mound of up to 20m in diameter and 0.5m high which merges with Dunkery Beacon. Whilst immediately to the north is a second contiguous stony mound measuring up to 20m in diameter and 0.2m high and has been disturbed by two large pits and has been re-used for bonfires. To the west is a further small circular mound measuring 2.7m in diameter and 0.3m high. To the south east is a platform cairn which measures up to 20m in diameter and has a perimeter bank of small stones measuring up to 0.4m high around a central platform which is approximately 0.3m high, there are also visible stones representing up to two internal kerbs. To the north west is a small almost square enclosure with rounded corners which measures up to 5m square and is defined by a bank with coursed walling at the base which stands up to 0.4m high. It has been variously described as a watchman’s hut or a beacon hearth.

Exmoor is the most easterly of the three main upland areas in the south western peninsula of England. In contrast to the other two areas, Dartmoor and Bodmin Moor, there has been no history of antiquarian research and little excavation of Exmoor monuments. However, survey work has confirmed a comparable richness of archaeological remains, with evidence of human exploitation and occupation from the Mesolithic period to the present day. Many of the field monuments surviving on Exmoor date from the later prehistoric period, examples including stone settings, stone alignments, standing stones, and burial mounds (barrows or cairns). Platform cairns are funerary monuments covering single or multiple burials and dating to the Early Bronze Age (c.2000-1600 BC). They were constructed as low flat-topped mounds of stone rubble up to 40m in external diameter. Some examples have other features, including peripheral banks and internal mounds, constructed on this platform. A kerb of edge-set stones sometimes bounds the edges of the platform, bank or mound, or all three. Platform cairns occur as isolated monuments, in small groups, or in cairn cemeteries. In the latter instances they are normally found alongside cairns of other types. Although no precise figure is available, current evidence indicates that there are fewer than 250 known examples of this monument class nationally. This is a rare monument type exhibiting considerable variation in form.

Round cairns are funerary monuments dating from the Late Neolithic period to the Late Bronze Age, with most examples belonging to the period 2400-1500BC. They were constructed as rubble mounds which covered single or multiple burials. They occur either in isolation or grouped as cemeteries, and often acted as a focus for burials in later periods. Over 370 barrows or cairns, varying in diameter from 2m to 35m, have been recorded on Exmoor, with many of these found on or close to the summits of the three east-west ridges which cross the moor - the southern escarpment, the central ridge, and the northern ridge. Individual cairns and groups may also be found on lower lying ground and hillslopes. Those which occupy prominent locations form a major visual element in the modern landscape. Their longevity as a monument type can provide important information on the diversity of beliefs and social organisation amongst early prehistoric communities. They are particularly representative of their period. Beacons were fires deliberately lit to give a warning, by means of smoke by day and flame by night, of the approach of hostile forces. They were always sited in prominent positions, usually as part of a group, chain or line which together made up a comprehensive early warning system covering most of the country. Beacons were extensively used during the medieval period. Their use was formalised by 1325 and although some were used later, for example at the time of Monmouth's Rebellion in 1685 or during the Napoleonic wars, the system was in decay by the mid-17th century. Beacons were initially bonfires of wood or furze, but later barrels of pitch or iron fire baskets mounted on poles were used. The poles were occasionally set on earthen mounds. Access to the fire basket was by way of rungs set in the pole, or by a stone ladder set against the beacon. More unusual beacon types include stone enclosures and towers, mainly found in the north and south west of England. Beacons were built throughout England, with the greatest density along the south coast and the border with Scotland. Although approximately 500 are recorded nationally, few survive in the form of visible remains. Many sites are only known from place-name evidence. Given the rarity of recorded examples, all positively identified beacons with significant surviving archaeological remains such as watchman’s shelters for example are considered to be of national importance. Despite some visitor pressure and adaptive re-use the four round cairns and a platform cairn forming part of a round cairn cemetery with a beacon and associated shelter at Dunkery Beacon survive comparatively well and indicate the long established use and importance of this extremely prominent hill through time for territorial, funerary and communication purposes.