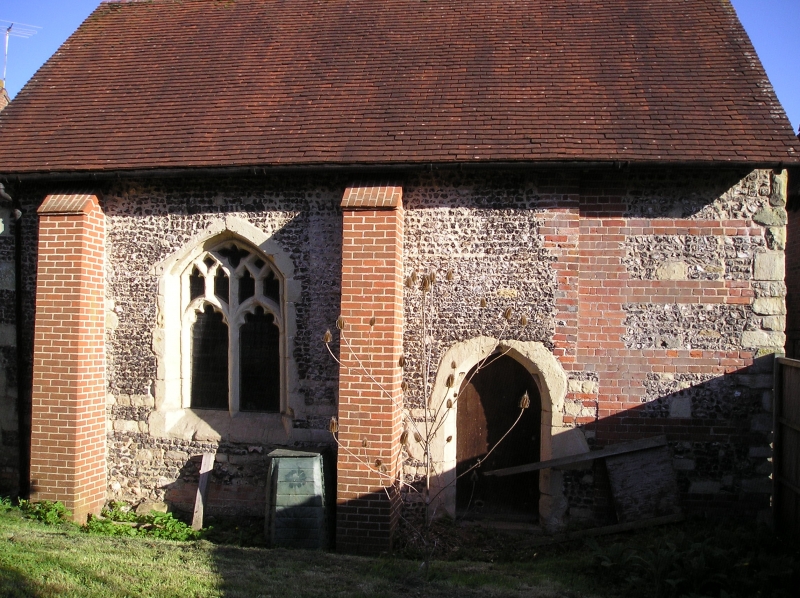 This record was the subject of a minor enhancement on 17 December 2015. The record has been generated from an "old county number" (OCN) scheduling record. These are monuments that were not reviewed under the Monuments Protection Programme and are some of our oldest designation records.

The monument includes a medieval chapel situated on the south eastern side of Blandford Forum. The chapel survives as a small restored rectangular stone and brick built building standing to full height with a replacement roof and modern strengthening buttresses. There are original traceried windows and moulded pointed doorways. The building dates to the 15th century and was originally associated with St Leonard’s Hospital for lepers founded in 1282.
The chapel is Listed Grade II.

A medieval hospital was a religious or secular institution which provided spiritual and medical care. Half of the hospitals were suppressed by 1539 as part of the Dissolution of the Monasteries. A small number of hospitals were established solely for the treatment of leprosy. These leper houses were specifically located and arranged to deal with contagious disease. Their main aim was to provide the sufferer with permanent isolation from society. In contrast to other hospitals they were normally located away from population foci. The medieval chapel called St Leonard’s Chapel formed part of such a hospital. The chapel contained a range of furnishings and fittings appropriate for Christian worship in the pre-Reformation period. The chapel was designed for congregational worship and was probably originally divided into two main parts: the nave, which provided accommodation for the laity, and the chancel, which was the main domain of the priest and contained the principal altar. Chapels were often abandoned as their communities and supporting finances declined or disappeared after the Dissolution in the 1540s.

Despite subsequent re-use as a barn and restoration the chapel will retain archaeological and environmental evidence relating to its construction and specific use as a chapel within a leper hospital.