A Scheduled Monument in Bramley, Hampshire 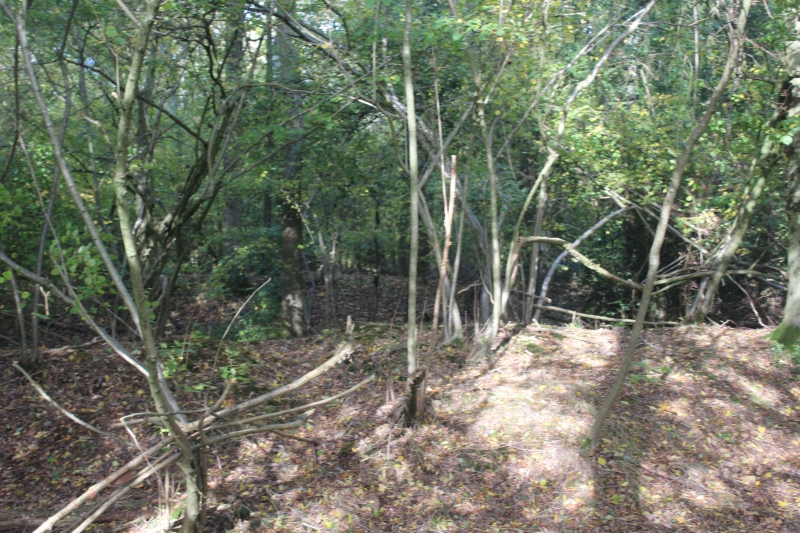 The monument includes a multivallate Iron Age hillfort called Bullsdown camp surviving as earthworks and below-ground remains. It is situated on a slight plateau to the north of Bow Brook near its confluence with the River Loddon.

The hillfort is oval in shape and encloses an area of about four hectares (10 acres). On the east side of the hillfort the earthworks include an inner bank, a ditch, a wide berm with a bank on its outer lip, another ditch and an outer bank. On the west, however, the natural slope falls about 3m across the ramparts and the defences are defined by a wide terrace with upper and lower scarps, made by levelling the slope, and a ditch and outer bank. There is an entrance at the north-west defined by a break in the earthworks with the outer bank inturned across the line of the ditch. On the north-east side of the hillfort, for a distance of over 100m, the earthworks have been largely destroyed through later activity.

Small multivallate hillforts are defined as fortified enclosures of varying shape, generally between 1 and 5ha in size and located on hilltops. They are defined by boundaries consisting of two or more lines of closely set earthworks spaced at intervals of up to 15m. These entirely surround the interior except on sites located on promontories, where cliffs may form one or more sides of the monument. They date to the Iron Age period, most having been constructed and occupied between the sixth century BC and the mid-first century AD. Small multivallate hillforts are generally regarded as settlements of high status, occupied on a permanent basis. Recent interpretations suggest that the construction of multiple earthworks may have had as much to do with display as with defence. Earthworks may consist of a rampart alone or of a rampart and ditch which, on many sites, are associated with counterscarp banks and internal quarry scoops. Access to the interior is generally provided by one or two entrances, which either appear as simple gaps in the earthwork or inturned passages, sometimes with guardrooms. The interior generally consists of settlement evidence including round houses, four and six post structures interpreted as raised granaries, roads, pits, gullies, hearths and a variety of scattered post and stake holes. Evidence from outside numerous examples of small multivallate hillforts suggests that extra-mural settlement was of a similar nature. Small multivallate hillforts are rare with around 100 examples recorded nationally. Most are located in the Welsh Marches and the south-west with a concentration of small monuments in the north-east. In view of the rarity of small multivallate hillforts and their importance in understanding the nature of settlement and social organisation within the Iron Age period, all examples with surviving archaeological remains are believed to be of national importance.

Despite damage to the earthworks at the north-east, the Iron Age multivallate hillfort called Bulls Down Camp survives well and is a good example of its type. The hillfort has not been excavated and will hold potential for archaeological investigation. The site will contain archaeological and environmental information relating to the construction, use and occupation of the hillfort, and the landscape in which it was constructed.