A Scheduled Monument in Amlwch, Isle of Anglesey (Ynys Môn) 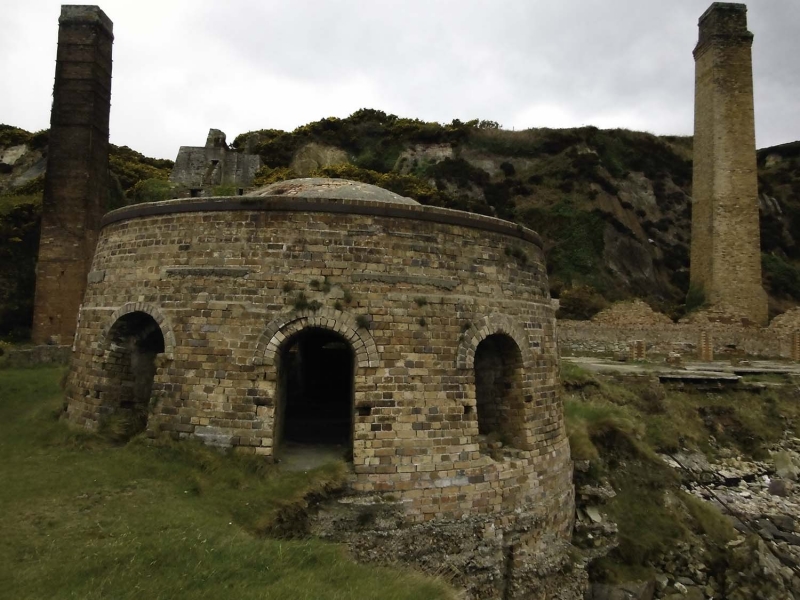 The monument comprises a remarkably intact example of an early 20th century silica brickworks and associated quarries and harbour located in a spectacular coastal setting on a low promontory on the western side of Porth Wen Bay. Most of the present buildings were completed by 1929, replacing a smaller 19th century works of uncertain form that were abandoned by 1900. The works were decommissioned by 1949, when most of the machinery and tramway was removed, the lack of land access apparently being a decisive factor.

The remains include a pair of silica quarries to the west and north-west linked to the manufacturing works on the shore and their harbour by a tramroad incline with a surviving stone-built winding engine house and at its head. The main works occupy a relatively compact levelled and partly natural platform retained by concrete and boulder built sea walls; most of the buildings are of brick with some masonry and concrete elements, including a number of concrete floors and working surfaces. The principal structures include a crushing house at the base of the incline for reducing the quartzite into powder, a second engine house, two near-intact tall square plan chimneys and the remains of a third, moulding / brick making sheds and separate hand moulding area, two drying sheds, three distinctive brick-built ‘beehive’ kilns to the east, and a substantial warehouse and adjacent quay at the northern end of the site, from which goods were loaded by a fixed crane, the base of which survives. There are a number of other lesser ancillary structures that may have formed stores, workshops and offices.

The quarries lie to the north and west of the works although there seems to have been another smaller one to the south and there are signs of quarrying on the slopes immediately to the west of the principal structures. The tramroad incline supported twin tracks and was gravity powered; the track was removed when the works closed but the embankment, its revetment walls and track bed remain largely intact. The winding engine house above the quarries is a masonry rubble structure and may belong to the pre 20th century works. It consists of a pair of parallel battered walls and retains timber and cast-iron elements of its mechanism including the drive shaft and three wheels, two of which formed the drum for lowering and raising trucks on the incline, the other a band-brake. A small rendered brick shed containing the remains of a sheet metal roof to the S is likely to be a later storage building.

The crusher house at the base of the incline consists of a towering brick ruin terraced into the hillside to the west on three main levels to create a series of working floors linked by chutes and with a series of storage bins for raw materials. These were successively reduced at each level from quartzite lumps to powder. The massive cast iron remains of a stone breaker or knapper and its base, retaining the details of its manufacturer (W.M. Baxter of Leeds) survive on the upper level, along with a number of other fragments of machinery and fixings, although some of these are no longer in situ and others have recently been removed. Below these to the east is the main complex of brick-making buildings including a pair or long brick making or moulding rooms, where having been wire cut or moulded into shape mixed, the bricks were sent to an adjacent drying house at the base of the tramroad incline to the southern end of the main complex. Both of these areas have largely been reduced to their foundations and concrete floors, which bear traces of tanks and pieces of machinery. Associated with the drying house an almost intact, tall, square, tapering brick chimney stack, which is also linked to two of the firing kilns to the north-east. The drying house shows signs of having been adapted for domestic or office use at a later date.

To the north of the moulding rooms is an engine house, retaining the bearings for the shafts of a relatively small machine and adjacent to the north of this a boiler house, the brick walls of which stand to their full height in places. The boiler house has been partly demolished but retains the remains of a Stirling water-tube boiler, including parts of its cylindrical drums and pipework, with doors for firing, ash removal and maintenance. To the north of these are the remains of a larger but more ruined and possibly later drying house with another moulding room to the south-east. These retain their concrete floor footprints and the drying house its supporting pillars but only the lower stage of its western wall survives to any height, although the tall square chimney stack that served it (which is much larger than that for the southern drying house) stands to full height at the base of slope immediately to the west. The purpose of a section of tramroad bed running between this and the cliff to the west is unclear. The dried bricks were fired in a line of three well-preserved, round, dome-roofed ‘beehive’ or Newcastle kilns, which survive on open ground to the east of the main processing buildings. These were ‘down-draft’ kilns with multiple entrances to a single central chamber, each retaining a reinforcing cast iron girdle around their wall heads, their domed roofs later being capped with cement. The two southerly kilns are linked by buried flues to the chimney stack by the southern drying house. The northern kiln was linked to a third brick chimney immediately to the east, the base of which survives. Projecting onto the beach at the northern end of the site and built on a massive stone and concrete faced platform based on the shore is the impressive two storey warehouse and engineering workshop, which survives to gable height with numerous square and segmental headed windows and doorways. It also retains a combination of wooden and steel beams, lintels and other fittings.

Other buildings include the ruin of what seems to have been a small, square masonry built gunpowder store are set into the hillside to the south of the incline; this may be a 19th century structure associated with the quarries to the west. The footings of a small ancillary building of unknown function overlook the harbour to the east of the kilns. The harbour comprises two massive lengths of massive concrete faced boulder wall enclosing an area of rocky beach with entrance at the north-east corner. The retaining walls enclosing the remainder of the site are of comparable scale and construction and are clearly of more than one phase. The base of a fixed crane used for loading lies some 40m to the south of the harbour entrance.

The monument is of national importance for its potential to enhance our knowledge of post medieval and early industry. It is a remarkably intact later 19th and early 20th century brickworks illustrating the complete process of brick manufacture from the extraction of raw materials to processing, storage and the export of goods by sea. The structures themselves display a range of construction techniques and building materials and may be expected to contain archaeological information concerning chronology and building techniques and industrial architecture. Many of them are well-preserved or near intact examples of their type and retain the rare remains of their associated machinery, providing evidence of a number of different processes and developing technology. The transport facilities of the works are also well preserved and illustrate the reliance of seaborne movement of goods by many Welsh coastal industries. The whole site retains significant archaeological potential, with a strong probability of the presence of associated archaeological features and deposits. The aesthetic value of the monument is high, the ruins providing a distinctive and prominent landmark on the Anglesey Coast Path.