A Scheduled Monument in Penmaenmawr, Conwy 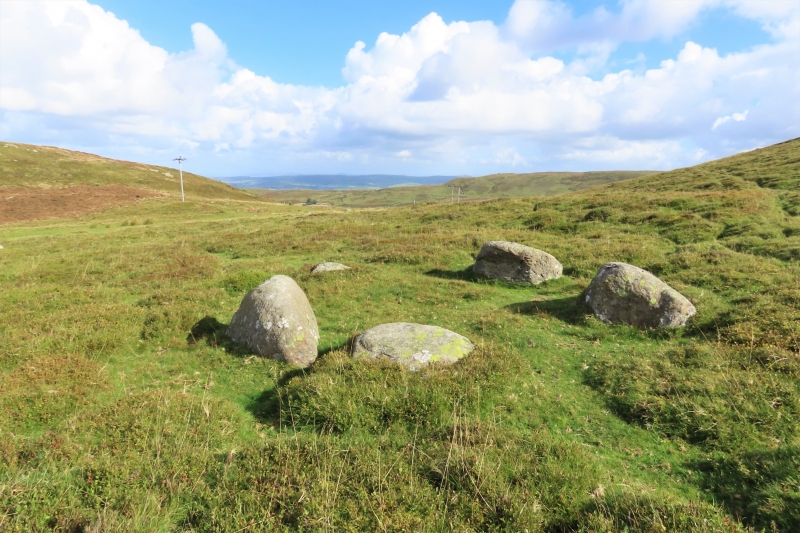 An area of the uplands above Penmaenmawr, which contains a dense coverage of prehistoric burial and ceremonial sites.

Archaeological Item # CN024A - stone circle A low stony bank, about 1m wide, containing 10-12 stone uprights, encircles a level area 24m in diameter. The tallest uprights are 2m high; there are a number of smaller orthostats, and boulders, lying within the bank; the excavators counted 29 stones which they felt made up the stone circle, but there is evidence that a number of orthostats had been removed in earlier times. An early trackway curves round the N side of the circle, and is considered to be earlier than the circle, perhaps connected with the Graig Lwyd axe factory.

Archaeological Item # CN024B - stone circle A bank of loose stone 2-2.5m wide and 0.3m high encircles an area 11.5m in diameter. This circle is situated 146m SW of CN024A, although hidden from it by a fold in the ground. The interior has been fully excavated, as has part of the ring.

Archaeological Item # CN024C - stone circle Nine low stones form a rough arc of a circle about 15m in diameter. Three of the stones on the E side have a smaller stone by their side. The S side of the circle, if it is such, lies under the track. A single stone lying E of the arc and others to the N may be a part of the same site.

Archaeological Item # CN024D - stone circle/stone setting A group of some 25 stones, now thought to represent an inner circle 3m across, with a linear feature consisting of a double line of uprights on the E side.

Archaeological Item # CN024E - mound/cairn An oval mound, 14m long N-S and 10m wide E-W, and about 1m high. A telegraph pole has been erected on the NE side of the mound.

Archaeological Item # CN024F - stones Five large boulders forming a rough circle 3m in diameter. The stones vary from 0.3 to 0.6m in height. This site has been excavated, with no major finds.

Archaeological Item # CN024H - cairn A large cairn 16m in diameter and 2.5m high. The centre of the cairn has been robbed, forming a large hole 5-6m across and 1-1.5m deep. There is a shallow ditch 1m wide, and an external bank 3m wide, around the base of the cairn.

Archaeological Item # CN024I - cairn An oval setting of 8 stones 3m by 3.5m. There are gaps on the E and N sides, but the stones are set closely together on the W and S sides.

Archaeological Item # CN024K - cairn A low grass-covered mound, 4.5m across, 0.3m high, very close to Cn024J. There is a suggestion of a slight ditch around it.

Archaeological Item # CN024L - cairn? Two arcs of low grassy bank forming an oval, with a hollowed gully or path between them on top of the rounded hill called Moelfre. Previously interpreted as a hollowed cairn. It is about 3m x 2m internally and perhaps of 5.5m diameter overall. The banks are 0.3m high at most from the external ground level.

Archaeological Item # CN024M - enclosure A circular feature noted from the air as a low shadow-mark. Although fugitive both from the air and upon the ground, it is nevertheless possible to see on the ground traces of an earthwork enclosure, some 40m in diameter. Its bank, which from the air appears to be about 2m broad, is scarecely perceptible from natural vegetation and hummock, but can be clearly observed up to about 0.25m high where the path deviates from a SW course from the Druid's Circle (CN024A).

The monument is of national importance for its potential to enhance our knowledge of prehistoric ritual and funerary activities. It retains significant archaeological potential, with a strong probability of the presence of associated archaeological features and deposits. The structures themselves may be expected to contain archaeological information concerning chronology and building techniques.