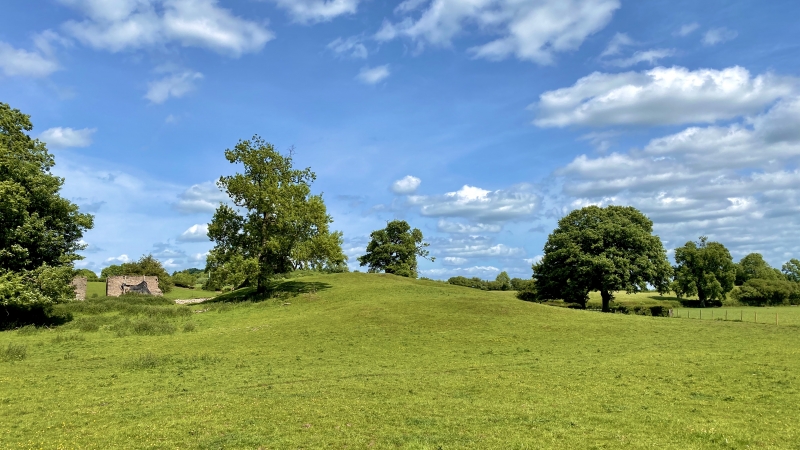 Castell Arnallt comprises the earthwork remains of a medieval defensive site and consists of a large, long, oblong mound with relatively steep, scarped sides and a flattish summit divided into upper and lower enclosures. It measures rough 87m E/W and 52m N/S, and is up to 4m high above the adjacent floodplain of the Usk. The site is larger than a normal motte, and is likely to be formed froma natural feature. Geophysical survey has revealed the presence of masonry structures on the summit of the mound and clearly marked stone footings surround the lower enclosure. Historical references indicate that this was the fortified seat or Llys of Seisyll ap Dyfnwal, the Welsh Lord of Gwent Uwchcoed and is recorded as being destroyed by William de Braose in 1175 following his infamous massacre of the Welsh leaders of Gwent Uwchoed.

The monument is of national importance for its potential to enhance our knowledge of medieval Welsh defensive and domestic architecture and is of exceptional significance in south-east Wales as the almost certain location of a documented princely llys associated with the kingdom of Gwent, of which no other examples survive in the region. There is some potential for the documented llys to occupy an earlier and equally rare early medieval site. It has high potential to retain structural evidence and intact associated deposits containing artefactual and environmental evidence of its construction, development, use and contemporary material culture and landscape with a possible fixed date for its destruction.