A Scheduled Monument in Aberffraw, Isle of Anglesey (Ynys Môn) 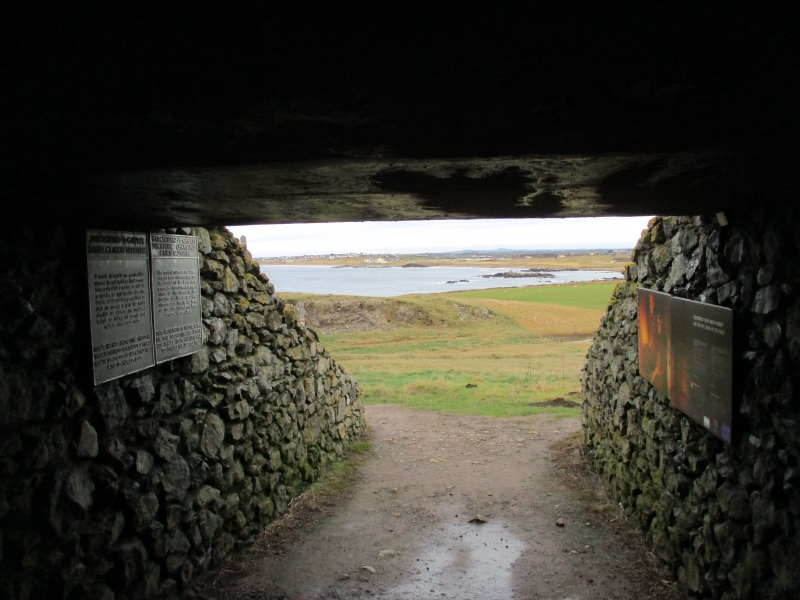 The mound seen today is a reconstruction, though it is based on the original Neolithic form. Excavations during 1952-53 revealed an earthen mound some 27m in diameter with parts of this tumulus being made up of peat turfs. The edge of the mound was loosely defined by a tight packing of stones. The tomb passage itself is entered from the north. It is some 7m long and is flanked by upright stones. This leads to a cross-shaped (cruciform) chamber, from which open three smaller side chambers to the east, west and south. Each of these would have been covered with a capstone, but only that to the south survives. The plan of the western chamber is the most complex; the front is blocked and it has a small annexe to the south. In this, the cremated remains of two men were found, together with two burnt and broken pins of bone or antler. Traces of bone were also recovered from the east and south side chambers. The central area of the tomb does not, however, appear to have been used for burial; instead it was used for ritual purposes.

The excavations uncovered one of the most exciting finds on a megalithic monument in Wales. The end stones of the east and west side chambers, and three of the inner passage stones, were found to be decorated with a variety of lightly pecked and incised designs of spirals, chevrons, zig-zags and lozenges. This type of decoration was clearly invested with some significant meaning as it occurs elsewhere on tombs of the Neolithic period.

The monument is of national importance for its potential to enhance our knowledge of prehistoric burial and ritual practices. The burial chamber is an important relic of a prehistoric funerary and ritual landscape. It retains significant archaeological potential and there is a strong probability of the presence of burial, ritual or structural evidence. The monument's importance is further enhanced by its rare rock art.

The scheduled area comprises the remains described and an area around them within which related evidence may be expected to survive. It is roughly circular and measures approximately 25m in diameter.