A Scheduled Monument in Strathallan, Perth and Kinross 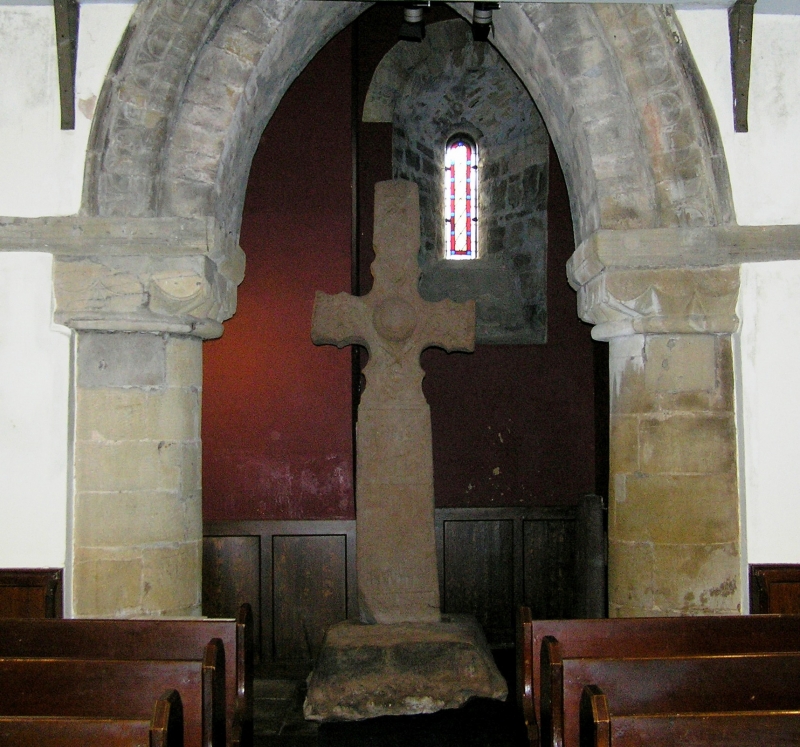 The monument comprises the buried remains of an early medieval ecclesiastical site located beneath the 12th century St Serf's Church and its graveyard. The monument is located in the Perthshire village of Dunning, around 2km south of the River Earn at about 55m above sea level.

The site is situated on locally high ground in the centre of the village. Recent excavations have provided evidence for an earlier stone built structure directly below the 12th century church tower with even earlier human remains buried beneath the structure. Relative dating places the structures and buried human remains as pre-12th century, possibly from the early medieval period.

The scheduled area is irregular on plan and includes the remains described above, as shown in red on the accompanying map. The scheduled area includes the graveyard and the ground beneath the church but specifically excludes all above-ground parts of the present church building, all active burial lairs and the above ground elements of all burial monuments, walls and fences. In addition, to allow for their maintenance, the scheduling excludes the top 20cm of existing paths. For clarity, the Kirk Gate House is not in the scheduled area.

The cultural significance of the monument has been assessed as follows

Archaeological excavation at the site, carried out in July 2013, demonstrate that the site contains the buried remains of an earlier structure. The excavations consist of a 3m by 1m trench located at the foot of the north wall of the church tower. They indicated that that the tower was contemporary with the attached nave but that the 12th century tower was built upon an earlier structure. An earlier burial was found below this structure.  This provides evidence for pre-12th century use of the site with the burial, suggesting it had an ecclesiastical purpose – likely to be an early medieval church and burial ground.

There is very high potential for buried archaeological deposits that could support a better understanding of the earlier structure and there is further potential for remains associated with this ecclesiastical building. The scheduling excludes the above ground elements of St Serf's Church, but archaeological excavation indicates that earlier church/es exist below the 12th century building and have high potential to augment our knowledge of the early history and development of this particular church site, as well as early medieval church architecture in general. Further scientific study could provide more information on the chronology of the site, including its date of origin and development sequence. Excavation of other medieval chapels has shown that they were often re-modelled and structurally adapted.

Additional burials of a similar date are likely to exist in the area around the present church. Scientific study could reveal evidence for health, diet, illness, cause of death, and perhaps the types of activities people undertook during life over a long time period. Buried artefacts and ecofacts may also provide information about the nature and use of this ecclesiastical site. The original function of the monument was likely as a place of worship and burial. The site may also have had other ceremonial or ritual uses for the local community.

Within the graveyard and on the site of the church, a fragments of Pictish carved stone have been found and dated to the 9th or 10th century AD. One piece was found in the 19th century and one was a recent discovery. The pieces appear to be part of an early carved cross. This is further evidence that St Serf's is the site of an important early medieval ecclesiastical centre.It is likely there are further similar remains buried at the site. Such carved stone monuments, or fragments of, add to our knowledge of the development of Insular art. Their presence at St Serf's is particularly significant as it could potentially inform the dating of the site. This in turn may help researchers to a better understanding of other important early Christian art in early medieval Perthshire and the wider Insular world.

There have been other excavations in the vicinity of St Serf's Church and they provide context to the site. Immediately north of the existing graveyard, in 2007, the remains of a buried feature were investigated. The results have been interpreted as a vallum; a physical delineation, typically an earthwork, marking the edge of a medieval ecclesiastical site. The feature was dated to the 8th or 9th Century AD. It is most likely this feature was an enclosure, perhaps one of a number, defining the ecclesiastical site at St Serf's.

We know of important Pictish ecclesiastical establishments at Abernethy, Scone, Forteviot and St Andrews from historical sources but physical remains are rare. Excavations and finds of carved stones suggest that Dull in Perthshire may be the site of an important early church or monastery while cropmarks suggest a monastic enclosure at Fortingall, also in Perthshire. The finds of Pictish carved stone, along with the earlier structure and burials beneath St Serf's tower make it very likely the site was an ecclesiastical centre in early medieval and Pictish periods, and therefore a rare and significant site.

St Serf's, through the remains already excavated and those likely to be preserved beneath the ground, adds to our understanding of the Christian communities in early medieval Scotland. It offers the potential to examine the connections between ecclesiastical sites and the ways that Christian culture was dispersed.

The church and tower are dedicated to St Serf, who is reputed to have lived between 500-583AD and been a contemporary of St Mungo. He believed to have established a priory at St Serf's Inch on Loch Leven, and to have founded the church at Dunning, where he died before being buried at Culross, another of his foundations.

This monument is of national importance because it makes a significant addition to our understanding of the past, in particular to early medieval ecclesiastical sites in Scotland. With its rare and well-preserved archaeology, this site has the potential to make a very significant contribution to our knowledge of church architecture, art and burial practices. Only a very small part of the site has been investigated archaeologically and the site is likely to contain significant archaeological deposits related to its use as a church site and place of burial. The deposits deriving from use and re-use of the church site may provide evidence to improve our understanding of what is a poorly understood period of Scottish history. Due to the rarity of firmly identified remains of Pictish church buildings, the loss of the monument would significantly diminish our future ability to appreciate and understand Pictish and early medieval ecclesiastical sites. The site is associated with St Serf who is attributed with the spread of Christianity across Perthshire and Fife.

Allen and Anderson, J R and J. (1903). The early Christian monuments of Scotland: a classified illustrated descriptive list of the monuments with an analysis of their symbolism and ornamentation. Edinburgh.

MacGibbon and Ross, D and T. (1896-7). The ecclesiastical architecture of Scotland from the earliest Christian times to the seventeenth century, 3v. Edinburgh.