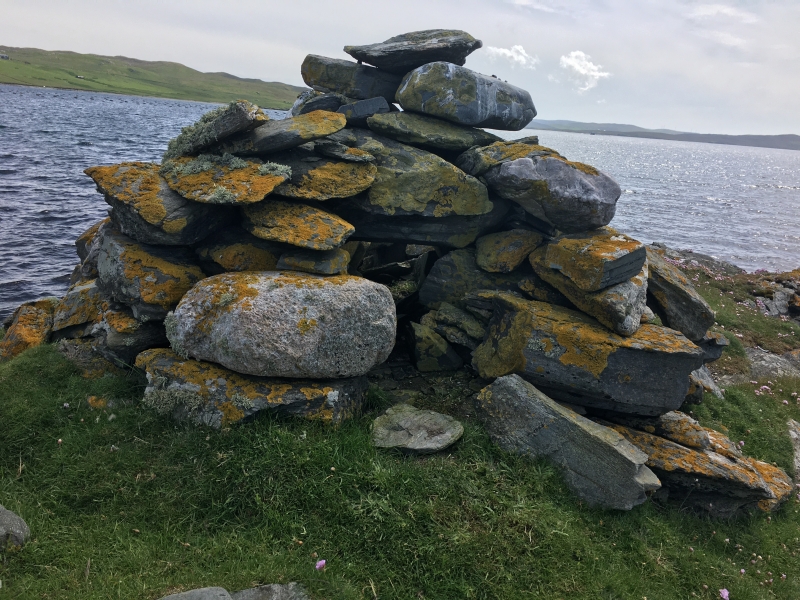 The monument comprises a trap for wild otters, or otter-house, located on the tip of a low coastal promontory.

Such traps were formerly widespread around Shetland's shores, and otter pelts were a valuable addition to local crofting incomes up until the earlier decades of the present (20th) century.

The otter-house consists of a small cairn of large stones with a hollow interior, accessed by a low, narrow doorway which was formerly furnished with a wooden door. The door closed by a counter-weighted mechanism when an otter, tempted by bait, entered the trap.

Only a few traces of the wooden elements survive, but the stone structure is in good repair, and is distinguished by the re-use of a rotary quern stone as part of its back wall - the hole in the centre allowing a clear sight into the trap.

The area to be scheduled consists only of the cairn and an area around it, a circle with an overall diameter of 2m. The area is centred on the position indicated with a red cross on the accompanying map extract.

The monument is of national importance as a very well preserved example of a small-specialised structure formerly widespread around northern coasts but now very scarce. It serves as a reminder of the wide range of ways in which natural resources helped to supplement the subsistence crofting lifestyle. (Despite the extensive trapping of otters before they received legal protection, Shetland remains the British stronghold of the species.)