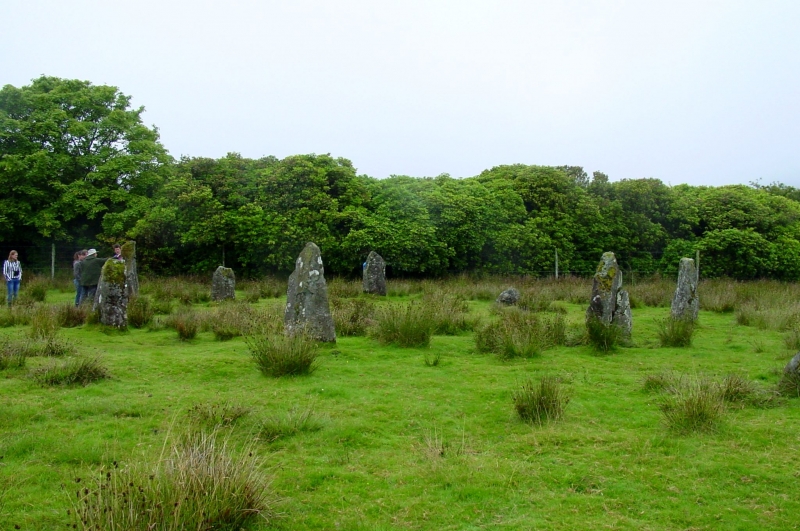 The stone circle is situated on level pasture at the head of Loch Buie at approximately 10m OD. The two other standing stones lie some 40m SW of and 115m WSW of the stone circle respectively, but within the same present parcel of land.

The stone circle originally consisted of nine stones. One of these is now missing and its position has been marked in recent times by a small boulder. The circle measures approximately 12.3m in diameter and is composed for the most part of granite slabs, which have been positioned with their flatter faces set towards the inside of the circle. The tallest stone stands about 2m high and measures c.0.85m by 0.3m at its base. An outlying standing stone, situated 4.6m SE of the circle, comprises a pointed granite block standing 0.85m high and measuring c.0.6m by 0.3m at its base.

The single standing stone situated about 40m SW of the stone circle stands about 3m high and measures c.0.85m by 0.3m at its base, tapering to a fairly narrow top. The standing stone situated about 115m WSW of the stone circle comprises a comparatively flat-sided monolith, aligned NE and SW. This stands about 2.15m high, although the top has been broken off in antiquity, and measures c.0.75m by 0.7m at its base.

Stone settings of this type are characteristic of the Neolithic period and normally date to the third millennium BC.

Three separate areas are proposed for scheduling, as marked in red on the accompanying map. These include the remains described and an area around them within which related material may be expected to survive. The three areas are as follows:

1. The largest area is sub-circular in shape, centred on the stone circle and the outlying standing stone closest to the stone circle, and has maximum dimensions of 38m NW-SE by 33m transversely. Its NW limit is defined by, but excludes, the field boundary.

2. The second area is centred on the standing stone situated about 40 SW of the stone circle and is circular in shape, measuring 10m in diameter.

3. The third area is centred on the standing stone situated about 115m WSW of the stone circle and comprises a truncated circle, with a maximum diameter of 10m. It is defined to the NW by the field boundary, which is itself excluded from the scheduling.

The monuments are of national importance because of their potential to contribute to an understanding of prehistoric ritual practices. Their importance is increased by their group value and by their proximity to other monuments of potentially contemporary date.

RCAHMS (1980), Argyll: An inventory of the monuments, Volume 3: Mull, Tiree, Coll and Northern Argyll (Excluding the early Medieval and later monuments of Iona), Edinburgh, 69-70, No. 110.