A Scheduled Monument in Perth City North, Perth and Kinross 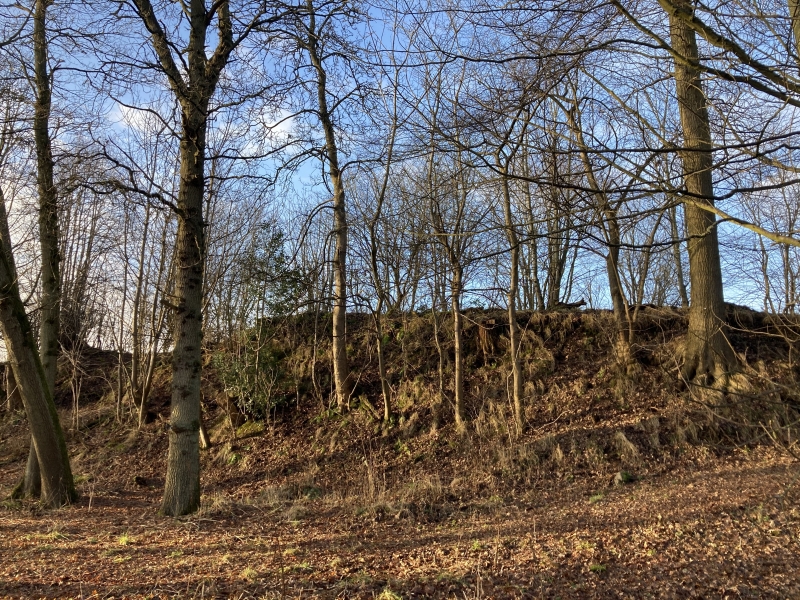 The monument comprises the remains of a Roman fort, visible as low earth banks and shallow ditches and from the air as cropmarks. The fort lies on a fluvio-glacial terrace, falling steeply at the east and south, at around 10m above sea level. The terrace sits at the confluence of the River Almond and River Tay.

The fort is sub-rectilinear with sections of the defensive ditches visible as very shallow depressions and ramparts visible as very low, now spread, earth banks on the west and north sides. These features are also visible on historic aerial images as cropmarks. The east and south sides are defined by the steep break of slope down to the riversides. Approximately halfway along the south side are two stretches of earth banks standing up to 2.5m high, these may be upstanding remains of the Roman fort. The estimated overall size of the fort is at least 3.9ha. There is evidence for an entrance and road into the fort through the northern ditch and rampart. Excavations in 1973 and geophysical surveys from 2008 onwards provided further evidence for an entrance and road on the north and internal features including barracks, rampart ovens and possible courtyard buildings as well as the defences and an internal road network.

The fort dates from the Flavian period, late first century AD, when Roman forces first entered and operated within Scotland. Small finds evidence suggests occupation of the fort is likely to have extended into the Antonine and Severian periods. The fort was part of a defensive line, known as the Gask Ridge, consisting of watchtowers, fortlets and forts running along the southern edge of the Highland Line. The fort would have also offered control over a possible crossing point of the River Tay and was a base of operation in the area.

The scheduled area is irregular, to include the remains described above and an area around them within which related material may be expected to survive, as shown in red on the accompanying map. The scheduled area excludes the above ground elements of the railway embankment and rail bridge, all fences and gates and the telegraph line.